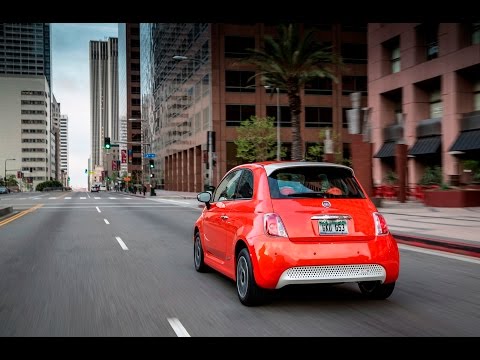 If you don't have to buy right away, watch Fiat 500e deals carefully; not only are there $199 leases, but Fiat has frequently added further incentives, making the 500e the lowest-cost car you can possibly lease.

The 2016 Fiat 500e can be viewed as the best 500 minicar, if you can live with a real-world range of 80 miles; its power is smoother, its handling is more balanced, and it's cheap to buy and run—but you can only get it in California and Oregon.

The 2016 Fiat 500e electric car remains a small, fun-to-drive, and economical plug-in minicar whose owners and lessees exult in its smooth and silent acceleration, zippy handling, and cheerful character. For its fourth model year, the 500e gets the latest Uconnect in-dash infotainment system, along with a pair of new paint colors.

The Fiat 500e is a battery-electric adaptation of the little three-door hatchback minicar that reintroduced the Italian brand to U.S. buyers in 2012. Released one year later than the various gasoline versions, the electric 500 is offered for sale only in California and Oregon.

Depending on its color, you might have to look twice to distinguish an electric Fiat 500 from its cousins with combustion engines. The 500e has unique front and rear bumper assemblies, door-sill extensions, and some other trim pieces; in darker colors, they pretty much blend in like any other 500. The electric car can also be ordered in bright orange with white contrast panels—and that one does stand out.

The interior is large similar to the gasoline 500 as well, with the substitution of a power meter and various additional screens to the display that provide operating information on the electric-drive components.

Otherwise, the 500e has the same pluses and minuses of any Fiat 500. Its interior is really only usable for two standard-size adults, though smaller adults and children can use the rear seats once they get back there. The driving position is upright, on short, high seats, and the steering wheel is a bit more horizontal than usual—and it tilts, but doesn't telescope. That makes the driving position awkward for some, depending on how they're proportioned. And there's a mere 7 cubic feet of cargo volume behind the rear seat.

Rather than a gasoline engine, transmission, fuel tank, and associated plumbing, the 500e uses a 24-kilowatt-hour lithium-ion battery pack to power a 83-kilowatt (111-horsepower) electric motor that produces 147 lb-ft of torque to power the front wheels. The EPA rates the Fiat 500e at 84 miles of range in combined city and highway driving, and a relatively high 112 MPGe for combined energy efficiency. (The Miles Per Gallon Equivalent, or MPGe, rating indicates how far an electric car can travel on the same amount of energy as contained in 1 gallon of gasoline.)

On the road, the Fiat 500e may be the most fun to drive of the entire 500 minicar range. Sure, the turbocharged 500 Abarth has an exhaust note to die for and oodles of hot-hatch personality, but you have to shift gears frequently to make the most of it, whereas the electric 500 has one long, continuous power delivery.

At the launch a few years ago, it was clear that the Fiat Chrysler engineers had surprised even themselves with how much fun the electric car is to drive. With all its battery weight down low under the floor and rear seat, it's heavier—2,980 pounds, Fiat says—but hugs the road better and is less bouncy than any gasoline 500. It's less nose-heavy than the regular 500 range, so its handling and roadholding is more balanced.

You can toss it into turns and below about 40 mph, the only major noise you'll hear will be the tire squeal that shows how close you are to its limits. It's also notably quieter, and rather like the Smart ForTwo Electric Drive, it's sort of what a small urban runabout should be—without the compromises of having to work a small engine hard to keep up with traffic.

In other words, its essential qualities combine the best of several models. It's got the smooth, torquey acceleration of any battery electric car, roadholding that's closer to the sporty Abarth than the boulevardier 500 Lounge, and real-world range close to its EPA-rated 84 miles. Fiat says 100-plus miles isn't uncommon in city use. The company is also to be commended for fitting a 6.6-volt charger, meaning that a full recharge takes less than 4 hours at a 240-volt Level 2 charging station.

While its owners and drivers love the 500e, its maker publicly resents it. Fiat Chrysler Automobiles CEO Sergio Marchionne frequently complains that the company is forced by the state of California to sell the 500e at a loss—his latest estimate is $14,000 per car—to meet its zero-emission vehicle sales mandates. Still, FCA's losses are Californians' gains, and given its truck-heavy lineup, the company has likely already delivered more than 5,000 models of the electric Fiat 500 since 2013. (The company refuses to release sales figures for the 500e.)

But at lease prices of $199 per month and occasional special offers on top of that, Fiat appears to be moving a number of electric 500s in California. Its closest competitor is the Chevy Spark EV, which has the advantage of five doors, an actual usable rear seat, and even stronger electric acceleration, while still retaining a minicar footprint. The electric Spark will be replaced in 2017 by the upcoming Chevrolet Bolt EV, whose 200-mile range is likely to lead Fiat to offer a new and longer-range battery-powered car soon thereafter.

2 Reviews
5 star
4 star
100%
3 star
2 star
1 star
Rate and Review your car for The Car Connection! Tell us your own ratings for a vehicle you own. Rate your car on Performance, Safety, Features and more.
Write a Review
2016 FIAT 500e 2-Door HB

Fun car to drive. Good value for the lease price. Cold weather reduces the range considerably.
people found this helpful.
Was this review helpful to you? Yes
USED PRICE RANGE
$7,700 - $10,991
Browse Used Listings
in your area
Compare the 2016 FIAT 500e against the competition
Compare All Cars
Looking for a different year of the FIAT 500e?
Read reviews & get prices
Related Used Listings
Browse used listings in your area
See More Used