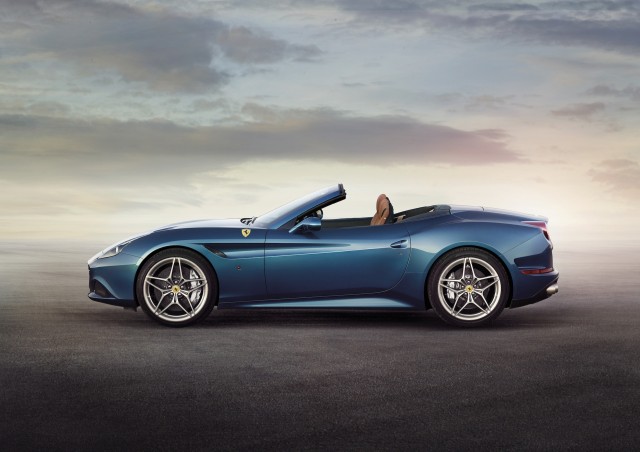 Ferraris live and die by the warm resonance of their V-8 engines; amp it up by ticking the order box for the sport exhaust.

The 2017 Ferrari California T embraces a more luxurious lifestyle, but can peel away the road as well as any $200,000 sportscar should.

There's no such thing as a base car in the world of ultra-luxury exotic cars, but in its $200,000 way, the Ferrari California T is that brand's entry-level machine.

The California T started off life years ago as the California; in 2015 it earned the new suffix with a raft of improvements that bettered its looks and its performance, and added some long-desired electronica to its cabin. The T, of course, stands for the turbocharging applied to its engine.

Of all the Ferraris, the California T is its most user-friendly, the easiest to drive on a daily basis, even if you count the GTC4 Lusso's hatchback and all-wheel drive. The California T seats two to a T, offers a quick-opening hardtop for sunny days and wet ones, and bakes in adjustable ride control that takes the most advantage of its serious performance credentials.

With its 2015 redesign, the California T move more in line with the rest of the current Ferrari lineup. The changes included new headlight units, a subtly restyled lower fascia and grille, and a new hood design that subs in a pair of heat extractors for the previous hood scoop. Fender vent elements were also reshaped alongside, while the doors were reskinned to extend the vents' trailing edges. The rear end is still physically tall, but some subtle resculpting of the trunk's rearmost edge has brought the visual height down a tad. Overall, the exterior recalls classic Ferrari roadster designs, with long, flowing lines and arched fenders.

With the California T name change, it also gained an updated interior, with the same careful mix of leather, metal, and plastic laid out in Ferrari's typically lush, yet purposeful fashion.

The most important change, of course, bolted in a new 3.9-liter twin-turbocharged engine. In the California T, it puts out 553 horsepower and is the first turbocharged powertrain offered by Ferrari since the days of the F40. It's matched to a 7-speed dual-clutch automatic transaxle. The engine's variable boost management system lets it increase torque output with each subsequent transmission gear, maxing out at 557 pound-feet of torque.

The T model should hit 60 mph in about 3.5 seconds compared to the California's 3.8-second time. The more-powerful car also manages to reduce fuel consumption. Ratings by the EPA stand at 16 mpg city, 23 highway, 19 combined.

Handling improved in the California T translation, too. The suspension design has been revised, faster magnetic dampers are fitted, and a new, quicker steering box replaces the old unit, which was no slouch itself. The California T also uses the latest versions of Ferrari's F1-Trac and electronic stability software—and dynamics are said to get better as the new engine is mounted lower, also lowering the center of mass and soothing weight transfer.

As we said while wearing our Motor Authority hats, the latest Ferrari California T changes its demeanor when its steering-wheel control is twisted from Comfort to Sport. "The throttle and shifts wake up, the optional magnetic shocks take a militant stance against body lean. The California steers very crisply, equally at home needling its way through the rocky outcroppings of Highway 74–and it has big carbon-ceramic brakes to haul it down into tight corners, right now, when the stray Huracan or Z06 is taking the next turn a little too slowly."

A Ferrari in performance, the California's a creature of comfort on its own terms. As you should expect by now in the era of globalized automakers, there are some bits and pieces from the Fiat Chrysler empire, but plenty of touches all Ferrari's own, like the manettino, the pushbutton headlights, the turn-signal buttons split for easy thumb operation.

Settle in the low-slung cockpit's elegantly spare front chairs, and you can see how far Ferrari has come from its purist roots. Love it or not, there's an honest-to-god touchscreen in here and it works pretty well for audio functions. Stream Bluetooth, dial in some Beach Boys via the USB port, whatever you want.

As a hardtop convertible, the California T's cabin merges the best of the roadster and coupe worlds, with a well-built, sturdy feel to the interior that hasn't always been typical of Ferrari. Passenger room is good up front, but the plus-two rear seats are best reserved for children or extra gear. There's a new seat design with more bolstering, and while we'll say the trunk is useful for a carefully packed weekend away, it's hardly spacious. The folding hardtop operates smoothly and quickly, opening and closing in about 15 seconds.

No crash-test data exists, of course. The crash-test industry doesn't have the budget or the guts to throw one of these against a wall.

Of course the California T, can be custom tailored to an owner's every wish, with special colors, trims and accessories. You won't end up with the same car as anyone else.

Standard features on the California T include navigation, USB connections, and even something you might not expect from a Ferrari sports car: cupholders. There's some modern tech here, too; Apple CarPlay has arrived, and a new digital gauge system, called Turbo Performance Engineer is located between the two central air vents.