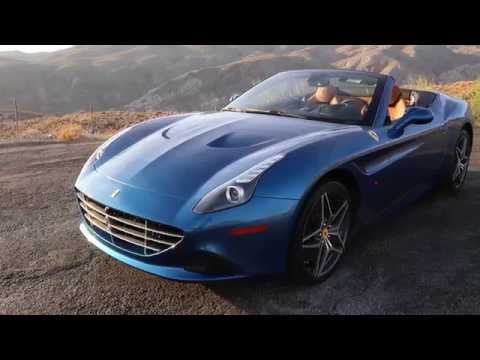 If you want your California T to really sing, be sure to add the Sport Exhaust system, which gives the high-revving V-8 even more vocal range.

With more power and updated styling, the 2015 California T offers even more reasons to dip a toe into Ferrari's exclusive pool.

As the entry point to the current Ferrari range, the California isn't the highest performance offering from the brand, and it's also far from the most beautiful. But a comprehensive round of updates for 2015 brings improved styling, an all-new powertrain, and a new name to go along with them. Because of its new turbocharged V-8 engine, the California has creatively been rechristened California T.

Daily driving and Ferrari cars aren't concepts that are normally considered together, but the California has been designed to be the most approachable and versatile car in the lineup—if you don't consider the FF's all-weather ability a charm. A retractable hardtop provides open-air fun when the sun's out and a quiet refuge when the weather is uncooperative. The magnetorheological dampers provide a switchable personality for the suspension as well, allowing the chassis to be tailored for comfort or performance at the driver's whim.

As the brand's oldest current model, the California's exterior design wasn't quite up to the forms of Ferrari's newer models, but the 2015 update brings it more in line. The front end is highlighted by new headlight units, a subtly restyled lower fascia and grille, and a new hood design that trades the previous scoop for a pair of heat extractors. Along the sides, Ferrari has reshaped the fender vent elements, going so far as to reskin the doors to extend the vents' trailing edges. The rear end is still physically tall, but some subtle resculpting of the bootlid's rearmost edge brings the visual height down a tad. California T models keep the original's long, flowing lines, arched fenders, and curvaceous sides, all of which recall classic Ferrari roadster designs. The California T also receives an updated interior, with the same careful mix of leather, metal, and plastic laid out in Ferrari's typically lush, yet purposeful fashion. The biggest changes inside include a new infotainment setup featuring Apple CarPlay and a new digital gauge system, called Turbo Performance Engineer, that is located between the two central air vents.

The former 490-horsepower, 4.3-liter V-8 has been replaced by a completely new design, which also happens to be the first turbocharged powertrain offered by Ferrari since the days of the F40. The 3.9-liter twin-turbocharged engine puts out 553 hp and is matched once again to a seven-speed dual-clutch automatic transaxle. The engine's variable boost management system lets it increase torque output with each subsequent transmission gear, maxing out at 557 lb-ft of torque. The T model should hit 60 mph in about 3.5 seconds compared to the California's 3.8-second time. The more-powerful car also manages to reduce fuel consumption, with EPA ratings of 16mpg city and 23 highway, compared to 14/19 before when equipped with engine stop-start.

Handling should improve as well. The suspension design has been revised, faster Magnaride dampers are fitted, and a new, quicker steering box replaces the old unit, which was no slouch itself. The California T also uses the latest versions of Ferrari's F1-Trac and electronic stability software. The car keeps its ideal front:rear weight distribution, while the new engine is located lower in the chassis, further enhancing weight transfer and lowering the center of gravity.

As a hardtop convertible, the California T's cabin merges the best of the roadster and coupe worlds, with a well-built, sturdy feel to the interior that hasn't always been typical of Ferrari. Passenger room is good up front, but the plus-two rear seats are best reserved for children or extra gear. The 2015 model also boasts a new seat design that Ferrari says is lighter, more comfortable, and better bolstered. The trunk offers fair space, but isn't quite capacious. The folding hardtop operates smoothly and quickly, opening and closing in about 15 seconds.

Standard features on the California T include navigation, USB connections, and even something you might not expect from a Ferrari sports car: cupholders. For those with a taste for more, the California T, like all other Ferraris, can be custom tailored to an owner's every wish.

2 Reviews
5 star
100%
4 star
3 star
2 star
1 star
Rate and Review your car for The Car Connection! Tell us your own ratings for a vehicle you own. Rate your car on Performance, Safety, Features and more.
Write a Review
2015 Ferrari California 2-Door Convertible

The Car is the finest on the road !

This vehicle has it all as a sports car, convertible, hard top, looks, luxury, performance and reliability.
people found this helpful.
Was this review helpful to you? Yes
2015 Ferrari California 2-Door Convertible

This is an awsome car; I am so glad to own a Ferrari