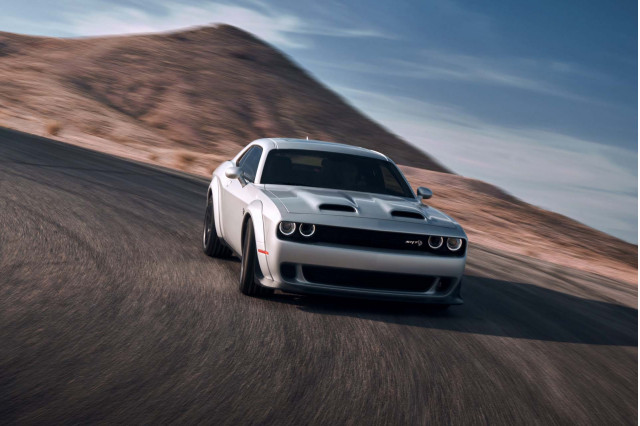 There are numerous options for the 2020 Challenger that make it hugely powerful, but the R/T Scat Pack is a great performance value.

The 2020 Dodge Challenger coupe’s macho looks and speed are a delight—regardless of what’s underneath the hood.

The 2020 Dodge Challenger returns this year with the same idea it’s had for more than a decade now: muscle car profile, two doors, high horsepower.

It’s a 5.8 on our overall scale thanks to its prolific power and good looks that’ve never gone out of style. There’s nothing else like it on the road. (Read more about how we rate cars.)

All Challengers have a classic two-door body with a long hood and wide proportions. The deeply set grille is bookended by round headlights, which is a signature Challenger move in front; the tail’s long and wide lights are a trademark in traffic.

In between and inside, the Challenger is big and comfortable in its advanced age. The interior is shod with durable houndstooth cloth, with big buckets for driver and passenger that are built for wide American bodies. The rear seat is expectedly small in the Challenger, so we say the coupe is best for two.

Under the long hood is a V-6 or V-8, depending on configuration. The base powertrain is a 305-horsepower 3.6-liter V-6 that’s satisfying, but options range from a 5.7-liter V-8 to 6.4- and supercharged 6.2-liter V-8s that range from nearly 400 hp to nearly 800 hp. All-wheel drive is optional on V-6 models, and all engines pair to a 6-speed manual or 8-speed automatic in most configurations.

The Challenger is big and heavy, but also fast. Adaptive dampers on top-shelf models help the coupe navigate corners, but its best life is screaming down straightaways.

The Challenger’s prolific speed has an equally prolific thirst. The thriftiest coupes manage 23 mpg combined, while SRT Hellcats rate in the teens for fuel economy, according to the EPA.

We wish we could age as well as the 2020 Challenger.

Its performance is ahead of its time, but the 2020 Challenger’s looks are all yesteryears. The coupe is a throwback to 1970s—minus the bellbottoms.

We give it an 8 for a good interior and an exterior that’s better than good, it’s great. (Read more about how we rate cars.)

The big Dodge coupe oozes cool, with muscle car looks that don’t age. Despite the coupe’s relative age among new cars, it’s still a looker. The Challenger’s wide, deeply set grille and headlights are direct throwbacks, and its wide haunches hint at performance that the Challenger delivers in every configuration. An available Widebody version is more macho still, and on top of looking cooler, the wider tires are even more helpful.

The Challenger is highly customizable with wheels, graphics, colors, and performance packages—most of the V-8 models have hood scoops and shakers that we think will never go out of style.

Inside, the Challenger has a driver-focused cockpit with a dashboard that cants toward seat No. 1—grab the keys often.

A 7.0-inch touchscreen is standard, but most models will get an 8.4-inch version that dominates the center console. Houndstooth cloth is standard on all models, a not-so-subtle nod to the coupe’s heritage from nearly 40 years ago.

Big, brash, and built for the dragstrip, the 2020 Challenger is exciting in any configuration.

We arrived at peak horsepower in cars like the 2020 Dodge Challenger.

With up to 797 horsepower available, the coupe rivals cars that cost 3 to 30 times more.

It’s an 8 for performance because although its power is prolific, so is its weight. Or, more simply: The 2020 Challenger goes gangbusters in a straight line. (Read more about how we rate cars.)

The Challenger would flex an Excel spreadsheet in raw data, so here’s the short of the long.

Dodge starts with a 3.6-liter V-6 in the Challenger SXT and Challenger GT versions, and they most often make 305 hp and 268 lb-ft. Sent through an 8-speed automatic transmission, the SXT and GT versions power the rear or optionally all four wheels. It’s enough power to satisfy most buyers, but also just enough to whet appetites for a V-8, too.

The Challenger’s V-8 menu starts with a 5.7-liter available in R/Ts that makes 375 hp and 410 lb-ft. That power is sent through a 6-speed manual or optional 8-speed automatic toward the rear wheels only. There’s enough satisfying twist, but the R/T’s best trick is its deep burble.

Not satisfied? You’re covered. The Challenger SRT Hellcat straps a supercharger on top of a 6.2-liter V-8 for 717 hp and 0-60 mph run in 3.5 seconds. It’s available with an 8-speed automatic or a 6-speed manual, and here’s your straightjacket.

If you need to shave the last tenth off that 0-60-mph time, you’ll have to pay more. The Hellcat Redeye makes 797 hp from its 6.2-liter supercharged V-8, but only gets an 8-speed automatic. It’s ferocious and can make the quarter-mile dash a sub-11-second blur for more than $70,000 to start. Approach carefully and keep your hands and arms close.

The Challenger weighs as much as some minivans, but it uses clever tuning and adaptive dampers on some models to adequately handle corners. It doesn’t cope as well as competitors such as the Camaro and Mustang, but the Challenger hustles hard down every inch of pavement.

The R/T Scat Pack is a great compromise between everyday drivability and track prowess, although it can’t outrun its physical dimensions—it’s big and heavy and feels like both sometimes.

The Widebody versions of the Challenger are the most confident, thanks to 2.5 added inches of width and beefier tires.

Mash the throttle too soon and the Challenger loves to step out of shape. Overcook it and the back end will swap with the front end faster than you can say “What’s oversteer?”

We’d advise a track day with any Challenger, but especially the SRT versions.

Palatial front seats are offset by cramped rear seats in the 2020 Challenger.

The first row is the place to be in the 2020 Challenger—preferably the driver’s seat.

We give the Challenger points above average for its comfy front thrones, but we take one back for cramped rear confines. The trunk is cavernous, proving 700-plus horsepower can also be practical. It’s a 5. (Read more about how we rate cars.)

The Challenger shares its bones with the Charger sedan, so good space for passengers is baked into the coupe’s formula. The front seats are spacious and thickly padded—it’s easily one of the most comfortable cars to drive for long distances for big bodies. Smaller folks might slide around a little during spirited drives; consider it a call for more cheeseburgers.

The rear seats? Not the same. They trade practicality for the coupe’s muscle-car looks. They’re hard for adults to climb into and cramped for space. Once aboard, the space is dark and won’t be suitable for adults on the regular; the seats are best used for children occasionally.

The Challenger’s 16.2 cubic feet of cargo space is large for nearly any sedan or coupe, and it’ll swallow just about anything short of big bikes or bulky gear. The liftover height is taller and the opening is a little smaller than we’d like.

Despite a dark interior, the Challenger’s fit and finish is uptown all the way. Most surfaces are soft-touch, and although all the standard interiors are cloth, we like the durable-feeling houndstooth upholstery that feels and looks superb. Spend-up materials are even better.

Time has caught up, and passed by, the 2020 Dodge Challenger’s safety options.

Although federal and independent testers give it good—but not great—crash-test scores, the Challenger lacks active safety features to score well on our scale.

Federal testers give the Challenger a five-star overall rating, including four stars for front- and rollover-crash safety.

The IIHS has fewer good things to say. The agency hasn’t comprehensively tested the coupe, but gave the 2019 Challenger a “Marginal” rating for small-overlap front crash safety and gave it “Acceptable” ratings for rollover and head restraints.

The optional forward collision warning system was rated as “Basic” but won’t stop the Challenger from crashing.

The short of the long? Without newer safety systems and a structure, the looks of the Challenger aren’t the only thing that’s retro.

New Dodge Challenger for sale near

There’s a 2020 Challenger for nearly every taste, but they’re all spicy.

Equally as breathtaking as the 2020 Challenger’s performance is its massive breadth and depth for customization, packages, and yes, performance.

The coupe is aged as far as new cars go, so it lacks the necessary hardware for some of the latest and greatest. We don’t mind, speed never goes out of style.

Starting from an average score, we give the Challenger points above average for its long options list and its infotainment system. The Dodge narrowly misses another because it doesn’t include automatic emergency braking on any car, for any price. It’s a 7. (Read more about how we rate cars.)

Base Challenger coupes are a performance bargain. For less than $30,000 to start, they include cloth upholstery, power-adjustable front seats, dual-zone climate control, a 7.0-inch touchscreen for infotainment with Apple CarPlay and Android Auto compatibility, a leather-wrapped steering wheel, and ride on 18-inch alloy wheels. It’s all the look of the Challenger coupe without the prolific thirst and reasonable performance.

We admit many buyers won’t stop there—temptation is too much. The R/T Scat Pack is a performance juggernaut hiding in the middle of the Challenger lineup. It pairs a 6.4-liter naturally aspirated V-8 that makes 485 hp with uprated brakes, 20-inch wheels, better engine cooling, line lock and launch control, high performance suspension, SRT drive modes, an 8.4-inch touchscreen for infotainment, and a bee on the badge for about $40,000. Operators are standing by to take money.

Hellcats aren’t cheap, but they’re a fitting tribute to the temple of horsepower while they’re around. More than 700 hp is entertaining enough, but add beefier performance bits, adaptive dampers, and a flat bottom steering wheel for more than $70,000, which tempts our wallets and our available points on our driver’s licenses.

The 2020 Challenger isn’t efficient. No one thought it would be.

Muscle cars run usually away from fuel efficiency faster than they leave the line. The 2020 Dodge Challenger doesn’t change that.

There’s a glint of hope: V-6-equipped Challengers are relatively frugal—emphasis on relative.

Our rating is based on the V-8-equipped coupes, which is what most people are here for anyway. This year’s EPA numbers aren’t set, but we don’t expect they’ll stray far from last year’s figures.

If efficiency is the goal, we think you may have missed the point. The V-6-equipped SXT and GT coupes with rear-wheel drive are the most frugal and rate 19/30/23 mpg, adding all-wheel drive drops that to 18/27/21 mpg.

The rest of the Challenger’s V-8 lineup will pass just about everything else on the road, except gas stations.

Challenger SRT Hellcat and SRT Hellcat Redeyes rate identically at 13/21/16 mpg with a manual or 13/22/16 mpg with an automatic teamed to a supercharged 6.2-liter V-8 that churns 717 or 797 hp. Those ratings aren’t bad, but also probably not reality for many drivers. Tapping into so much horsepower can sink real-world economy in the low-teens—possibly lower.

Be the first one to write a review on 2020 Dodge Challenger
Rate and Review your car for The Car Connection! Tell us your own ratings for a vehicle you own. Rate your car on Performance, Safety, Features and more.
Write a Review
$27,995
MSRP based on SXT RWD
Change Style

Drivetrain
Trim
Other
See Your Price
5.8
Overall
Expert Rating
Rating breakdown on a scale of 1 to 10?
Compare the 2020 Dodge Challenger against the competition
Compare All Cars
Looking for a different year of the Dodge Challenger?
Read reviews & get prices
Related Used Listings
Browse used listings in your area
See More Used