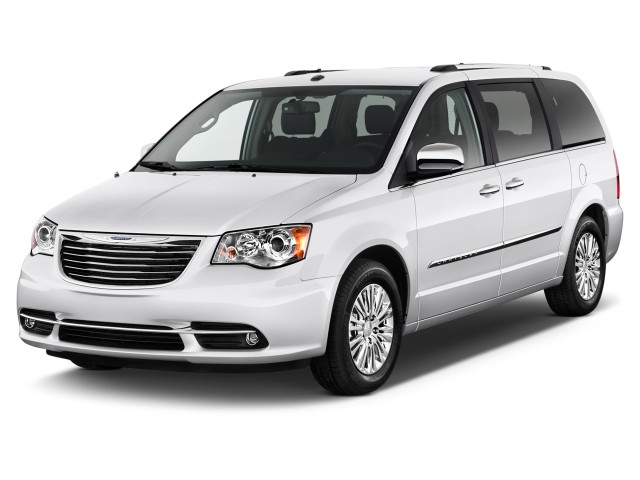 For a less expensive take on the Chrysler Town & Country, look no further than the Dodge Grand Caravan, which offers almost all the same features in option packages.

The Chrysler Town & Country is a more expensive, more plush Caravan--and a great choice for shoppers looking for the best flexibility and features in minivans.

The Chrysler Town & Country is one of the best minivans you can buy; but it doesn't make perfect sense quite like its near-twin over at Chrysler's Dodge division. It's a luxury minivan, which runs counter our idea of how minivans should be used. To us, a minivan needs to be able to go from four 10-year-olds to four Costco cartloads in nothing flat; the Town & Country can do it, but its leather seats and $30,000-plus features might never look the same.

The Town & Country is the companion piece to the Dodge Grand Caravan. (For more information on that top minivan pick, see TheCarConnection's 2014 Dodge Grand Caravan page.) In the current plan, the Town & Country is the premium offering--so while the Dodge van has a special edition priced below $20,000, the Chrysler minivan starts at about $30,000, in the search for the same upscale buyers that regularly put their money down on the competitive Toyota Sienna and Honda Odyssey family haulers.

Redesigned in 2011 along with the Dodge, the Town & Country gets its own grille and interior, but shares its V-6 drivetrain, steering, suspension, brakes, and safety cell with the Grand Caravan. Some Caravan options are standard on the Chrysler--must-haves like Bluetooth, a rearview camera, and Stow 'N Go seating, which puts both minivans on a flexibility pedestal in the segment. Stow 'N Go means the two rearmost rows of seats can be folded into the floor, turning the Town & Country into a tall package van in a matter of seconds.

Review continues below
There's not so much visual space between the Dodge and Chrysler vans from the sides or rear, but in front, the Town & Country makes its pitch for discerning buyers with a winged logo and a discreet grille. It's still a square-jawed, upright vehicle, but the slightly softer look plays well. The Town & Country also has LED taillamps to distinguish it from the Grand Caravan. The cabin has more striking differences from its companion models: the instruments are ringed in chrome, and so are the major controls, and the overwhelming plasticky touches of the pre-2011 minivan have been completely excised. It's a rich look, punctuated by the analog clock that's meant to ape the shape of the grille.

The Town & Country's drivetrain mirrors the one in the Grand Caravan. It's a 283-horsepower V-6, coupled to a six-speed automatic and front-wheel drive. (Among minivans, only the Toyota Sienna still offers all-wheel drive). The powertrain is fine for toting a full family around from mall to mall, and the steering responds a bit more quickly than before. Ride and handling are oriented around safety and security: it's softly tuned, and the suspension bounds more than the fairly responsive Odyssey and Sienna. The V-6 delivers good acceleration, but gas mileage remains near the top of the segment.

The Town & Country is offered in Touring, Touring-L and Limited trims. Most of the features offered as options on the Dodge are standard on the Chrysler, including power windows for front and side doors; power locks and mirrors; power side doors, tailgate and pedals; automatic headlights; garage door opener; a 115-volt outlet; Stow 'N Go; leather seats; and a power driver seat. Bluetooth and a USB port are standard. A safety option package includes parking sensors, rearview camera, and blind-spot monitors. Options include a sunroof; a navigation system; in-car wireless internet; a DVD entertainment system; and pushbutton start. There's also a Blu-Ray DVD entertainment system with an HDMI input and twin USB ports for gaming and charging.

Both Chrysler minivans have earned a four-star rating from the NHTSA.

4 Reviews
5 star
25%
4 star
75%
3 star
2 star
1 star
Rate and Review your car for The Car Connection! Tell us your own ratings for a vehicle you own. Rate your car on Performance, Safety, Features and more.
Write a Review
2014 Chrysler Town & Country 4-Door Wagon Touring

I have a 2014 Town and Country with 48k miles which the check engine light came on and it ended up being a bad cylinder head. The motor which they CLAIM to have fixed the issue! They denied by warranty claim because I didn't use Dodge or Chrysler to change my oil. I used Jiffy Lube and MWR Army oil Changing facilities. Total BS since the issues is cooling related due to bad head design. Do yourself a BIG FAVOR. Get the Honda or Toyota minivan and save yourself the headache and hit to the wallet. + More »
people found this helpful.
Was this review helpful to you? Yes
For 2014 Chrysler Town & Country

Love this van. Best Luxury car we ever owned.

Great van, easy to drive. Great for the Grandkids.

Does all we expect of it and then some. Comfortable, easy to drive. Easy to make more room by folding seats. Stable on the road. Reliable Plenty of power.
people found this helpful.
Was this review helpful to you? Yes
USED PRICE RANGE
$6,990 - $18,995
Browse Used Listings
in your area
8.4
Overall
Expert Rating
Rating breakdown on a scale of 1 to 10?
Compare the 2014 Chrysler Town & Country against the competition
Compare All Cars
Looking for a different year of the Chrysler Town & Country?
Read reviews & get prices
Related Used Listings
Browse used listings in your area
See More Used