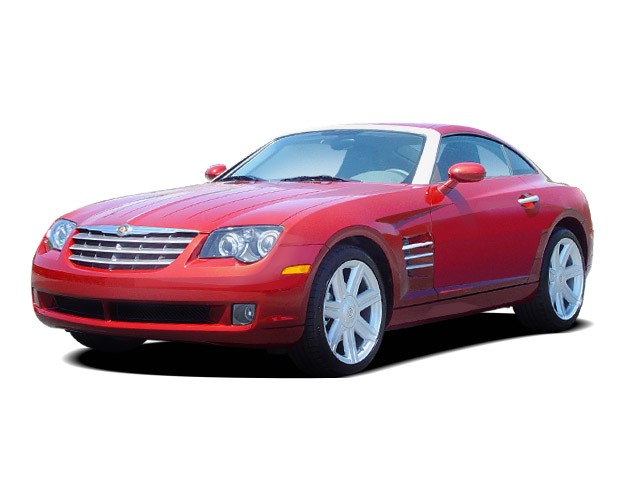 The 2008 Chrysler Crossfire is a sexy roadster with gobs of power, a tight cockpit, and a style all its own.

The 2008 Chrysler Crossfire coupe and roadster are the last of their breed: A rebodied version of the last-generation Mercedes-Benz SLK, the Crossfire has already been dumped from the Chrysler lineup due to slow sales.

Even before the decision was made to drop the Crossfire, Chrysler had paid little attention to the basic two-door coupe and convertible. Last year, it received knee airbags but no other updates. Then again, the basic idea needed little in the way of dramatic change; the Crossfire drew its power from a strong 215-horsepower V-6 and sent it to the rear wheels through a compact, notchy-feeling six-speed manual gearbox or a smoother five-speed automatic. The 330-horsepower SRT6 version is a distant memory.

The draw with the Crossfire has always been its muscular exterior styling, complemented by a twin-cockpit interior, finished in metallic accents, and dolled up with amenities like dual-zone air conditioning and power locks, windows, and mirrors. All-speed traction control and stability control are standard on 2008 models, as are dual front and side airbags.

Underpinning the Deco-fantastic shape are massive brakes, a racy double-wishbone independent suspension, and unfortunately, a slow-responding steering rack. The Chrysler Crossfire might not have super-car power, but its ride is relatively good, even if it feels a step slower than competitors.

The few remaining additional options include a navigation system and two-tone, heated, leather, power seats. Tire pressure monitors are now standard, and the Crossfire earns five-star passenger side-impact ratings and five-star rollover protection for both the coupe and convertible models.

The 2008 Chrysler Crossfire still draws attention with its retro-flavored lines.

The 2008 Chrysler Crossfire coupe and roadster are the last of their breed: A rebodied version of the last-generation Mercedes-Benz SLK, the Crossfire has already been dumped from the Chrysler lineup due to slow sales.

The draw with the Crossfire has always been its muscular exterior styling, complemented by a twin-cockpit interior, finished in metallic accents. Cars.com says “the Crossfire's styling is a blend of edges and subtle curves. A center spine runs the full length of the coupe and serves as a dominant design feature. A tapered boat-tail shape highlights the rear end, which emphasizes the large rear wheels, tires and fender,” while Auto Spectator praises the 2008 Chrysler's "distinctive side view" and "poised stance." Jalopnik declares the Chrysler Crossfire "flashy enough for even the most jaded Hollywood types." Edmunds deems it “quasi-nautical” and points out “there's still nothing else on the road that looks like the Crossfire.” Kelley Blue Book loves the "great styling” and feels the Crossfire “will no doubt be a future collectible." The roadster and coupe are nearly identical, with the convertible top and short trunk lid keeping the coupe’s look nearly intact on the open-air version.

The distinctive exterior doesn’t really hide the fact that the Crossfire is a teensy two-seater, albeit one with a fancy, aluminum-trimmed interior. Cars.com says “only two occupants fit inside the Crossfire's twin-cockpit interior. A metallic center console flows from the top of the instrument panel through the center of the car.” Motor Trend notes "the steering wheel is a rich-looking piece with accents of aluminum echoed in the column's stalks." Edmunds adds that “the Crossfire's interior is pleasing enough to the eye, what with its two-tone color scheme and abundant metallic trim.” Automobile observes, “The switch-gear works flawlessly, the surfaces are attractive, and the silver trim brightens things up.”

The 2008 Chrysler Crossfire has sportscar grip, but ultimate power and feel aren’t up to the mod look.

The 2008 Chrysler Crossfire doesn’t quite have the performance to match its quasi-exotic looks.

The sole engine available in its last year on the market is a 3.2-liter six-cylinder with 215 horsepower and 229 pound-feet of torque. The 330-hp SRT6 version from years past has been dropped already. Automobile says of the engine, “Peak torque comes on stream at 3000 rpm, which helps make the Crossfire sports car quick at low speeds. But open it up on the highway, and the rush doesn't continue with the same urgency.” Edmunds reports “the Crossfire is capable of going from zero to 60 in the high 6-second range when equipped with the manual transmission; figure a few 10ths more for the five-speed auto.”

Neither transmission wins much favor with reviewers. “Either a six-speed manual gearbox or an adaptive AutoStick five-speed automatic transmission can be installed,” Cars.com reports. ConsumerGuide finds the automatic’s responses lacking: "quick passing response requires a pronounced stab at the throttle to coax a down shift from the otherwise smooth-working transmission." Automobile notes the automatic “can be manually up- and downshifted without first moving the selector out of drive. We would like to see steering-wheel-mounted shift paddles, however.” Edmunds observes “the six-speed manual doesn't like to be rushed,” and Automobile points out the “stubby shift lever promises short, slick shifts, but…doesn't really deliver.”

ConsumerGuide Automotive determines the fuel efficiency of the 2008 Chrysler Crossfire to be 21 mpg for the automatic transmission. “EPA fuel economy estimates are 15 mpg city/23 highway for manual-equipped Crossfires, and 19/25 for models with the automatic,” Edmunds says.

ConsumerGuide notes the Crossfire’s "well-weighted steering provides good feedback and crisp turn-in." Automobile states, “The Crossfire turns in sharply and corners flat” and “the ultrawide tires provide so much grip (even the all-season Continentals), that, even with the stability control switched off, it's hard to find their limit,” but says the Crossfire’s steering “can’t hope to match the feel of the best sports cars.” Edmunds considers the 2008 Chrysler Crossfire "steering feel and response [to be] poor." Overall, they feel, “aside from its tenacious grip and decently comfortable highway ride, the Crossfire doesn't have much to offer when compared to the newer, dynamically superior models available at its price point.” Like many sportscars reviewed by enthusiast magazines and even large consumer Web sites, the Crossfire got more positive reviews when it first went on sale, and opinions became less favorable as it aged.

The 2008 Chrysler Crossfire is a tight squeeze for adults and their stuff—and the metallic trim inside is just a brilliant disguise.

Though the cabin has a decidedly sporty and somewhat cramped feel, the ride is more akin to that of a sedan. ConsumerGuide calls the 2008 Chrysler offering "among the most-comfortable two-seat sports cars" on the market today. Cars.com points out “Only two occupants fit inside the Crossfire's twin-cockpit interior,” and Kelley Blue Book observes in the coupe, "a rear bulkhead prevents the seats from reclining when they are fully retracted"; they also consider the cockpit to be "cramped,” as does Edmunds. “You're cocooned inside, with a high beltline rising toward the rear, a sloping roof, and a pinched view out the back,” Automobile reports. “The center console is fairly large, but the cabin is wide enough not to feel confining. Tall drivers who need to push the seat far back may find the headliner too close, however.”

“As for cargo space, it's at a premium,” Edmunds reports, “not surprising given the Crossfire's intimate two-seat layout.” Automobile adds, “A high bulkhead immediately aft of the front seats precludes tossing anything behind them, and there's only 7.6 cubic feet of cargo space under the rear hatch.”

“To Chrysler's credit, though, the Crossfire's interior is pleasing enough to the eye, what with its two-tone color scheme and abundant metallic trim,” Edmunds says. “However, that trim is really just silver-painted plastic for the most part, and there's no dressing-up that old Mercedes stereo's undersized buttons and mediocre sound quality.” ConsumerGuide feels the interior use of silver plastic is an "inexcusable move given this car's price." Automobile comments, “The switch-gear works flawlessly, the surfaces are attractive, and the silver trim brightens things up,” though.

ConsumerGuide notes "fairly high wind noise above 65 mph" and "more so in the convertible."

Packed with Mercedes-derived safety features, the 2008 Chrysler Crossfire hasn’t been subjected to most crash tests.

The 2008 Chrysler Crossfire hasn’t been tested completely by reputable sources, but it does offer a good array of safety equipment.

Edmunds notes a bevy of 2008 Crossfire standards, including "brake assist, traction control and stability control." Cars.com reports that the Chrysler Crossfire also "enters 2008 with a tire pressure monitoring system as standard equipment." ConsumerGuide points out that a spare tire is not included, though: "A plug-in air compressor and a can of tire sealant are provided instead."

Visibility is an issue in Crossfire coupes, due to “gigantic blind spots that come along with the Crossfire's 'boattail' rear styling,” Edmunds observes.

Used Chrysler Crossfire for sale near

The base 2008 Chrysler Crossfire is nearly completely equipped, but lacks some entertainment and communications features.

In the last year of its life, the Chrysler Crossfire has seen its model range chopped to a single trim level—Limited—though the choice of coupe or convertible still is offered.

“Only the Limited trim level is offered for 2008, as the base models have been dropped,” Edmunds reports, and it comes “standard with 18-inch wheels in front and 19s out back, dual-zone manual air-conditioning, an eight-speaker, 240-watt stereo system, power-adjustable leather seats with heaters, leather-wrapped steering wheel, full power accessories.”

Crossfire options for 2008 include the five-speed automatic transmission with Auto Stick and heated seats. A navigation system is offered, but neither Bluetooth nor iPod connectivity is on the menu.

The Crossfire is out of production as of this writing, so while shopping for one, you should be able to realize substantial discounts from the sticker price.

Be the first one to write a review on 2008 Chrysler Crossfire
Rate and Review your car for The Car Connection! Tell us your own ratings for a vehicle you own. Rate your car on Performance, Safety, Features and more.
Write a Review
Browse Used Listings
in your area
7.6
Overall
Expert Rating
Rating breakdown on a scale of 1 to 10?
Compare the 2008 Chrysler Crossfire against the competition
Looking for a different year of the Chrysler Crossfire?
Read reviews & get prices