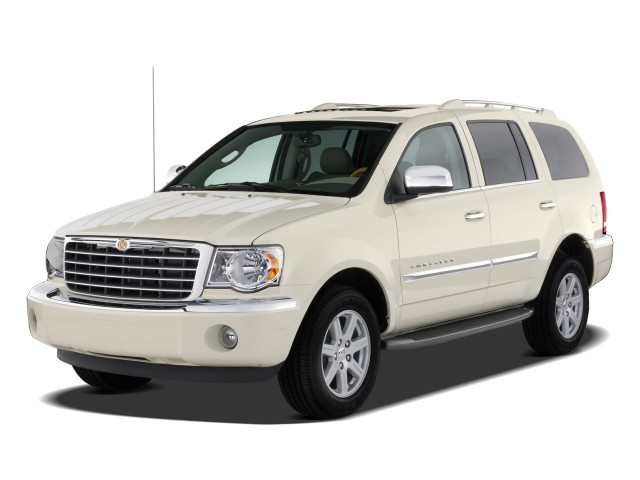 The Dodge Durango is mechanically the same as the 2008 Chrysler Aspen, but is available in more sparsely equipped models at a much lower price.

There are few compelling reasons to choose the 2008 Chrysler Aspen over slightly larger, roomier competitors like a well-equipped Ford Expedition or GMC Yukon.

The 2008 Chrysler Aspen is a full-size sport-utility vehicle based on the Dodge Durango, offering three-row seating and seven-passenger capability, with both rear- and all-wheel-drive variants available.

The Aspen's truck-based underpinnings--including a solid hydroformed frame--make it an especially good choice for towing; 4x4 models include a special tow/haul mode for the five-speed automatic transmission, and Trailer Sway Control helps maintain stability while towing. The 2008 Chrysler Aspen has a maximum tow rating of 8,950 pounds when properly equipped.

A new 303-horsepower, 4.7-liter V-8 with E85 and flex-fuel capability is standard on the 2008 Chrysler Aspen, but a buff 345-horsepower, 5.7-liter HEMI V-8 engine is optional. The HEMI incorporates Chrysler's Multi-Displacement System (MDS), which helps reduce its thirst to the same rate as the other V-8.

Either engine gives the 2008 Chrysler Aspen more than adequate power for most needs, but once you're moving, you'll feel the Aspen's hefty weight in the way it brakes (with a lot of nosedive) and handles. Like other truck-based SUVs, the Aspen lacks an independent rear suspension; that said, its ride is quite soft but somewhat bouncy on all but the smoothest roads, and it generally steers well, considering the nearly 5,000-pound curb weight. But on rougher curvy roads, you'll need to slow down.

The Aspen's controls and displays are attractive and well designed, materials look quite cheerful (as long as you don't mind wood grain trim), and front-seat passengers get comfortable, supportive seats. Three rows of seats have room for up to eight in a pinch in the 2008 Chrysler Aspen, though those in the third row will be pinched, unless they're children. There are 68.4 cubic feet of luggage space with the third row folded.

Only one trim level is available in the 2008 Chrysler Aspen, the Limited, and standard equipment includes a new 303-horsepower, 4.7-liter V-8 with E85/flex-fuel capability, 18-inch wheels, leather trim, and air conditioning. The standard audio system is now an AM/FM/CD player with an auxiliary jack.

All-row side curtain airbags, front side airbags, and electronic stability control are standard on the Aspen. The 2008 Chrysler Aspen earned a top five-star rating from the federal government in frontal impact, but wasn't tested in side impact, nor was it tested by the IIHS. The feds flagged it with their lowest three-star rating in rollover because of its high center of mass.

Chrysler aficionados will appreciate the 2008 Chrysler Aspen's familiar styling, while others will view it as an upgraded Durango.

Most reviewers agree that the 2008 Chrysler Aspen is indeed more stylish and boasts more creature comforts than its counterpart, the Dodge Durango--but it runs up against some tough competition, and in many ways falls short in the styling department.

"Chrysler designed it to appeal to consumers interested in premium features and an upscale appearance," Edmunds notes, and "in most respects, the Aspen delivers." Cars.com says this 2008 Chrysler SUV "is an upscale version of Dodge's Durango," and thus competes with the GMC Yukon and Ford Expedition. According to Kelley Blue Book, "the face comes off as conservative -- which isn't necessarily a bad thing." Most truck-based SUVs in its class appear "boxy," but buyers can opt to boost this 2008 Chrysler's curb appeal by adding 20-inch, 10-spoke wheels and running boards. "The Aspen carries distinctive Chrysler styling cues," reports ForbesAutos, which also notes that the Aspen "has a large chrome grille up front, like the Chrysler 300 sedan, and a sculpted hood, like the Chrysler Crossfire roadster."

Most reviewers agree with TheCarConnection.com that inside the cabin is where the 2008 Chrysler Aspen shines. "Similar to the Durango's, the Aspen's dashboard gains plenty of wood-like trim...cloth upholstery can be upgraded to two-tone leather or a leather and suede combination," reveals Cars.com. According to ForbesAutos, "The Chrysler Aspen's spacious cabin strives to be luxurious with faux, light-colored wood trim, LED lighting, white-faced instrumentation." Car and Driver reports that "visual flair comes from two-tone leather treatments on the steering wheel and seats."

The 2008 Chrysler Aspen is thirsty and not overly quick, but provides a quality ride, with handling on par for the segment.

The 2008 Chrysler Aspen has HEMI power but not thrilling acceleration, though towing capacity and ride quality are strong suits.

"Backing both engines is a five-speed automatic transmission delivering power via 2WD or 4WD," reports Edmunds. This 2008 Chrysler transmission was criticized by several consumer car sites consulted by TheCarConnection.com because it doesn't have a manual selection above second gear, causing a great deal of gear hunting on steep hills and requiring excessive braking on downgrades. "Rear-wheel drive is standard, and two four-wheel-drive systems are available," according to Cars.com; of the latter, one is designed for travel on pavement, while the other is more appropriate for off-road use.

"The bigger engine comes with Chrysler's Multi-Displacement System that deactivates half the cylinders under low to moderate throttle," details ForbesAutos; "that helps the Hemi achieve slightly better fuel economy than the less powerful standard engine." EPA estimates for this 2008 Chrysler are 13 mpg city/18 mpg highway for a 4WD 5.7-liter V-8-equipped model. The 4.7-liter engine is also flex-fuel capable.

Edmunds reports that the Aspen’s "ride is smooth and handling is quite respectable for an SUV weighing 2.5 tons." Kelley Blue Book agrees that the 2008 Chrysler Aspen has a well-cushioned ride that's fit for long road trips and goes on to say "too big to be agile, the Aspen nonetheless handles with sure stability, and that includes during towing." Edmunds does, however, find some fault with steering and braking, saying the former "can feel a bit loose and the brake pedal feels vague, with lengthy stopping distances." ConsumerGuide attests that "Aspen has good grip and modest lean in corners--impressive for a vehicle this large and heavy," but adds that "steering...would benefit from less power assist and more road feel." Car and Driver proclaims they "left relatively impressed with the Aspen's 'round-town demeanor; the ride quality being nowhere near as brittle as we expected, given the rugged suspension architecture and big wheels."

The 2008 Chrysler Aspen is comfortable, and the quality is a step above the Durango.

Most reviewers agree that the 2008 Chrysler Aspen's first two rows are comfortable and offer decent legroom, but the third row is notably cramped.

"The Aspen seats seven occupants in three rows, although an available third-row bench seat bumps capacity to eight," says Cars.com. While most reviews read by TheCarConnection.com report that the front seats of this 2008 Chrysler have more than ample legroom, passengers riding in the second and third rows don't have it as good. ConsumerGuide acknowledges that at best, the "3rd row...can accommodate adults for short trips." Kelley Blue Book disagrees, saying that the "Aspen doesn't have a bad seat in the house. If your passengers complain, it will be about your driving, not their accommodations." Edmunds appreciates the fact that "moving about the [this 2008 Chrysler] cabin doesn't demand the nimbleness of a gymnast," but even with captain's chairs for the second row, "the seats are fixed in place so legroom's still tight."

Edmunds reports that Aspen Chrysler's "maximum cargo capacity is impressive at over 102 cubic feet with all rear seats folded." According to Cars.com, this is "a bit less than the Ford Expedition and Chevy Tahoe, which both have around 110 cubic feet." ConsumerGuide notes "that the automatic liftgate lacks a tailgate button for power close," but also details "plenty of in-cabin storage, including a deep center console and large, useful console tray."

Edmunds points out that "ergonomics...are first-rate," but although "quality of materials is a bit improved over the Dodge," it "still lags behind the class leaders." This view is shared by ConsumerGuide, which praises the 2008 Chrysler Aspen's cabin materials for being "notably upmarket" when compared to the Dodge Durango, but adds that it "trails those of premium rivals from Acura and Cadillac." Nonetheless, 2008 Chrysler "LED lighting, white-faced instrumentation, and an analog clock atop the dashboard's center stack" lend a touch of luxury, reports ForbesAutos, and there's even a health benefit: "standard cloth seats are covered in a dirt-repellent and anti-microbial textile."

ConsumerGuide contends that "road noise is decently muted, but certain surfaces can induce audible tire roar," while "highway-speed wind rush is evident from the outside mirrors."

The 2008 Chrysler Aspen has yet to be thoroughly crash-tested, but it has many safety features to protect you and your family.

The 2008 Chrysler Aspen offers some excellent standard safety features, but top-heaviness and missing crash data means it gets a lower score from TheCarConnection.com.

Where the 2008 Chrysler Aspen falls short is in terms of rollover protection; although the 4WD version of this 2008 Chrysler gets four stars in NHTSA rollover tests, the 2WD model only rated three. The vehicle does get five stars for front-impact protection, but there are no government side impact crash-test results for the Aspen. The Insurance Institute for Highway Safety (IIHS) has not tested the Aspen 2008 at all as of this writing.

ConsumerGuide is the only source normally consulted by our experts that consistently reports on visibility issues: their test drivers note that "thick front roof pillars obstruct view around corners," but overall, the Aspen offers "good rear visibility, aided by large outside mirrors."

Used Chrysler Aspen for sale near

The 2008 Chrysler Aspen has more standard features than the Durango, along with high-tech entertainment options.

The 2008 Chrysler Aspen is loaded with many creature comforts even in base trim.

The optional 2008 Chrysler navigation system and a plethora of audio and entertainment options will keep you on track and make you feel at home during the morning commute or on cross-country adventures. Mother Proof says "the rear seat entertainment system is pretty robust," but notes that the "remote control is cleverly hidden in the overhead console and can be removed, which makes it much easier for the kids to lose."

Car and Driver remarks, "Aspen SUV buyers who opt for the Signature package get toys including a power sunroof, the MyGIG MP3 entertainment system with SIRIUS satellite radio, and a rear camera." This 2008 Chrysler Signature package also includes an electronic shift-on-the-fly transfer case (4WD models only) and heated front seats with leather trim.

1 Review
5 star
100%
4 star
3 star
2 star
1 star
Rate and Review your car for The Car Connection! Tell us your own ratings for a vehicle you own. Rate your car on Performance, Safety, Features and more.
Write a Review
2008 Chrysler Aspen AWD 4-Door Limited

This is the best SUV