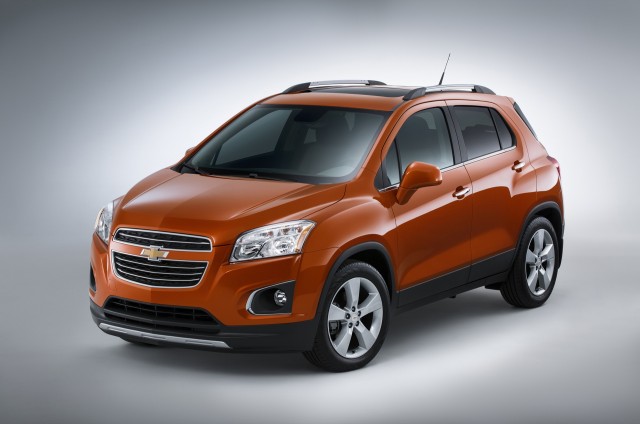 All-wheel drive is a $1,500 option on all models, and that brings the security of four driven wheels to a very reasonable base price.

With its useful hatchback shape and thrifty fuel economy, the 2016 Chevrolet Trax is a smart package for city dwellers who value practicality over power or style.

The 2016 Chevrolet Trax is GM's smallest crossover and platform-mate to the Buick Encore. Although both Encore and Trax are based on the Chevrolet Sonic's architecture, the Encore is decidedly more upscale.

Chevrolet's newest crossover blends the utility of the brand's larger Equinox with tall, subcompact dimensions to create the least-expensive all-wheel-drive entry in Chevrolet's model lineup. The Trax fits four adults comfortably or five in a pinch with three passengers shoulder-to-shoulder in the rear seat. Cargo capacity is rated at 18.7 cubic feet. Folding down the 60/40 split-fold rear seat opens the cabin up for 48.4 cubic feet of cargo room. The front passenger seat also folds for those rare lumber runs.

In the U.S. market, both front- and all-wheel-drive Chevrolet Trax models are fitted with a 138-horsepower 1.4-liter turbocharged inline-4 teamed with six-speed automatic transmissions. The small-displacement turbo engine returns decent fuel economy, but doesn't fare well against newer competition. The best fuel economy is achieved by front-wheel-drive models, which carry ratings of 26 mpg city, 34 highway, 29 combined, according to the EPA. By comparison, the HR-V and CX-3 are rated at 31 mpg combined. Trax models with AWD are rated at 24/31/27 mpg.

It took a while for the Trax to arrive inthe U.S. as Chevrolet worked to improve its crash structure. That paid off as the subcompact utility scores well in crash tests. The list of standard safety features is impressive as well, with a rearview camera, electronic stability control with rollover mitigation, and 10 airbags as standard.

A subcompact crossover, the 2016 Chevy incorporates cues from Chevy's crossovers in a tall, hatchback-style body. The overall effect, however, is rather generic.

The subcompact Sonic provides its underpinnings for both of GM's new crop of subcompact utilities: the Chevrolet Trax and Buick Encore. And while the Trax and Encore only share front doors with each other, the Buick's is more visually flamboyant. With the Chevy offering, designers decided to play it safe in face of more overtly styled competition, such as the Jeep Renegade, Mini Countryman, and Nissan Juke.

To our eyes, the simpler, squarer lines of the Trax are more effective than the flourishes and swoops worn by the Buick Encore, producing an altogether inoffensive exterior bordering on generic---but not quite.

As the base LS model is for budget-conscious buyers, it wears some fairly sensible footwear in the form of steel wheels with plastic wheel covers. Buyers looking for bigger, more expensive wheels will need to go to LT and LTZ models, which feature 16- and 18-inch alloys, respectively. Further pushing the budget look on base models are a lack of brightwork along its sides and the absence of roof rails, the latter of which are standard equipment on all other trims. However, the LS model does get body-colored pieces for its mirrors and rear license-plate surround.

Chevrolet's corporate "twin cockpit" interior styling makes an appearance in the Trax, though with a more utilitarian, practical, upright configuration and gauges almost identical to the Sonic. That instrument panel sees a 3.5-inch monochrome screen, which displays a numeric speedometer along with vital vehicle details and warning lights, placed beside a tachometer situated to its left.

Chevrolet's designers used black upholstery on Trax base models, but it's visually broken up with blue contrast stitching to relieve the effort of potential grimness. Shelling out for the top-trim LTZ brings nicer two-tone vinyl upholstery and console parts covered in patterned trim.

The Trax wears an exterior and interior design that's straightforward, practical, and probably well suited to its class and intended use, but would it have killed GM's designers and beancounters to take a few more risks?

The small turbocharged engine offers only mild power, and handling is controlled but unremarkable.

Compared to the Sonic, where the Trax finds its origins, the subcompact crossover gives up engine choice for the chance to split its power between more driven wheels.

The 2016 Trax arrives in the U.S. motivated by just a single engine, regardless of trim: a turbocharged 1.4-liter four-cylinder making 138 horsepower and 148 pound-feet of torque. Power is sent to the front or all four wheels via a six-speed automatic transmission. Maximum torque hits at revs as low as 1,850 rpm, all the way up to 4,900 rpm, making for solid acceleration around town without winding out the diminutive four pot. We additionally have to give credit where credit is due: we applaud Chevrolet for the Trax's $1,500 all-wheel-drive option that can be added to any trim in the model's lineup. Some automakers only make all-wheel drive available on pricer models.

Still, the same engine characteristics that make the Trax great around town also contribute to it not being the best freeway cruiser. Above 3,500 rpm, the 1.4-liter engine is a noisy travel companion--and it doesn't make up for that screaming with much additional gumption. Full-throttle sprints between 60 and 75 mph require planning. Blame the six-speed automatics gear ratios for this, which are focused on returning increased city fuel efficiency.

It should be mentioned the all-wheel-drive system in the Trax isn't built for mountain climbing. Instead, the system is aimed at delivering improved all-weather traction without garnering a huge fuel economy penalty; above 37 mph, the Trax sends all of its available power to the front wheels for improved fuel efficiency unless it senses wheel slip.

Regardless of driveline, the little Chevy is not a handler compared to some of its competitors, namely the Mazda 2-based CX-3 and lower-end versions of the Jeep Renegade. Body roll is noticeable. However, the Trax's electric power steering manages to feel good at nearly any speed, its solid-feeling chassis has a keen ability to absorb bumps, and its track is wide enough to negate the "tippy" feeling so common found in mini-utes of yore.

The Trax is commendably quiet for the class, but the utilitarian interior is a sea of hard plastic.

Quality is a tricky thing.

On one hand, the Trax models we've driven were free of rattles, squeaks, and buzzes (aside from the engine above 3,500 rpm). Chevrolet's engineers have spent considerable effort reducing wind and road noise in this humble crossover. From the cabin, the Trax's engine is whisper quiet at idle. And the transmission is almost eerie in how shifts to neutral when coming to a stop so as to minimize drivetrain vibration making its way into the cabin.

But on the other hand, materials used in the Trax's interior leave much to be desired. Soft-touch surfaces feel nice, but they're few and far between, leaving most of the heavy lifting in the hands of hard plastic that makes the Trax feel utilitarian and low-rent.

The Trax is perfect for thirsty occupants, equipped with four cupholders, once of which is accessible to rear-seat passengers. If you're the type of person to bring full pockets on road trips, the Trax boasts numerous storage bins, cubbies, trays, upper and lower glove boxes, door bins, and vertical slots with rubber bottoms for you and your passenger to place each of your cell phones.

Comfortable front seats with lower cushions and tilt/telescopic steering are great for taller drivers and the manual driver's seat on base models can be adjusted for rake and height. LTZ models include power front seats as standard equipment, but drivers and front passengers will still need to adjust the seat back manually via a short, difficult-to-find lever.

The Trax's 60/40 split-fold rear seats are simple to operate: a fabric tab under each section of the lower rear-seat cushion lifts it up and forward, then tilts it into the footwell. Once that's out of the way, put its rear headrests in their lowest position then pull the release levers on the outboard edge of each seat half to flip down the seatbacks. The result is a load floor that's essentially flat. With a front passenger seat with a foldable seatback, you can even haul cargo up to 8 feet in length, such as surfboards, 2x4 lumber, or that desk you've been eyeballing at IKEA.

Canada had the Trax for two years before the U.S., and one of the main reasons was the updates needed to improve its crash structure.

Those changes appear to have worked, as the Trax has received the top five-star overall rating from the NHTSA. It has also received the best ratings of "Good" from the IIHS in all tests, including the tough small overlap test. Those results were good enough for the Trax to be named a Top Safety Pick in 2015 by the IIHS, although that designation has been removed for 2016 because it lacks forward-collision avoidance systems.

Standard safety features consist of 10 airbags, including knee bags for both front occupants and even rear thorax bags to protect rear-seat riders' ribs during a side impact. Also standard are a rear-view camera, anti-lock brakes, traction and stability control, and a tire pressure monitor.

Used Chevrolet Trax for sale near

To attract younger buyers, Chevrolet outfits the Trax with such features such as a 7.0-inch touchscreen, 4G LTE connectivity, and a backup camera that cost extra on most rivals.

Pricing for the base-model Trax LS starts at about $21,000, from where you can add another $1,500 for all-wheel drive and rear disc brakes. That approximately $22,500 window sticker for an all-wheel drive Trax LS makes it the least expensive all-wheel-drive model in Chevrolet's vehicle lineup. The Trax LTZ tops out at around $29,000.

At up to 29 mpg combined, the 2016 Chevy Trax gets good fuel economy, but some newer competitors are more efficient.

The 2016 Chevrolet Trax delivers thrifty fuel economy, but it trails some of the newer entries in the subcompact SUV class, such as the Honda HR-V and Mazda CX-3.

The best fuel economy is achieved by front-wheel-drive models, which carry ratings of 26 mpg city, 34 highway, 29 combined, according to the EPA. That's 1 mpg higher than its sister vehicle, the Buick Encore. By comparison, the HR-V and CX-3 are rated at 31 mpg combined. In addition, if you sacrifice the all-wheel drive (AWD) and consider this a hatchback, there are numerous rivals that beat it, topped by the Toyota Prius C hybrid, which is rated at a combined 50 mpg.

Trax models with AWD are rated at 24/31/27 mpg—again one mpg better than the Encore. That combined number is in the ballpark of versions of the Mini Countryman and the Nissan Juke fitted with AWD and automatic transmissions. However, three Subaru models all do better. The XV Crosstrek gets 29 mpg, and the XV Crosstrek Hybrid and standard Impreza hatchback are rated at 31 mpg. The HR-V and CX-3 with AWD also return 29 mpg combined.

Be the first one to write a review on 2016 Chevrolet Trax
Rate and Review your car for The Car Connection! Tell us your own ratings for a vehicle you own. Rate your car on Performance, Safety, Features and more.
Write a Review
USED PRICE RANGE
$11,800 - $21,990
Browse Used Listings
in your area
7.6
Overall
Expert Rating
Rating breakdown on a scale of 1 to 10?
Compare the 2016 Chevrolet Trax against the competition
Compare All Cars
Looking for a different year of the Chevrolet Trax?
Read reviews & get prices
Related Used Listings
Browse used listings in your area
See More Used
The Car Connection Daily Headlines