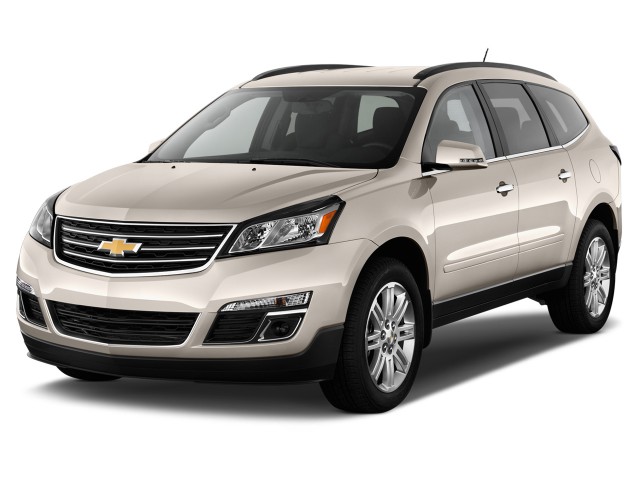 This is the last year for the current Traverse; GM will replace it with a new crossover SUV sometime in the 2018 model year. Deals should be plentiful.

The 2017 Chevrolet Traverse has aged gracefully; it's still one of GM's best minivan replacements.

Now in its ninth model year, the Chevrolet Traverse remains one of the most spacious, passenger-friendly vehicles on the market. It's a great alternative for any family that has specific reasons to avoid minivans—and doesn't care for the bigger, bulkier feel of a traditional truck-based SUV.

We rate it at 6.5 out of 10, with good scores in comfort and features overriding average scores in all other categories. (Read more about how we rate cars.)

The Traverse wears some universal Chevy styling cues, but it's the tallest, biggest wagon in the lineup. The design has seen very little change since its original introduction in 2009. Although the face is attractive and familiar, we're more found of the Camaro-influenced taillights, which break through a factory-farm of same-as crossover designs. Inside, the Traverse is nothing exciting, but it's very functional, and it is highlighted by wood and silver accents, some contrast stitching, and ambient lighting, as well as a fair share of soft-touch materials.

The Traverse may be nearly as big as a Tahoe, but it's more user-friendly and drives better, thanks to its car-like platform. It's not agile, but its handling is controlled, and the ride is smooth. At about 5,000 pounds, its 3.6-liter V-6 works every one of its 288 hp to give the Traverse decent acceleration. With the standard 6-speed automatic, the drivetrain duo works hard up highway grades and from standing starts. You can get either front- or all-wheel-drive, but AWD versions are a little more sluggish, though they can tow up to 5,200 pounds.

The Traverse's primary mission is people-moving, so GM has made the most of the seating space. Over three rows, there's space for up to eight occupants, with the seats divided into two front buckets and two 60/40-split benches. Bench or captain's chair arrangements are offered in the second row; we'd opt for the bench as the individual seats aren't much more comfortable.

There are a few weakness of the Traverse compared to minivans. First, the doors open wider than sliding side doors. Second, its cargo floor is a bit high and not as easy-loading. And third, even though it has 116.3 cubic feet of space with the second- and third-row seats folded down, that's about 30 cubic feet less than a minivan.

Safety is an important consideration for families, and the Traverse has scored well on the crash tests that have been performed—which is to say, not the newer, tougher ones. Standard safety features include parking sensors and a rearview camera. Premier models add blind-spot monitors, forward-collision warnings and lane-departure warnings.

Changes for the 2017 model year include a new Graphite trim package; the LTZ model has become the Premier.

Three trim levels of the 2016 Traverse are offered: LS, LT, and Premier. Premier models are really luxury models if you go by features, while LS trims are no-fuss (albeit well-equipped) family vehicles. All Traverse models get the Chevrolet MyLink system, which includes a 6.5-inch touchscreen, enabling smartphone integration as well as streaming of Pandora and Stitcher internet-based radio via a 4G LTE data subscription and an in-car wi-fi hotspot.

The Traverse carries ratings by the EPA of 15 mpg city, 22 highway, 18 combined with front-wheel drive, or 15/22/17 mpg with all-wheel drive. Those ratings land it dead center among three-row vehicles.

The Traverse has a softly curved silhouette and plainly composed cabin--both entirely forgettable.

Compared to its cousins, the GMC Acadia and Buick Enclave, the Traverse has neither the edgier design flair of the GMC nor the retro-curvy hints of the Buick Enclave.

The Traverse is essentially a tall, family-friendly station wagon. The design has changed very little since its original introduction in 2009, despite a minor facelift for the 2013 model year.

We give it a score of 5 for styling. There's nothing offensive or remarkable in any of its lines. (Read more about how we rate cars.)

Inside, the Traverse is nothing too exciting—maybe even a bit drab—but it's very functional. The cockpit design is very simple, with a layout that's pretty much a halfway point between what Chevy uses in its full-size SUVs like the Tahoe and what's in its mainstream sedans like the Malibu.

The Traverse features the three-bar upper grille and two-bar lower design that is common to Chevrolet crossovers. Darkened headlights and a sculpted hood round out the front end. In back, it has taillights that look a bit like those on the Camaro muscle car. Some bits chrome and brightwork give it some punch from certain angles.

The Traverse's best performance trait is its ride. What, you were expecting an Alfa 4C?

The Traverse is a family vehicle at its core, and it performs well enough for that use. However, with a 5,000-pound curb weight, we wouldn't call it agile or quick, though it does have a more car-like ride than GM's full-size truck-type SUVs.

It earns a 6 on our performance scale, garnering a point above the midline for its absorbent ride. (Read more about how we rate cars.)

The Traverse has pretty well-tuned, old-style hydraulic power steering, and despite its size, it responds fairly well to quick handling maneuvers. Ride quality is pleasingly compliant, and the cabin is mostly devoid of road, wind, or engine noise.

Both front- and all-wheel-drive (AWD) configurations are available. The Traverse feels quick enough for its intended family-hauling purpose, but we've noticed that AWD versions sap a little more power from the experience.

The engine is a smooth, direct-injected 3.6-liter V-6 that produces 281 horsepower and 266 pound-feet of torque (dual exhaust models bump up both figures, just barely). It needs to work hard up highway grades or from a standing start. Towing capacity tops out at 5,200 pounds with front-drive.

With the Traverse, Chevy has a minivan substitute almost as useful as Honda's Pilot.

With seating for up to eight passengers, and a tuck-away third-row seat, the Traverse is as close to a minivan as Chevy offers.

We give it a 9 for comfort and utility. It's good at carrying lots of people and cargo, and the seats themselves are good (and flexible). The cabin's nice, but could be better trimmed. (Read more about how we rate cars.)

The Traverse has plush and supportive front seats are plush yet supportive; they're as good as the chairs in any other big crossover SUV. Second-row passengers will find adult-sized space too. Chevy will outfit the Traverse with either a bench seat or captain's chairs in the middle row; the bench works fine, and we've found the individual seats aren't much more comfortable, and give up the eighth seating position.

Of course, it's a little harder to get into the third-row seat than in a minivan, since the Traverse has long hinged doors, rather than a sliding side-door setup.

The second-row seat slides on a track to make forward to provide access to the surprisingly comfortable (for children) third-row seats. Behind the third-row seat, the Traverse coughs up 24.4 cubic feet of storage space. With the second- and third-row seats stowed, the number blooms to 116.3 cubic feet of cargo space, which is lots of space—but not as much room as a minivan, and the load floor isn't as low.

Factor in the solid, high-quality buttons and switches, an intuitive control layout, and clear displays and you have a vehicle that excels from a functionality standpoint. The controls are also straightforward, and the cabin is outfitted with a pleasing amount of soft-touch materials, as well as attractive silver-accent details.

The Traverse has good, but outdated crash-test scores.

The Traverse has performed well in crash tests to date, but it hasn't been subject to new and updated tests.

We give it a 6 for safety, for its strong performance in federal tests. (Read more about how we rate cars.)

The NHTSA gives the Traverse five stars for overall crash-test performance; its only four-star score comes in the rollover-resistance category, typical for high-riding SUVs.

The IIHS hasn't put the Traverse through its new small-overlap frontal test, but in all other impacts the Traverse earns good scores.

Together with the closely related Buick Enclave and GMC Acadia, the Traverse is one of the first vehicles on the market to offer a front-center side airbag. Built into the driver's seat, this airbag helps protect the driver (or the driver and front passenger) from certain types of side impacts.

OnStar is included in all Traverse models; it includes six months of Directions and Connections service, with turn-by-turn navigation sent to the car by an operator, with no need to stop and input addresses. OnStar still includes Stolen Vehicle Assistance and an OnStar Mobile App for remote control of locking, engine starting, and remote viewing of vehicle information. Available Siri Eyes Free also helps drivers keep their eyes on the road rather than their iPhones.

Used Chevrolet Traverse for sale near

The 2017 Chevy Traverse doesn't have much in the way of killer apps or class-exclusive features, but it's well-equipped in all versions.

Almost unchanged for the 2017 model year, the Chevrolet Traverse comes in base LS, LT and Premier models. Each offers a choice between front- and all-wheel drive.

Given its smart array of standard and optional features, and its good infotainment system, we give it an 8 for features. (Read more about how we rate cars.)

The Traverse LS has all the expected standard equipment, including standard power locks, windows, and mirrors; keyless entry; cruise control; Bluetooth; a tilt/telescopic wheel; an AM/FM/XM/CD sound system; and a rearview camera.

Every Traverse comes with OnStar hardware, which can be linked by a data subscription to deliver turn-by-turn navigation, points-of-interest information, and a wi-fi hotspot.

Chevy's MyLink infotainment system also comes with every Traverse. The touchscreen-driven system is controlled via a 6.5-inch display, and enables smartphone connectivity and app-driven internet radio. Two USB ports are included; mounted at the back of the center console, they come in handy when passengers need to charge their mobile devices.

Other major options include heated and cooled front seats, a DVD entertainment system, and a power liftgate. The top-line Premier can be equipped with a panoramic sunroof, a rear spoiler, and dual exhaust outlets.

The Chevy Traverse can take the place of a more rugged, gas-hungry SUV, at least in passenger-carrying capacity.

In fuel economy, it's not much better than GM's truck-based utility vehicles. We give it a 5 out of 10 for gas mileage. (Read more about how we rate cars.)

The EPA rates the Traverse at 15 mpg city, 22 highway, 17 combined when fitted with all-wheel drive. The combined number rises to 18 mpg when front-wheel drive is chosen.

Those ratings land it dead center among three-row vehicles. Only rivals such as the Toyota Highlander Hybrid, Ford Explorer 2.0T (front-wheel-drive only), and Honda Pilot are better.

Unfortunately, in real-world drives, we've seen numbers that are typically a bit lower than those estimates.

Be the first one to write a review on 2017 Chevrolet Traverse
Rate and Review your car for The Car Connection! Tell us your own ratings for a vehicle you own. Rate your car on Performance, Safety, Features and more.
Write a Review
USED PRICE RANGE
$14,400 - $36,992
Browse Used Listings
in your area

6.5
Overall
Expert Rating
Rating breakdown on a scale of 1 to 10?
Compare the 2017 Chevrolet Traverse against the competition
Compare All Cars
Looking for a different year of the Chevrolet Traverse?
Read reviews & get prices
Related Used Listings
Browse used listings in your area
See More Used
The Car Connection Daily Headlines