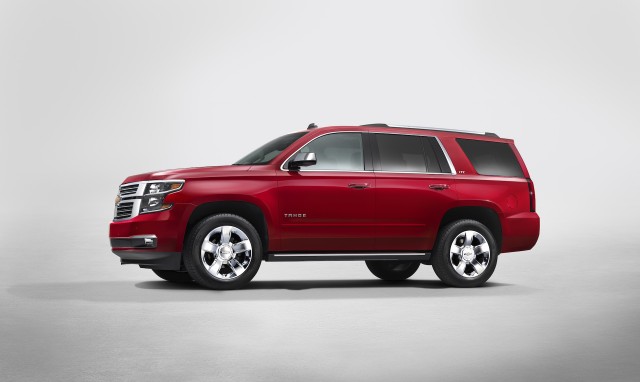 Base and mid-level models present the best buys in the Tahoe lineup. The Tahoe Premier has some of the same features found in a Cadillac Escalade—and the $70,000-plus price tag reflects Cadillac positioning, too.

The 2017 Chevy Tahoe delivers almost all the towing and hauling capacity of a full-size truck, and seating for up to nine.

The Chevy Tahoe marks the dividing line between full-size SUVs and the biggest of crossovers. It can seat up to nine passengers, sports standard V-8 power, and can tow up to 8,300 pounds. None of its car-based lookalikes can do that.

With rivals like the Ford Expedition and Nissan Armada, the Tahoe doesn't have it easy. It still works its way to the top tier of big SUVs, thanks to lots of power, creature comforts, and space.

Sold in Tahoe LS, Tahoe LT, and Tahoe Premier trims for the 2017 model year, we give the lineup an overall score of 6.2 out of 10. (Read more about how we rate cars.)

The Tahoe has a familiar look, one it shares in essence with the Silverado/Sierra trucks and the Yukon/Escalade SUVs. The very crisply folded wagon body is mostly shared with the Suburban, though that even bigger utility vehicle has a stretched cargo area.

The Tahoe's cabin is the relief from all the hard, straight edges that define the exterior. The interior is soothingly smooth and curved, with an 8.0-inch LCD touchscreen centerpiece and more overt car, and even luxury, influences than ever.

The Tahoe gets one drivetrain: it's a 5.3-liter V-8 teamed with a 6-speed automatic. With 355 hp and 383 lb-ft of torque on tap, the Tahoe can be fitted with rear- or four-wheel drive. Power is strong at all speeds, and the engine works well with the smooth-shifting automatic transmission. The Tahoe can tow up to 8,600 pounds when properly configured; fuel economy isn't bad for what the Tahoe can do, at up to 19 mpg combined.

With a body made mostly of high-strength steel, electric power steering, and available adaptive dampers, the Tahoe drives better than a vehicle of its size should. Steering feel is light but direct, and the ride is controlled and isolated when fitted with the standard live-axle, leaf-spring rear suspension. Tahoe Premiers come with GM's Magnetic Ride Control, which uses shocks filled with magnetically charged fluid that changes damping rates every few milliseconds. When equipped with the Magnetic Ride Control system, body control of the large SUV is remarkable, even on winding roads, while comfort is maximized. Agile? No, but the MRC-equipped Tahoe is a well-sorted machine.

The Tahoe's wheelbase is 116 inches long, while the Suburban's span is 130 inches. With all that space, the Tahoe can accommodate between seven and nine passengers, depending on the chosen seating configuration. An available power-folding option for the second- and third-row seats make it easy to convert from passenger duty to cargo-hauling mode. The cabin's storage bins are quite useful too, with a center console bin deep enough to hold a tablet or small notebook computers. The cabin is also much quieter than the previous Tahoes, matching nicely with the comfortable seating and stylish look.

The Tahoe's boxy, unadorned shape and simply styled interior make no missteps--but they don't take many risks, either.

The Tahoe's styling is simple, reserved, appropriate—but not that adventurous or particularly new. We give it a 5 in this category, as a result. (Read more about how we rate cars.)

Inside, the Tahoe wears a straightforward dash that presents a substantial, durable feel while also merging more car-like aspects to the control layout and overall shape. The materials are also a step above those of GM's pickups, bringing a markedly premium feel through modern shapes and themes and rich color palettes.

Unlike Tahoes of the past, the latest full-size Chevy utility vehicle doesn't share any of its body panels with the Silverado pickup, though the doors are set into the side of the body and triple-sealed like they are on GM's pickups. While the panels aren't the same, the SUV and pickups share a similar styling theme. As a truck-type SUV should, the look is tougher and more upright, with angular lines and a tall, commanding stance. Underpinning the crisp exterior lines is a focus on aerodynamics, to help boost gas mileage.

The Tahoe is a towing star, and its drivetrain is sweet, smooth, and strong.

The Chevy Tahoe is built for towing things and toting people, and its road manners are better than they probably need to be for those chores.

We give it a 7 for performance, adding to our baseline score of 5 for its V-8 engine and for its strong towing ratings. (Read more about how we rate cars.)

All Tahoes pair a powerful, rich-sounding V-8 with a 6-speed automatic. The V-8 engine kicks in 355 hp and 383 lb-ft of torque, but takes a good stab at cutting down on fuel consumption with direct injection and cylinder-shutoff technology, which effectively turns the 5.3-liter V-8 into a 2.65-liter V-4. That can yield remarkable gains in steady-state gas mileage, and the process is completely transparent to the user; there is no vibration or clunking to indicate the switch, just a little "V-4" or "V-8" indicator in the gauge cluster LCD display.

The 6-speed shifts smoothly, creating waves of seamless power, turning highway cruises into silent affairs. When configured just so, the Tahoe can tow up to 8,600 pounds.

The Tahoe is a carryover from the old days of truck-based SUVs, but the overall feeling behind the wheel is one of solidity and capability. It uses a solid-axle rear suspension, and it's big and heavy. Despite these drawbacks, the Tahoe drives better than it ever has. The electric power steering assist, a strong structure, and a modern drivetrain all come together to limit the sloppy, cumbersome, and trucky feel that has characterized the Tahoe in the past.

The Tahoe has lots of seats and lots of room, but lots of buyers will be better off with a Traverse.

The Tahoe has lots of spread-out room for up to nine passengers. It's so commodious—only Chevy's Suburban is bigger in the GM lineup—we give it an 8 for comfort and utility, with extra points added for its front seats, its ability to carry so many people, and its exceptional cargo space. (Read more about how we rate cars.)

The Tahoe comes with standard seating for eight, including 60/40 split-folding second- and third-row seats. Buyers can opt for second-row captain's chairs that cut capacity to as few as seven and a three-passenger front bench seat that ups max occupancy to nine.

Supportive seats, clad in supple (optional) leather make for comfortable seating in both the first and second rows. Both the second and third rows can be power operated. (Once folded, the second-row seats still have to be manually raised to accommodate occupants.)

The third row of the Tahoe is best reserved for shorter adults or children and teens, but it expands the usable seating to as many as nine occupants. Buttons in the rear cargo area allow the seats to be quickly stowed to increase cargo capacity, and the third row can be folded up just as quickly.

The Tahoe maxes out at 94.7 cubic feet of cargo space with the second and third rows folded flat, and it has 51.6 cubic feet behind the second row. In either configuration that's plenty of cargo space, but max cargo capacity is some 20 cubic feet fewer than Chevy's large crossover SUV, the Traverse.

Full-size SUVs have gotten more and more expensive over the years, and the Chevy Tahoe can now reach and exceed $70,000. However, Chevrolet has kept up with the times, outfitting the interior with quality materials and offering features and amenities expected by buyers willing to spend that much money. Its cabin is whisper-quiet, further enhancing comfort on the road.

Crash safety is implied by big, body-on-frame SUVs, but the Chevy Tahoe didn't fare well in the only tests it's undergone.

We give it a 4 for safety. (Read more about how we rate cars.)

The Tahoe has a wealth of standard safety equipment, from airbags to a rearview camera. All versions can be equipped with forward-collision warnings with automatic emergency braking; parking sensors; a lane-departure warning system; and adaptive cruise control. Chevy also will fit GM's Safety Alert Seat, which sends pulses to the left, right, or both seat cushion bolsters to warn drivers of a possible danger.

All that equipment can't overcome data. The NHTSA gives the Tahoe top five-star ratings for frontal offset and side-impact protection--but it's given only a four-star overall rating, largely due to its three-star rollover-resistance score.

The IIHS doesn't test large body-on-frame SUVs, but if they change their minds with the Tahoe, we'll update this page and the scores accordingly.

Used Chevrolet Tahoe for sale near

Top Tahoes have all the features you'd expect in an Escalade.

Chevy sells the Tahoe is LS, LT, and Premier models. We give it an 8 for features, since the standard and optional equipment list is strong, and so is the no-fuss MyLink infotainment system. (Read more about how we rate cars.)

Numerous other features are available, including a rear-seat entertainment system with Blu-ray DVD capability, a sunroof, a hands-free power tailgate, fog lamps, wireless charging for cell phones, a memory system for the seats and power-adjustable steering column, and an 8.0-inch configurable display in the instrument cluster with a head-up display.

A Tahoe Premier with a few equipment packages can top $70,000, but at that level, the equipment and convenience factor matches a modern luxury sedan or crossover.

The Tahoe earns mediocre fuel economy—given its weight and mission, that's a victory.

The Tahoe's gas mileage earns it a green score of 5 out of 10. It's not the thirstiest SUV on the road, but it's not far off the low-water mark, either. (Read more about how we rate cars.)

That's a given, considering the Tahoe is a truck-based SUV pushing 5,500 pounds of curb weight—or 5,700 pounds with four-wheel drive.

The Tahoe's V-8 is fairly economical, given those dimensions. With rear-drive, it's rated at 16 mpg city, 23 highway, 18 combined. With four-wheel drive, the ratings are 16/22/18 mpg, according to the EPA.

Real-world fuel economy may be even higher than indicated by the EPA ratings, depending on driving habits, as a standard cylinder deactivation system effectively transforms the Tahoe's V-8 into a 4-cylinder under low-load driving.

Be the first one to write a review on 2017 Chevrolet Tahoe
Rate and Review your car for The Car Connection! Tell us your own ratings for a vehicle you own. Rate your car on Performance, Safety, Features and more.
Write a Review
USED PRICE RANGE
$23,990 - $54,998
Browse Used Listings
in your area
6.2
Overall
Expert Rating
Rating breakdown on a scale of 1 to 10?
Compare the 2017 Chevrolet Tahoe against the competition
Compare All Cars
Looking for a different year of the Chevrolet Tahoe?
Read reviews & get prices
The Car Connection Daily Headlines