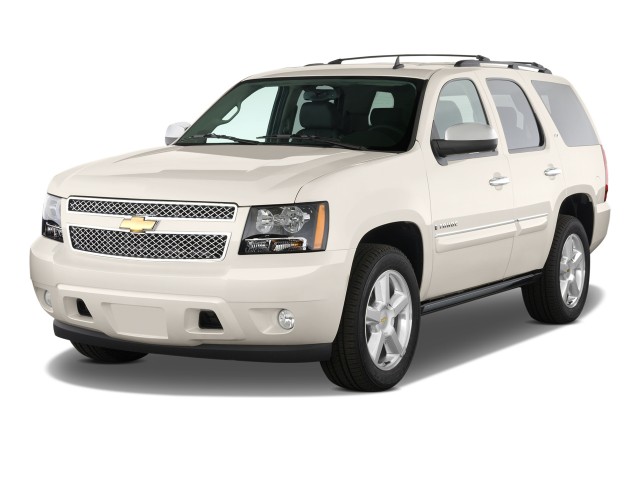 When cargo space and a third-row seat matter, the Chevy Tahoe comes up a little short--which is why you'll need to shop the long-body version, the Chevy Suburban.

The rugged, honest Chevy Tahoe doesn't exactly lack for luxury, but it's a more pragmatic choice for those who don't really need the luxury layers applied to Yukons, Escalades, or GLs.

Times have changed since 2006, when the Chevy Tahoe was new and GM's big sport-utility vehicles were a critical part of its product plan. There wasn't even a Chevy Traverse crossover in its lineup at the time--and GM even sped up development of the big truck-based utes (Tahoe, Suburban, Yukon and Escalade) to take advantage of the still-hot SUV boom.

Gas prices and recession took the wind out of the Tahoe's sails. Today most of those families have downsized, moving to sedans, or more likely, moved to smoother, more carlike crossovers. But big swaths of American drivers still look to these more truck-like SUVs for everyday family use. Body-on-frame sport-utility vehicles like the Tahoe remain your best option if you need truck toughness, for regular towing and good passenger space.

The Tahoe's no relic, in that frame--it remains competitive even in this final abbreviated year of production, before a new model arrives for the 2015 model year. GM gave the Tahoe, and the related GMC Yukon and Cadillac Escalade some very good bones, as well as chiseled good looks that have stood up well to the test of time.

The time-tested Tahoe isn't going to knock you out with its exterior design, but it remains very handsome and contemporary, thanks to lots of work that went into making its surfaces flush and its lines clean. The Tahoe's styling follows a basic two-box SUV design, rounded ever so slightly at the corners, with gently flared fenders. A wide band studded by a bowtie logo splits the large grille, and it's flanked by a pair of very big headlights, squared off into the fenders. The Nissan Armada and Toyota Sequoia can appear overwrought, but the Tahoe feels just right for those who don't need to assert themselves.

Inside, it's a little less rosy; the Tahoe's instrument panel and trims (as with those in the rest of GM's full-sizers) now look dated next to Chevy's cars and crossovers and somewhat out of place next to the more macho-styled alternatives from other automakers. The Tahoe LTZ gets much-upgraded materials; a band of trim runs across the dash and gives the cabin a spacious appearance, and large, well-marked gauges are framed by the steering wheel, with a wide center console alongside.

The Tahoe now comes only with a 5.3-liter V-8 with 320 horsepower, coupled to a six-speed automatic transmission. The former Hybrid model is not available for the 2014 model year, and we haven't heard whether it will return with the next-generation vehicle. The gas drivetrain is a well-executed combo that doles out smooth, steady acceleration as well as a little of the muscle-bound V-8 sound. It also has cylinder deactivation, which shuts off fuel to half the cylinders under coasting or deceleration. On most of the lineup, rear-wheel drive is standard, with a dual-range four-wheel-drive system available.

With a fully boxed frame, coil-over-shock front suspension, and rack-and-pinion steering, the Tahoe blends traditional truck duty with more modern standards of drivability and responsiveness. At its best, the Tahoe is as responsive as any 5,600-pound vehicle can be and feels much more maneuverable than it should. Base versions of the Tahoe don't quite ride as well as top-of-the-line Tahoe LTZ models with the magnetic suspension, however. Powertrain Grade Braking helps improve stability when making long descents.

The Tahoe is unremarkable in terms of gas mileage. The ute earns an EPA score of 15/21 mpg--which is an improvement over the truck-based full-size SUVs of a few years ago, but still short of the three-row crossovers that make a better choice for many families.

All standard Tahoe models are also E85 (85-percent ethanol) compatible; but unless you live next to a cornfield the economics probably won't work out, let alone the questions about environment. When you fuel up with ethanol you'll get an EPA-estimated 11 mpg city, 16 highway.

For the most part, the Chevy Tahoe has a very roomy interior, with plenty of passenger space and comfort. In the third row, however, that's not quite the case.

In front, the Tahoe's wide, somewhat flat bucket seats are split by a wide console that still leaves plenty of leg and knee room. Head room isn't an issue, either, though we've noticed the big GM SUVs have front seats that don't power down to as low a driving position as we might want. On base Tahoe LS models, you can still get a split front bench seat that might be a better choice for those who use the Tahoe for work.

Three adults can fit across in the second row of the Tahoe--in reasonable comfort--but the Tahoe's third row isn't quite adult-duty. It's not only very tight, but it's hard to get past the second row and back there. Once in position, leg and head room aren't great, the seat cushion is low to the floor. Those trying to wedge into the third row on Hybrids will also find that the battery takes up valuable space under the second-row seat.

With the third row merely flipped forward, there's an impressive 60.3 cubic feet of cargo space in the Tahoe. But flip that rearmost row up and there's just 16.9 cubic feet; there's literally not much space behind that seat. We'd recommend the power tailgate here; as much as we laugh at the possibility in some vehicles, this is a genuinely high and hard-to-operate hatch--especially if you only have one arm free.

The Tahoe does remain fully competitive for refinement and interior noise; these GM full-size SUVs seal out road and wind noise very well. The only quality down side is that the cabin trims and materials just don't stand up to those used in some luxury-brand vehicles. And top Tahoe models are priced well into the range of several luxury SUVs.

The Chevrolet Tahoe definitely builds an impression of heft and safety from appearance alone. Big SUVs haven't always provided top-notch protection that they hint, but in the case of the Chevrolet Tahoe, that first impression isn't at all off the mark. The Tahoe has earned solid crash-test scores and has a respectable set of safety features--some of which might help avoid an accident.

The Insurance Institute for Highway Safety (IIHS) hasn't yet tested the Tahoe, but the National Highway Traffic Safety Administration (NHTSA) has tested it under its new, tougher rating system. In that, the Tahoe earned five-star ratings for both frontal and side impact. While they haven't yet extended those ratings to the 2014 model year at the time of posting, we expect them to cover the essentially carry-over model.

Dual front, side, and curtain airbags that cover all rows of seats; traction and stability control; and OnStar security and concierge services are all included across the Tahoe lineup.

With the Tahoe's rather tall stance and wide rear pillars, outward visibility can be a problem and require some double checks for parking and lane changes. For that, the newly standard rearview camera system is welcome, as are the rear parking sensors; a blind-spot warning system is available.

The Tahoe's work-truck days are long gone, and today's models come at least as well-equipped as a sedan--on top of its rugged truck hardware.

A Bluetooth hands-free system and a USB port are now included even in the basic Tahoe LS; for 2014, Chevy's added power-adjustable pedals, remote start, and a rearview camera with rear parking sensors to the standard-features list. Satellite radio capability, cruise control, and power windows, locks, and mirrors are also included at the base level, as are rear-seat audio controls, steering-wheel audio controls, and a choice of front bucket seats or a split front bench seat.

For the crowd that continues to get Tahoe models as luxurious family vehicles with strong weekend towing capability, there are the LT and LTZ models. On those upper trims, you can get a load-leveling suspension and a heavy-duty locking differential. Pricey options include a Bose Centerpoint audio system, a nav system with voice recognition, heated and cooled front seats, heated second-row seats, tri-zone climate control, and additional power outlets.

Be the first one to write a review on 2014 Chevrolet Tahoe
Rate and Review your car for The Car Connection! Tell us your own ratings for a vehicle you own. Rate your car on Performance, Safety, Features and more.
Write a Review
USED PRICE RANGE
$12,000 - $34,995
Browse Used Listings
in your area
7.4
Overall
Expert Rating
Rating breakdown on a scale of 1 to 10?
Compare the 2014 Chevrolet Tahoe against the competition
Compare All Cars
Looking for a different year of the Chevrolet Tahoe?
Read reviews & get prices
Related Used Listings
Browse used listings in your area
See More Used