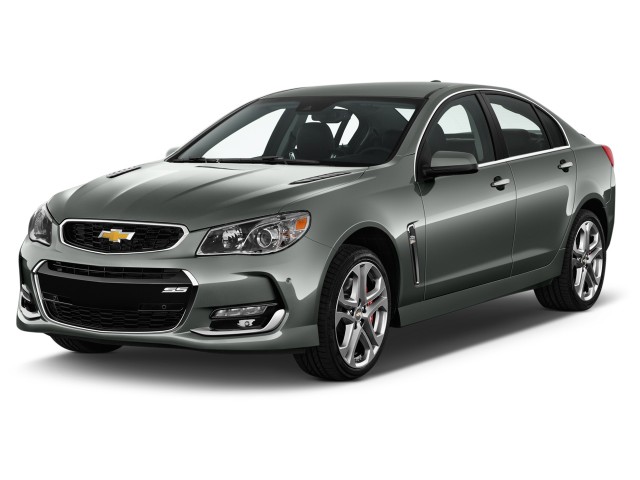 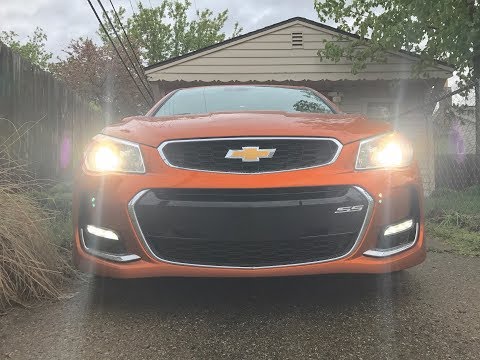 If rowing your own gears wasn't enough reason to choose the manual transmission, it also avoids the $1,300 gas-guzzler tax.

With V-8 power, agile handling, and a spacious five-passenger interior, the 2017 Chevrolet SS is sedan equivalent of the Camaro coupe.

The Chevrolet SS is one of the most understated, performance vehicles you can buy today. Offered only in one model, the SS is also the brand's first V-8-powered rear-drive sedan since Impala SS production ended in the '90s.

Close to the end of its run, the 2017 Chevrolet SS gets no changes other than the addition of two new colors: Orange Blast and Nightfall Gray Metallic.

The SS is possible thanks to GM's ownership of the Holden brand in Australia. Down under, the Chevrolet SS doesn't have a bowtie on its grille. Instead, it wears a Holden badge and it's called the Commodore. And this isn't the first time GM has pulled this trick. The Pontiac G8 was also, essentially, a Holden Commodore. The Chevrolet Caprice PPV, a sibling of the SS, is sold exclusively to police and other law enforcement agencies.

And yet, the SS sports an almost-generic design. Snooze-worthy, even. But give it a closer look. It's wedgier shape and tapered greenhouse sat upon staggered wheels hint at its performance-focused intentions. That's the formula for a true sleeper.

The rear-drive architecture has a near-perfect 52/48 weight distribution and is backed by some serious performance hardware. Brembo performance brakes stop the burly brute on a dime via Z-rated rubber, the rear axle is kept in place by a multi-link independent suspension, and GM's Magnetic Ride Control dampers are standard. Like those available on the Camaro and Corvette, these dampers rely on magnetic fluid to change responsiveness and damping between three modes: Performance, Sport, and Tour.

It's all these ingredients combined that make the Chevrolet SS a serious corner carver, but also comfortable enough for daily commuting or longer trips on decently maintained roads; Magnetic Ride Control's Tour mode filters out bumps, but it's still a bit firm for rougher surfaces or more sensitive drivers and passengers. Sport and Performance modes stiffen up the chassis even more and turn up steering sensitivity, making steering reaction sharper and quicker.

Under the hood sits only one engine in America: a 415-horsepower 6.2-liter V-8 from the last-generation Corvette, albiet with a slightly different tune. Its married to either a six-speed automatic or a six-speed manual. Chevrolet claims the SS will rocket up to 60 mph in as few as 4.7 seconds. On the way up to that benchmark, you'll be blessed with an orating engine thanks to a dual-mode exhaust that turns up the burble at full trot.

But it's not a mechanically perfect combination. The automatic transmission, for instance, is too slow and muted to deliver on all its performance promises. In regular "Drive," the transmission is lazy; move it to "Sport" and shifts still aren't sharp enough to match the eager V-8. However, should you sign on the dotted line for the SS, you can also choose the available six-speed manual, giving you full control over when you catch that next upshift. It's clutch takes some practice to master; clutch engagement is on the high side of pedal travel, making it difficult to shift smoothly and easy to stall. But with patience, it all comes together to offer smooth and fairly short throws from the wrist.

As they say, if you need to ask, you probably can't afford it. We're not talking about Chevrolet's pricing for the SS, but of the saloon's fuel economy figures. According to EPA estimates, models equipped with a stick will see 14 mph city, 22 mph highway, and 17 mph combined, just high enough to avoid the gas-guzzler tax. Swapping out the manual for the automatic sees the highway and combined numbers drop to 20 mpg and 16 mpg, respectively, decreasing just enough for Uncle Sam to get his hands into your pockets for the gas-guzzler tax.

Cabin isolation is provided by hydraulically damped suspension bushings, though the cabin didn't block out as much road noise as we would have liked during our highway testing. Still, the aggressively bolstered front sport seats provide enough comfort and support for those long drives and the rear row has more than ample room for adult passengers.

Keeping you safe in the SS is a suite of safety aids, such as forward collision warning, lane departure warning, blind-sport monitoring, rear cross-traffic alert, and a rearview camera. Further to those, the SS is equipped with eight standard airbags, including knee airbags for both driver and front passenger. Unfortunately, due to the SS being a low volume, niche vehicle, neither IIHS or NHTSA has conducted independent crash testing on the sedan.

You won't find a significant number of options available on the SS. However, it is the first Chevy to provide Automatic Parking Assist, a system that automatically maneuvers your car into parking spaces, even on manual-equipped models. Other standard features include leather upholstery, dual-zone automatic climate control, HID headlights, heated and ventilated front seats, keyless ignition, remote start, head-up display, and a 220-watt Bose audio system. Like other Chevrolets, the SS comes with MyLink infotainment on a 8.0-inch touchscreen with navigation. The system includes advanced features for specific smartphone apps in addition to the usual complement of hands-free phone and media streaming features. Chevrolet additionally offers 4G LTE connectivity and a wi-fi hotspot through its OnStar system, though you'll have to pay a monthly fee to keep it operational.

The 2017 SS is priced around $48,000, including the $1,300 gas-guzzler tax when optioned with the automatic transmission. Chevrolet offers the SS with a six-speed manual as a no-cost option. A sunroof will set you back another $900, while a full-size spare will run you $500. And those are your options aside from picking a shade from Chevrolet's available color palette and accessories from the Chevy store, such as stripes, grilles, and fog lights.

Be the first one to write a review on 2017 Chevrolet SS
Rate and Review your car for The Car Connection! Tell us your own ratings for a vehicle you own. Rate your car on Performance, Safety, Features and more.
Write a Review
USED PRICE RANGE
$35,888 - $43,990
Browse Used Listings
in your area
6.6
Overall
Expert Rating
Rating breakdown on a scale of 1 to 10?
Compare the 2017 Chevrolet SS against the competition
Compare All Cars
Looking for a different year of the Chevrolet SS?
Read reviews & get prices
Related Used Listings
Browse used listings in your area
See More Used