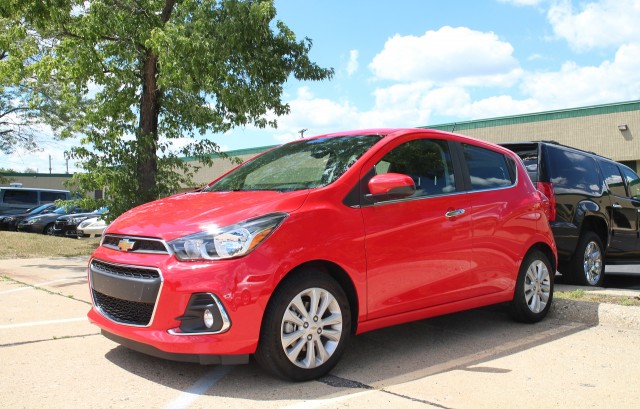 While the 2016 Chevy Spark is all new, its battery-electric version lives on for one more year in the previous body style--until the 2017 Chevrolet Bolt hits showrooms in late 2016.

The 2016 Chevrolet Spark is an all-new version of the minicar that actually seats four adults; its more "adult" styling, higher-quality materials, and optional active-safety features may make it the best of the tiny cars.

The 2016 Chevrolet Spark five-door hatchback is an all-new version of the smallest Chevy made. The new generation has more substantial and adult looks, slightly more power, and some sophisticated features found neither in other minicars nor its predecessor. It's offered in three trim levels: base LS, mid-range 1LT, and top-of-the-line 2LT.

The Spark will never be Chevy's best-selling car, though the previous generation sold better than expected over its three-year life. Still, this car's biggest audience is buyers in more than 40 other countries around the world where a car this small is basic family transport. In North America, it's more likely to be bought as a city car or a first vehicle—one reason it's built in South Korea, closer to its market.

The 2016 Spark remains essentially a tall box, but its wheelbase is incrementally longer and the car is about an inch and a half lower than it was last year. Chevrolet's designers say the new Spark's sheetmetal is "shrink-wrapped" over the cabin, with a wheel at each corner. As before, elliptical headlights sweep back around the top corners of the hood, almost to the base of the windshield.

This time, though, the Spark has a more defined hood and nose, with a vertical grille and horizontal bar giving it more presence and stance than the wedge-shaped front of the last version. It's still very small, but it's less toy-like now. Accent lines across the sides break up the slabby shape, and the taillight lenses protrude from the body to add further visual interest.

Inside, the dashboard and doors still have body-color panels in places, silver trim in others, but the dash center now has a more traditional center stack. A more substantial instrument cluster features a new dot-matrix LCD display between real gauges, and the MyLink radio system includes a 7-inch touchscreen display in the center of the dash.

The 2016 Spark is powered by a 98-horsepower 1.4-liter 4-cylinder engine, 16 percent more powerful than the previous 84-horsepower, 1.2-liter four. Once again, the Spark's engine drives the front wheels through either a 5-speed manual gearbox or a continuously variable transmission (CVT). The CVT version gets slightly better EPA fuel-economy ratings, at 31 mpg city, 41 mpg highway, 35 mpg combined, while the 5-speed is rated at 30 city, 41 highway, 34 combined. Note that the larger (but pricier) Honda Fit gets slightly higher ratings.

The manual Spark is more fun to drive enthusiastically, though, which is really the best way to use a small and not very powerful car. The CVT will give you as much power as it can, but it does suffer from the usual engine howl under maximum power, when the engine runs up to high speeds to generate as much torque as possible. Especially from a standing stop, or on sudden acceleration after loafing along, there's just not a lot of power there, but it can be hustled enough to keep up with traffic—if you flog it.

That lack of power also showed up in an unexpected place: on a sunny, hot, and humid Detroit day, the air conditioning barely kept up even set to maximum output and fan speed. It was okay with all vents pointed at a single driver, but we question its ability to cool four adults.

Handling and roadholding is typical of a small car with soft enough springs to keep it comfortable on lousy roads. That is, the Spark is no Volkswagen GTI, but it strikes a reasonable balance between comfort and handling. And it's certainly small enough to park easily. Not as easily as a Smart ForTwo, perhaps, but it's shorter than a new Mini Cooper (and holds a whole lot more inside too).

The front seats look small, but for this driver they proved just big enough and bolstered in just the right places. The seats are slightly lower now, which Chevy says is "more engaging" and lets occupants sit "in the seats rather than on them." We'd concur. Chevrolet also says the materials--everything from seat fabric to cushion foam--are of a higher quality, contributing to a feel that's less like an economy car than before. Headroom continues to be remarkable for something with such a small footprint, and four adults can be accommodated, in somewhat upright seating positions. And the tiny cargo bay will actually hold soft luggage despite its minimal appearance.

The 2016 Spark hasn't yet been rated at all by the National Highway Traffic Safety Administration (NHTSA). The Insurance Institute for Highway Safety (IIHS) has rated it only partially, giving it the top score of 'Good' for moderate-overlap front crash and side impact tests only. Chevy says its new body shell is stronger and more robust than before, and it's worth noting that the previous Spark was one of very few small cars to be named an IIHS Top Safety Pick. The 2014 Spark was the sole small car of 11 tested to be given a rating of "acceptable," due to its good performance on the new and tougher Small-Overlap frontal crash test.

Still, the new Spark stands out from competitors like the Mitsubishi Mirage is its level of standard and optional safety equipment. Both a rearview camera and rear parking-assist sensors are standard on every model, as are no fewer than 10 airbags. New camera-based optional safety systems, only rarely found on cars this small, include lane-departure warning, side blind-spot alert, and forward-collision alert.

All 2016 Spark models come standard with power windows and door mirrors; air conditioning; the MyLink display system with an icon- and swipe-based interface like those of smartphones or tablets; OnStar with 4G LTE connectivity capability; and a built-in WiFi hot spot. The base Spark LS with manual gearbox starts at less than $14,000, including mandatory delivery fee, and adding the CVT boosts the base price by $1,100.

7 Reviews
5 star
71%
4 star
29%
3 star
2 star
1 star
Rate and Review your car for The Car Connection! Tell us your own ratings for a vehicle you own. Rate your car on Performance, Safety, Features and more.
Write a Review
2016 Chevrolet Spark 5-Door HB CVT LT w/1LT

A bunch of things I'm fine with: I've fit four people into this car, although only one was a tall guy. Me and another big dude can fit into the front seats with no problem provided we stagger the seat backs. AC works well. The sunroof is big. Power is fine around town and you can throw it into L mode for hills.

Things I don't like: The CVT in general isn't great and revs high at highway speed. Often won't give you any power starting in D on steep hills, you need to throw it into L. Wish I'd got a manual. Tiny cargo area and flipping the seats down requires yanking up the bench and then pushing the seat backs down and kills any front leg room. Plastic steering wheel on everything but the 2LT trim. Stock Kumho tires are very, very bad in snow, get winters. + More »
people found this helpful.
Was this review helpful to you? Yes
2016 Chevrolet Spark 5-Door HB CVT LT w/2LT

The Little Engine That Could

The Spark gives me The Little Engine That Could vibe; or as Annette once said: "Frankie's small, but he's wiry!"

Based on my other Chevy, I give the Spark an early Reliability rating of 5 stars. + More »
people found this helpful.
Was this review helpful to you? Yes
2016 Chevrolet Spark 5-Door HB CVT LT w/1LT

Overall I feel alive while I am driving the Spark you don't "sit on" the seats you kinda "sit in" the seats like driving a "go kart". Mind you this kind of driving undoubtedly leads to more road noise than you would find in a Benz or BMW.

I found alot of cars with the similar styling I test drove had a blind spot at the front left windshield beam; but I find the Spark much better for visibility.

The only drawbacks are when it rains the rear back up camera can be a bit cloudy. Also the rear view mirror can sometimes reduce visibility.

Overall I am impressed with the Spark to date. + More »
people found this helpful.
Was this review helpful to you? Yes
For 2016 Chevrolet Spark

ELECTRIC Spark is great fun and cheap to run