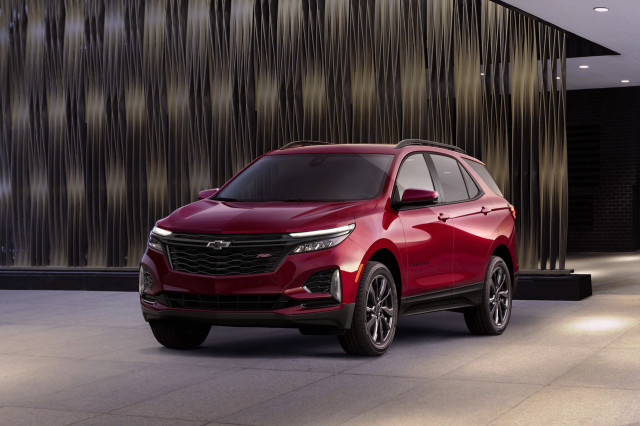 The 2022 Chevy Equinox secures its passengers well but doesn’t stand out among snappier, techier crossover SUVs.

What kind of car is the 2022 Chevy Equinox? What does it compare to?

The Equinox is Chevy’s compact crossover SUV. Rated to seat five, and rigged with a turbo-4 engine and available all-wheel drive, it parks at the intersection of Practical St. and Value Rd. Pit it against a Ford Escape, a Honda CR-V, or a Subaru Forester.

Safety is its best feature; otherwise, the Equinox suffers against quicker, better-equipped, more enticing rivals. We give it a TCC Rating of 6.2 out of 10. (Read more about how we rate cars.)

Chevy has dropped the former 252-hp turbo-4, added an RS trim level, and dumped the former base L edition, while it’s also tweaked the Equinox’s looks.

Sold in LS, LT, RS, and Premier versions, the Equinox doesn’t stand out in style as much as its prime competition. It goes for a plainly drawn body and interior with inoffensive curves and lines. It’s a utility vehicle and its shape captures that, relentlessly, as does its simple, neatly organized interior.

The 170-hp turbo-4 in the Equinox can’t generate the excitement of its former 252-hp version. Acceleration’s middling at best, and the 6-speed automatic in charge of delivering power to the front or all four wheels is a cog or three behind the times. It’s still smooth and unobtrusive—and the Equinox’s well-sorted ride and handling make it an amenable commuter car.

So does its interior space and safety set. Four big adults fit well; the Equinox lays out lots of leg and head room, though it no longer offers a sliding second-row seat. It does have almost 70 cubic feet of cargo space with the rear seatback folded. All versions have automatic emergency braking, and the Premier edition has a surround-view camera system, blind-spot monitors, and parking sensors.

How much does the 2022 Chevy Equinox cost?

The $26,995 Equinox LS comes with cloth upholstery, manual front seats, and wireless Apple CarPlay and Android Auto served out via a 7.0-inch touchscreen. Power windows, locks, and mirrors are included on the whole lineup. Chevy charges $1,600 for all-wheel drive on any version. We like the $29,695 Equinox LT, which has a power driver seat, a power tailgate, and an 8.0-inch touchscreen; dressed with optional blind-spot monitors, adaptive cruise control, and a surround-view camera system, it costs a reasonable $33,035.

Where is the Chevy Equinox made?

Is the Chevy Equinox a good-looking car?

No better than average, according to our eyeballs. It’s been finely tuned to inspire not a shred of controversy—or excitement for that matter. It’s a 5 for us.

The Equinox has been touched up this year, with slimmer headlights and a reworked front end. It’s composed of lots of gentle curves and gradual slopes, not a daring line among them, save for the faintly jetlike trim that splits the headlights from the grille. From the plain door panels to the blend-in taillights, it’s a design that could wear any number of badges, American or otherwise.

The cockpit’s symmetric shape groups vents and a touchscreen up high for ease of use, with big round knobs for climate controls and glints and hints of metallic trim to relieve the somber black-plastic atmosphere. It’s most dressy in Premier trim, where the dash panels get stitched leather to dress up what’s otherwise anodyne—the car equivalent of a workplace cube.

With the Equinox, Chevy has dropped the former 252-hp turbo-4, leaving its compact crossover with a lower-output engine and an older transmission to execute its daily chores. It’s a 5 for performance, straight up the middle.

How fast is the Chevy Equinox?

Not very. The Equinox now just comes with a 170-hp 1.5-liter turbo-4. It twists out 203 lb-ft of torque through a 6-speed automatic, but it’s still no more than reasonably quick and modestly satisfying.

Is the Chevy Equinox 4WD?

It’s front-wheel drive, but a simple all-wheel-drive system is an option on all trims. It’s not set up for off-road use; it sends up to half of the Equinox’s power to the rear wheels when front traction slips.

Commuting’s rather pleasant, thanks to the Equinox’s composed ride and too-tame handling that won’t offend any driver. It’s better, in fact, on lower-priced versions with smaller wheel-and-tire combinations, where it absorbs poor road quality with aplomb. The 19-inchers that can be fitted to expensive models cost a lot ($1,995) and seem less practical than they are stylish. It doesn’t have much steering feedback, but the Equinox has a light touch and keeps in its lane without needing frequent correction.

With seats for four and good cargo space, the Equinox’s ready to check any errand off the to-do list.

Chevy rates the Equinox as a five-seater, but it’s best bought as a four-seat wagon with excellent cargo space. It’s great at utility, though it delivers it without much enthusiasm. We give it a 7: Good front seats and swell cargo space sit in a drab interior without the best feature from the previous-generation Equinox.

In front, the Equinox’s manual-adjust seats have limited range and cloth upholstery. The more spendy versions have power adjustment for the driver (but not the front passenger), lumbar padding, and leather upholstery, as well as heating. Space is ample, and so is small-item storage, but the dash’s plain shapes and basic-grade trim takes steps back from the similar GMC Terrain’s finer polish.

With no sliding second-row seat as it’s had in the past, the Equinox still seats two bigger people, with a third squeezed in the middle for short trips. Its 39.9 inches of leg room makes up for the fixed seat—and so does the fold-down seatback, which upconverts the 29.9-cubic-foot cargo hold into a big and useful 63.9 cubic feet.

Every Equinox has active noise cancellation and middle-grade interior trim, but only the leather-trimmed Premier edition rises above its station in life.

The Equinox does well in crash tests.

How safe is the Chevy Equinox?

Both the NHTSA and the IIHS give it strong scores. The NHTSA pegs it at five stars overall. Meanwhile, the IIHS dubs it a Top Safety Pick—while it gives the similar GMC Terrain a pass on the title. The difference? The Equinox has better headlights.

New Chevrolet Equinox for sale near

Spend less on the Equinox for the best value.

Sold in LS, LT, RS, and Premier versions, the 2022 Equinox is best in LT trim, where its standard features list and infotainment offset a mediocre 3-year/36,000-mile warranty and slim options. It’s a 7 here.

Which Chevy Equinox should I buy?

Step up to the $29,695 Equinox LT, which comes with keyless start and a power driver seat, and can be fitted with a power tailgate, an 8.0-inch touchscreen, and heated and cooled front seats. With a surround-view camera system, blind-spot monitors, and adaptive cruise control, as well as remote start, heated front seats, and all-wheel drive, it rings up a $33,035 tab.

How much is a fully loaded Chevy Equinox?

The $33,795 Equinox Premier AWD has leather upholstery, a power front passenger seat, and an 8.0-inch touchscreen, and can be fitted with Bose audio, navigation, a panoramic sunroof, and 19-inch wheels. A fully loaded Equinox can carry a sticker price of well over $40,000.

Gas mileage is one Equinox strength.

Is the Chevy Equinox good on gas?

With either all-wheel drive or front-wheel drive, the 2022 Equinox earns EPA combined ratings above 25 mpg, which earns a 5 here.

Be the first one to write a review on 2022 Chevrolet Equinox
Rate and Review your car for The Car Connection! Tell us your own ratings for a vehicle you own. Rate your car on Performance, Safety, Features and more.
Write a Review
$25,800
MSRP based on FWD 4-Door LS w/1LS
Change Style

Drivetrain
Trim
Other
See Your Price
6.2
Overall
Expert Rating
Rating breakdown on a scale of 1 to 10?
Compare the 2022 Chevrolet Equinox against the competition
Compare All Cars
Looking for a different year of the Chevrolet Equinox?
Read reviews & get prices
Related Used Listings
Browse used listings in your area
See More Used