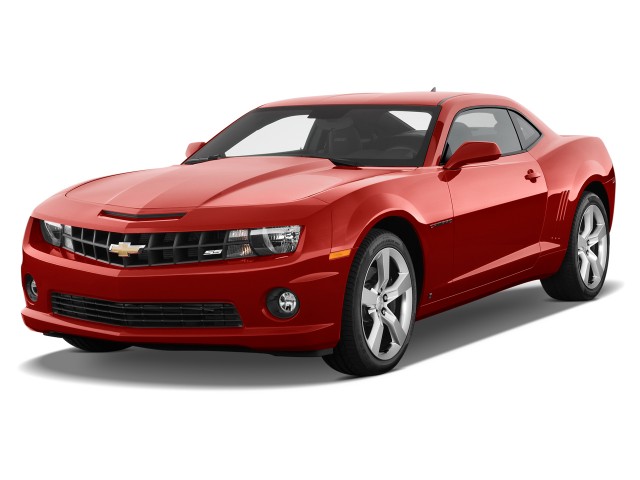 Taller drivers need to remember that short headroom in the 2012 Camaro might mean the optional sunroof is not viable.

The 2012 Chevy Camaro isn't practical, but it's stunning to look at and offers scorching performance--even without the ZL1 package.

Back for its third model year since introduction in 2009, the 2012 Chevrolet Camaro retains its retro-themed yet modern take on the Camaro's heritage, with the addition of a hyper-powerful ZL1 variant in addition to the standard V-6 and SS models. Whether you choose the coupe or the convertible, the 2012 Camaro makes a strong style statement.

When the muscle car revival first struck with the return of the Camaro and Challenger, sales lit up like a wildfire--and haven't slowed much since. This year, the 3.6-liter V-6 variant once again gets a power increase from 312 to 323 horsepower, while the V-8 SS model holds steady at 426 horsepower. All new for 2012 is the Camaro ZL1, which adds a supercharger, more dramatic styling, more aggressive handling, and a total of 580 horsepower.

The aggressive, pure muscle-car look of the 2012 Chevrolet Camaro doesn't come without its downsides, however. The low, sleek roofline means a shortage of headroom for taller drivers, and the high beltline makes it hard to see out of the car for shorter ones. The back seat is suitable only for children, and the trunk, despite the car's overall size, is diminutive. Ride quality, however, is very good overall despite the sporting overtones, and the cabin is quiet.

Beyond the look and the shortfalls in functionality and comfort, however, the 2012 Camaro is great at its main focus: performance. The base model, powered by the up-rated V-6, is pretty peppy, but the 6.2-liter V-8-powered SS model really brings the chassis to life, particularly when paired with the six-speed manual transmission. The automatic is no slouch, however, offering slick shifts and solid acceleration as well--all models of the 2012 Camaro SS hit 60 mph in about 4.5 seconds. The real star performer for 2012 is the ZL1, with 580 horsepower from a supercharged 6.2-liter V-8, magnetic ride suspension, and even more fearsome looks. Steering is direct, and the handling is crisp for a car of this weight class.

Even though performance is clearly given top billing with the 2012 Chevy Camaro, the common threads of all modern cars are still strong here: safety and convenience features abound. Six standard airbags, including side-curtain airbags that extend to the back seat, anti-lock brakes, dynamic stability control, and traction control are found in every new Camaro. Crash test ratings are solid, though perhaps not segment-leading: the NHTSA rates the Camaro at five stars for rollover protection, but due to changes in the way it tests front and side impact ratings, hasn't yet scored the 2012 model on other measures. The IIHS hasn't tested the Camaro.

Features are also ample, with OnStar navigation available; Bluetooth, USB, and iPod connectivity as options, and a new head-up display like the one found in the Corvette that debuted last year.

While the 2012 Chevrolet Camaro's styling won't suit everyone, for those that understand the muscle-car appeal, it makes a dramatic statement.

Retro-themed, yet filtered through a modern lens, the new Camaro's design hasn't changed much since its introduction just a few years ago, though the new ZL1 adds some serious aggression to match its raised performance.

All Camaros, whether V-6 or 580-horsepower ZL1, feature bold faces, strong flared fenders, and low canopies that combine to give a sporty, muscular stance. The tall, bluff front and rear overhangs give the Camaro a feeling of size and mass, but the low-slung bumpers and side skirts keep it looking sleek.

Inside, the 2012 Camaro's cabin is more retro-themed than the outside, with nods to the Camaros of the 1960s in the low-mounted console gauge cluster, vintage type face, and nested bezels. Despite the retro nods, the camaro isn't quite as bold as other sporty coupes in the same price range, like the Hyundai Genesis Coupe, or even the Ford Mustang.

The 2012 Chevrolet Camaro takes GM's retro revival muscle car to new heights, both in terms of outright performance and efficiency. With the introduction of the ZL1, the Camaro range now brushes up against supercar power figures, while the revised V-6 engine delivers an estimated 30 mpg.

Two transmissions are available, a six-speed manual and a six-speed automatic with TAPshift manual shift control. Automatic-equipped V-8 Camaro SS models are reigned in with a slightly modified engine design that's rated at 400 horsepower instead of the manual's 426. All models come standard with StabiliTrak electronic stability control and traction control. But what are the Camaros like on the road?

It's surprisingly nimble despite weighing as much as 3,800 pounds, thank in part to a well-tuned four-wheel independent suspension setup. Steering is fairly communicative, stable, and complements the Camaro's chassis. Power is never a shortcoming, even in V-6 models, though for real tire-smoking fun, the SS or ZL1 are necessary.

Though it's not the best environment for taller drivers, and there's no surplus of cargo space, the 2012 Chevy Camaro is comfortable, quiet, and generally well-built.

While the Camaro is a design homerun for many buyers, comfort and convenience may come up a bit short--particularly for taller occupants. The front seats, while very comfortable even on long trips, particularly in the SS model, don't leave much headroom for six-foot-plus adults, especially when the optional sunroof is equipped, lowering clearance from the already low roof. Entry and exit can also be tough due to the low roof.

The high beltline, on the other hand, hinders visibility for drivers of more normal height; all the more so for shorter drivers. Rearward visibility is compromised for all drivers with thick rear roof supports and a small rear window. The rear seats are small, and best suited to children.

Hard plastics and dull finishes aren't dominant in the Camaro's interior, but they are perhaps a bit more prominent than they should be, making the overall feel a bit dreary. SS models equipped with bright-color interior inserts help liven up the look, but the materials issues remain. Despite these complaints, everything appears to be well-assembled, with no squeaks, creaks, or rattles intruding on the experience.

Ride quality and cabin noise in general are also very good in the 2012 Camaro, with rough roads smoothed out and tire and wind noise kept to a minimum. The engines, on the other hand, are easily noticed, but that's probably how you'd want it.

The 2012 Chevrolet Camaro scores top marks in NHTSA crash tests in coupe form, and all models come with a strong set of standard safety equipment.

With a car that's capable of serious speed comes a sharper concern for safety, and the 2012 Camaro doesn't disappoint. Though the 2012 Convertible hasn't been rated by the NHTSA, the Coupe scores top marks of five stars in all categories of crash testing by the government. The IIHS hasn't rated the 2012 Camaro at all.

Backing up the Coupe's strong safety figures is a long list of standard safety features, including stability and traction control, eight standard airbags (including thorax, pelvic side-impact, and side-curtain airbags), anti-lock brakes, six months of OnStar with Automatic Crash Response, and a head-up display that puts navigation, speed, and more on the windshield to keep eyes on the road--and occupants out of trouble in the first place.

Used Chevrolet Camaro for sale near

The 2012 Chevrolet Camaro easily crosses the boundary between retro-themed muscle car and modern high-tech sports coupe with the addition of available options.

The 2012 Chevy Camaro offers a lot of performance for its price, but it also packs in quite a few standard features--and offers many more through available upgrade packages.

While the high-output V-8 SS and ZL1 models aren't going to win any awards for saving the planet (despite being efficient for their power ratings) the V-6 model does very respectably given the Camaro's sporty nature.

2 Reviews
5 star
4 star
100%
3 star
2 star
1 star
Rate and Review your car for The Car Connection! Tell us your own ratings for a vehicle you own. Rate your car on Performance, Safety, Features and more.
Write a Review
For 2012 Chevrolet Camaro

The Camaro is an easy car to love