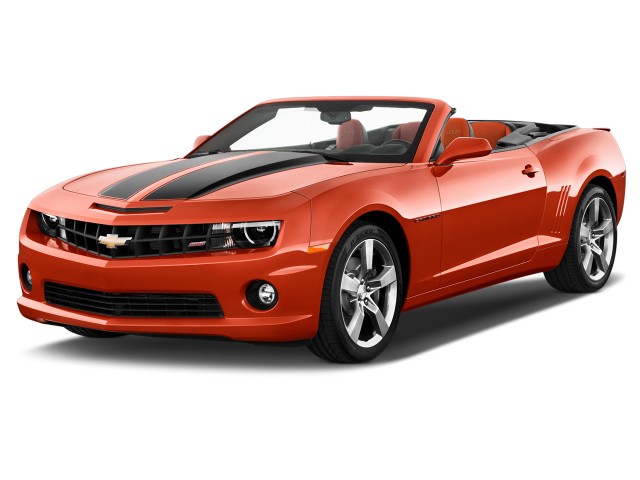 Keep in mind that headroom in the 2011 Chevrolet Camaro is so scarce that you might need to omit the sunroof.

The 2011 Chevy Camaro is a head-turner with scorching performance, especially in SS form. But the trade-off is a big drop in practicality and comfort.

The 2011 Chevrolet Camaro returns for its second model year with only a few minor changes. The high-shouldered, cartoonish exterior, scorching performance, and muscle-car attitude carry over with all the force of before.

Just as the muscle-car feeding frenzy (first stoked a few years ago by concept cars, then the introduction of the Dodge Challenger) might have subsided, Ford turned up the heat this year with new V-6 and V-8 engines, truly resurrecting a decades-old rivalry. And what better indication than after Ford revealed the 305-hp Mustang V-6, Chevrolet announced a new 312-hp rating for its base 3.6-liter V-6 in the Camaro.

The 2011 Camaro makes some extreme sacrifices inside in order to achieve an aggressive look. Space inside is tight, without much headroom for taller drivers, while shorter ones might feel claustrophobic from the high beltline; for just about everyone, visibility is severely compromised. There's a small backseat, but it's good for only two small children, and the trunk is quite tiny. On the other hand, ride quality is excellent, with a surprising lack of road noise.

The Camaro performs so well that you're likely to forgive some, or perhaps all, of the Camaro's functionality letdowns. The base V-6 provides brisk performance whether with the six-speed automatic or the six-speed manual, and it's good for a highway rating of 29 mpg. The 6.2-liter V-8 makes 426 hp with the six-speed manual (400 hp with the automatic), and in either case, the SS is a performance icon with tire-shredding power (and 0-60 in the 4.5-second range). Steering is crisp and direct, with a level of communication, and brakes across the line are good for triple-digit speeds.

Safety and convenience features aren't forgotten in the Camaro—even for the high-value base V-6 model. Six airbags are standard (four in front with side-curtain airbags that extend to the second row), as are anti-lock brakes, traction control, and dynamic stability control, and crash-test ratings have been good, if not segment-leading. Although a screen-based navigation system isn't available, an OnStar navigation feature is offered; Bluetooth, a USB plug, and an iPod adapter are also available. Newly optional for 2011 is a Head-Up display, like the one that's been available in the Corvette.

The 2011 Chevrolet Camaro sure won't appeal to everyone, but its retro-influenced, almost cartoonish exterior will seldom fail to turn heads.

While not as retro as the Dodge Challenger, the 2010 Chevrolet Camaro pairs some visual cues from older Camaros (namely the 1969 model) with a thoroughly modern design. Cues from past models include the vestigial vents ahead of the rear wheels and the hooded headlights.

At first look, compared to other coupes, the dash is high and the windshield pillars are wide, while the difference in height is quite dramatic from the very low front air dam to the rear decklid.

Inside, cues from the past (the twin-pod instrument cluster) blend with modern materials and decent build quality. The front buckets are roomy, but because the 2010 Chevy Camaro is a 2+2, space in the rear is snug, especially when the front seats are adjusted for taller occupants. However, compared to the Mustang or other budget-priced coupes, the interior of the Camaro is subdued and perhaps even dull, with a blocky design that doesn't complement the flamboyant exterior.

The Ford Mustang and Chevy Camaro have a rivalry that goes back decades, and with the all-new Camaro introduced last year, it's resulted in a new arms race. For 2011, the base direct-injected V-6 engine has been re-rated to 312 hp (GM says they were conservative before, but it lets them one-up the 2011 Mustang's 305-hp V-6). The 3.6-liter direct-injected V-6 used in base LS and LT versions of the 2011 Chevrolet Camaro LS and LT actually moves the Camaro quite quickly—fast enough for most tastes, if the Camaro's looks are your main motivator for buying.

But if it's the throbbing V-8 sound and heaps of low-RPM torque that you crave, either V-8 model will deliver—with 0-60 times in the four-second range and plenty of tire-smoking potential, on a closed course, of course. The V-8-powered Camaro SS is offered with two distinct engines that correspond to the driver's transmission choice. Both are 6.2-liter V-8s sourced from the Corvette. The L99 V-8 goes with the six-speed automatic, and it benefits from variable valve timing and active fuel management (that enables the engine to run in V-8 and V-4 modes). Horsepower and torque are 400/410, respectively. The LS3 6.2-liter V-8 is matched to the manually shifted six-speed Tremec TR6060. The LS3 puts out 426 horsepower and 420 pound-feet of torque.

Unlike the muscle cars of the past, the 2011 Camaro handles quite well, with immediate response, communicative steering, and very little roll. It's exceptionally agile and a bit less twitchy than the Mustang's live-axle setup on rough surfaces, even if Ford does manage to work wonders with it.

Provided you're not too tall and you don't have more than one passenger or big suitcases, the 2011 Chevrolet Camaro provides decent creature comforts.

The 2011 Chevrolet Camaro wins praise for its comfortable front seats, but there simply isn't enough space for taller drivers, let alone passengers. Those taller than six feet will likely want to check how much clearance they have on Camaros with and without the sunroof, and the tall beltline will leave shorter drivers feeling downright claustrophobic.

It's more challenging to try to fit normal-size adults in the backseat of the 2011 Camaro. There's a small, two-position backseat, but the low roofline and narrow opening make entry and exit tough.

Although shoppers aren't likely lining up for the Camaro with cargo space in mind, it's worth pointing out that the trunk really is quite small; you won't want to bring it out for Costco runs.

While the interior looks good from a few steps back, the abundance of hard plastics and dull finishes conspire to make the Camaro's interior seem a bit dull. The design, in some opinions, doesn't match the exterior so well either. However, it's all put together really well, with no creaks or rattles over several driving experiences and hard-used test cars.

Ride quality and cabin noise remain unexpected delights in the Camaro. Its suspension does a great job in absorbing rough pavement surfaces, and tight build quality, along with good insulation and isolation, helps keep out road and wind noise—though you do hear the engines.

There are plenty of measures in the 2011 Chevrolet Camaro to help protect drivers from the unexpected, as well as to keep occupants out of trouble in the first place.

Drivers of the 2011 Chevrolet Camaro might be a little more reckless—or, shall we say, exuberant—than your typical sedan driver, so it's good to see that GM hasn't skimped on the safety features. Six airbags are standard (four in front with side-curtain airbags that extend to the second row), as are anti-lock brakes, traction control, and dynamic stability control.

There are limited crash-test results available for the Camaro; the insurance-funded IIHS hasn't yet tested it, but the federal government has, giving it a modest four out of five stars in frontal protection but a commendable five stars in side protection. Because it's such a low, wide vehicle, it earns the federal five-star rollover rating.

Visibility, however, is a severe issue in the Camaro for all sizes of drivers. The arching roofline will get in the way of tall drivers, while shorter drivers will find it hard to see their way out at some angles due to the high beltline, which rises even higher near the back.

Conclusion: There are plenty of measures in the 2011 Chevrolet Camaro to help protect drivers from the unexpected, as well as to keep occupants out of trouble in the first place.

Used Chevrolet Camaro for sale near

Although the 2011 Chevrolet Camaro can function as a rather basic pony car, it has the potential to become a sophisticated, tech-savvy coupe.

The 2011 Chevrolet Camaro sure has the looks and performance to bring traffic into the dealership, but the wealth of standard and optional features will help seal the deal.

All 2011 Camaros are well equipped with air conditioning, power windows, a tilt/telescoping steering wheel, cruise control, a rear-window defroster, and a capable audio system with XM Satellite Radio compatibility. The three trim levels include increasingly more equipment: the base LS, the uplevel LT, and the V-8-powered SS. The RS option group can be added to the LT or SS models, and it gives the Camaro a more aggressive look with HID headlamps and "halo" rings, a rear spoiler, unique taillamps, and 20-inch aluminum wheels.

If you want to load up an SS, the bottom-line price, should you choose items like heated leather seats, a moonroof, and one of many customization and wheel options, can approach the $45,000 mark.

Among the few disappointments is the lack of a screen-based nav system, and Bluetooth connectivity isn't standard; Bluetooth comes with a USB port and iPod controls in a so-called Connectivity Package. Among the most intriguing options is a nine-speaker Boston Acoustics sound system.

For 2011, a new Synergy Green color joins the palette, and a Head-Up display—like what's been offered in the Corvette for a number of years—is now also available in the Camaro.

While the 2011 Chevrolet Cruze has impressive highway fuel economy, its city mileage is about on par with that of other high-power coupes.

Based on its combined fuel economy ratings, the 2011 Chevrolet Camaro isn't the most fuel-efficient in its class (the 2011 Ford Mustang achieves 31 mpg highway), but it isn't the thirstiest either.

The V-6 model's highway rating of 29 mpg rivals some four-cylinder cars, while its city mpg of 17 or 18 mpg is respectable. The Camaro SS engines are rated at 16 mpg city and 24 or 25 mpg highway.

1 Review
5 star
100%
4 star
3 star
2 star
1 star
Rate and Review your car for The Car Connection! Tell us your own ratings for a vehicle you own. Rate your car on Performance, Safety, Features and more.
Write a Review
2011 Chevrolet Camaro 2-Door Coupe 2SS

BadAss turns heads every where I go

Love the new body style and performance of the Camaro SS
people found this helpful.
Was this review helpful to you? Yes
USED PRICE RANGE
$10,994 - $46,555
Browse Used Listings
in your area
7.8
Overall
Expert Rating
Rating breakdown on a scale of 1 to 10?
Compare the 2011 Chevrolet Camaro against the competition
Compare All Cars
Looking for a different year of the Chevrolet Camaro?
Read reviews & get prices
Related Used Listings
Browse used listings in your area