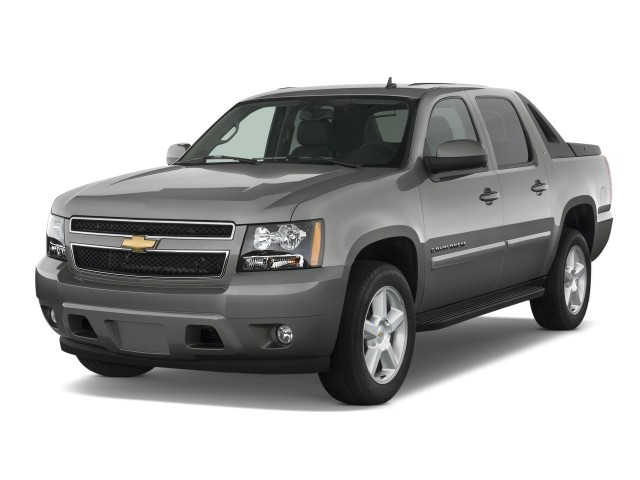 Mind your engine order codes if you're worried about fuel costs. Some early-production versions of the 2009 Chevrolet Avalanche were equipped with a different 5.3-liter V-8, making 310 horsepower and order-coded LC9. This engine does not have the Active Fuel Management feature that the other 5.3-liter engine coded LMG does, and it gets fuel economy ratings that are 3-4 mpg lower.

By offering the best of both worlds, the 2009 Chevrolet Avalanche makes choosing between a truck and an SUV a heck of a lot easier.

TheCarConnection.com has driven the 2009 Chevrolet Avalanche and researched relevant, available road tests to provide you an expert and conclusive review for truck shoppers.

Since its introduction in 2002, Chevrolet's Avalanche has won over consumers with its ability to adapt. As an SUV with the midgate closed and the rear seat up, the Avalanche can comfortably transport six people, and as a truck with the midgate folded, the Avalanche's truck bed grows in length from 5'3" to 8'2". The Avalanche is, without a doubt, the most flexible SUV on the market.

Based on the Chevrolet Suburban and sharing many common parts as well as the same wheelbase dimensions—and very closely related to the Cadillac Escalade EXT—the unique SUV/truck hybrid is defined by its configurable midgate and the one trick it performs. Like the rest of GM's light-duty pickups, the Avalanche was comprehensively retooled for the 2007 model year, and it's seen only minor changes since then.

A new transmission is the biggest news for the 2009 Chevrolet Avalanche this year; replacing the old four-speed transmission is a new six-speed Hydra-Matic 6L80 automatic transmission. The new transmission improves fuel economy because the two additional gears allow the engine to operate at lower revs when traveling at freeway speeds. The lower engine speed also contributes to reduced engine noise.

The 2008 Chevrolet Avalanche is available in LS, LT, and LTZ trims and with either rear- or-four-wheel drive. The standard engine is a 320-horsepower 5.3-liter V-8 with Active Fuel Management, which deactivates half of the engine's cylinders when cruising or coasting. A 366-horsepower 6.0-liter V-8 is available and also boasts a system to reduce fuel consumption. But the 6.0-liter engine still brings a significant fuel-economy penalty; the 5.3-liter has ratings of up to 14 mpg city, 20 highway; the 6.0-liter drops to 12 mpg city, 17 highway.

The 2009 Chevrolet Avalanche shares its interior with the Chevy Silverado pickup and Tahoe SUV, and experts at TheCarConnection.com like these trucks. Their comfort and controls are first-rate and simple to use. If you haven't been in this newest generation of GM's light-duty trucks, you owe them a look. An odd smattering of cheap plastic pieces excepted, you'll find little about which to gripe. Seats are generously proportioned in front especially, and the second row offers plenty of space for adults. Some drivers will smartly opt for the optional rearview camera, which is recommend as rearward vision can be obscured.

The Avalanche offers more technology features than most buyers might expect, which is the case with GM's entire line of full-size trucks. Rear park assist, DVD navigation, and a rear-seat DVD entertainment system with an eight-inch screen are all on the options list, and the 2009 Chevrolet Avalanche includes Bluetooth wireless phone connectivity with steering-wheel controls.

The Avalanche comes with most of the safety features that buyers look for, including head-curtain side airbags, anti-lock brakes, and StabiliTrak electronic stability. For more reassurance, the Avalanche earns a top five-star ratings in federal frontal and side impact crash tests. There's also an optional integrated brake controller system, which provides immediate and measured brake force signaling to electric-controlled trailer brake systems.

Hard-core Avalanche users in the back country will want to go for the heavy-duty Z71 Off-Road package, which features larger recovery hook openings; larger, more prominent fog lamps; and specific grille texture and platinum chrome grille trim. Also, those with bigger budgets will want to take a look at the top-of-the-line LTZ, which packs on the enhancements to a level that's comparable with GMC's Denali models, bringing a Centerpoint Surround Sound Bose speaker system, heated and cooled 12-way power memory seats with perforated leather-trimmed seating surfaces, and a dressed-up appearance.

Inside the unique exterior styling of the 2009 Chevrolet Avalanche lurks an upscale interior.

Cadillac builds a similar vehicle to the 2009 Chevrolet Avalanche (the Escalade EXT), but the Avalanche is the original transformer and it keeps getting better. Turning it from a short-bed pickup to a sort of long-bed with a partial roof covering is a simple process of flipping down its midgate to extend its pickup bed inside the cabin.

Reviewers generally like the interior of the 2009 Chevrolet Avalanche, but not all are that descriptive as to why. ForbesAutos simply reports the 2009 Chevy Avalanche's "nice two-tone interior is crafted from high-quality materials," and Car and Driver pays a halfhearted compliment to the "decent interior." Cars.com is more specific, noting the 2009 Chevrolet Avalanche takes "interior styling cues [that] echo the Tahoe and Suburban, with a curvaceous dashboard." They add, "Gone are the boxy dashboard and chintzy controls from the previous version, replaced by a carlike environment that's far beyond GM's previous interiors—and even beyond the current Toyota Sequoia, for that matter."

The 2009 Chevrolet Avalanche performs well, with great towing capability, but it still drives like the large truck that it is.

The fuel efficiency of the 2009 Chevrolet Avalanche could be better, but it does combine a significant amount of power with agile handling.

In terms of handling, Kelley Blue Book quips Avalanche's bulk makes piloting it through crowded urban areas no picnic, though it's more maneuverable than some would expect. Edmunds observes that while "the Avalanche is certainly no sports car around corners, it deals with them in a competent, predictable manner while delivering a quiet and comfortably controlled ride on the highway." The 2009 Chevrolet Avalanche handles well because of a "revised suspension [that] provides a comfortable ride and more precise handling," according to ForbesAutos, allowing that the truck "may be too large for some motorists (or garages) to handle." Car and Driver acknowledges that the Avalanche is "big and hard to maneuver, [but] for a monster truck, the Avalanche drives pretty well, with good steering and brake-pedal feel."

ConsumerGuide says that "acceleration with the 5.3-liter V8 is good around town," but remarks that the 2009 Chevy Avalanche has only "adequate highway passing power." Cars.com says, "The 5.3-liter V-8 produces adequate acceleration around town, and it's whisper-quiet." Car and Driver calls the Avalanche "not quick." Edmunds begs to differ, however: "despite its considerable size and heft, the 2009 Chevy Avalanche is relatively quick, even when equipped with the standard 5.3-liter V-8." Edmunds acknowledges, "acceleration and fuel economy begin to suffer when the truck is loaded down with passengers or cargo." Towing power is impressive, rated at well over four tons. The available 6.0-liter, 366-horsepower V-8 also shuts off cylinders under low engine loads to reduce fuel consumption.

As mentioned, the 2009 Chevy Avalanche isn't the most fuel-efficient SUV and Cars.com points the Chevy is far from frugal. During EPA testing, the 5.3-liter V-8 achieved 14 mpg city, 20 mpg highway, while the 6.0-liter V-8 saw those numbers dip to 12 and 17 mpg, respectively.

The 2009 Chevrolet Avalanche offers comfort for up to six and has impressive interior quality.

Because of its midgate, the 2009 Chevrolet Avalanche provides a fair amount of versatility, and despite a limited bed, there's ample storage space.

Kelley Blue Book notes, "true pickup-truck fans might shun the Avalanche's relatively short cargo bed and SUV foundation, but the midgate gives it a degree of versatility that's absent from traditional pickups." Car and Driver raves about "cargo flexibility" in the 2009 Chevrolet Avalanche, noting "this truck has GM's innovative midgate feature, which allows pass-through capability between the cargo box and the cabin, vastly increasing versatility."

Cars.com says the 2009 Chevrolet Avalanche's rear seats "can fold to extend the cargo bed, but once the midgate is down there is no partition separating the driver and front passenger from the elements." They also report the "Avalanche's bed measures 5.3 feet long and has 45.5 cubic feet of volume—roughly equal to a four-door Dodge Dakota Club Cab." Car and Driver comments that there's "not much people space" inside the 2009 Chevy Avalanche. Cars.com states "two rows provide seats for up to six occupants," however. Edmunds reports the "more common front bucket-seat arrangement seats five, but the [2009 Chevy] Avalanche can accommodate up to six occupants when equipped with the split-bench front seat."

ConsumerGuide says the 2009 Chevy Avalanche is "trimmed mostly with hard plastic, but many surfaces are textured, lending an upscale appearance," and notes "gauges are large and easy to read...the climate controls are mounted slightly low but are no trouble to reach." According to Edmunds, the interior is "constructed of high-quality materials, the cabin features straightforward ergonomics and top-notch fit and finish."

ConsumerGuide also reports that while there is "noticeable highway-speed wind rush and tire rumble...bump noise is well-suppressed, [and] engine whine intrudes only in rapid acceleration." They assert that "the Avalanche rides surprisingly well for a large pickup truck. It betrays its design with only mild bounding over large bumps."

The 2009 Chevrolet Avalanche performs exceptionally well in crash tests, but it has some visibility issues.

In addition to its great safety scores, the 2009 Chevrolet Avalanche carries a long list of standard safety features.

The Insurance Institute for Highway Safety (IIHS) has not performed tests on the 2009 Avalanche, but the National Highway Traffic Safety Administration (NHTSA) awarded the Avalanche five out of five stars for front and side-impact protection. It did not do as well, receiving only three stars, in rollover resistance tests, though that can be expected for a rather tall truck.

According to Edmunds, the Chevrolet Avalanche 2009's "rollover mitigation feature senses impending rollovers and can apply individual brakes in an attempt to stop them." In addition, the 2009 Chevy Avalanche is equipped with "GM's OnStar emergency communications system." Cars.com reports that "curtain airbags are now standard," as well as "all-disc antilock brakes and an electronic stability system with rollover mitigation."

Used Chevrolet Avalanche for sale near

In addition to its cargo-versatility features, the 2009 Chevrolet Avalanche comes well equipped with the features luxury SUV buyers like.

Depending on how much you're willing to spend, you can accessorize the 2009 Chevrolet Avalanche nicely.

In addition to the innovative midgate setup, which allows you to expand the pickup bed into the cabin when needed, the bed itself has some features worth mentioning. "The bed offers a non-slip mat that even held bags of ice in place. Each rear fender incorporates a lockable compartment, accessible from the top," Cars.com reports. "A three-piece cargo cover is standard, though it's difficult to remove and even harder to stow."

According to Edmunds, "there are two main trim levels; LS and LT, plus a premium line-topping LTZ package." Cars.com reports that "three trim levels are available: base LS, LT and top-of-the-line LTZ," and notes "all Avalanches come well-equipped with power windows, power door locks and keyless entry, as well as a power driver's seat and steering-wheel audio controls."

The Cars.com reviewer mentions such options as a navigation system, rear-seat DVD entertainment system, and heated seats. TheCarConnection.com notes that other highlights of the options list include power-adjustable pedals, a remote start system, and Ultrasonic Rear Parking Assist.

Be the first one to write a review on 2009 Chevrolet Avalanche
Rate and Review your car for The Car Connection! Tell us your own ratings for a vehicle you own. Rate your car on Performance, Safety, Features and more.
Write a Review
USED PRICE RANGE
$6,444 - $17,999
Browse Used Listings
in your area
8.0
Overall
Expert Rating
Rating breakdown on a scale of 1 to 10?
Compare the 2009 Chevrolet Avalanche against the competition
Looking for a different year of the Chevrolet Avalanche?
Read reviews & get prices
Related Used Listings
Browse used listings in your area