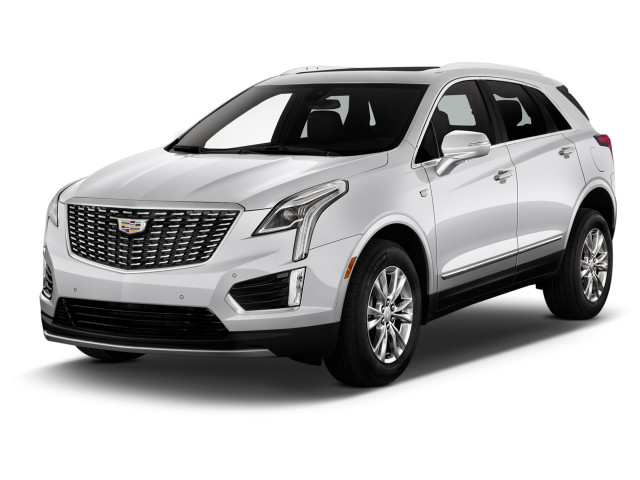 The XT5’s value equation slips considerably the more you spend. Stick with the base Luxury trim.

The 2021 Cadillac XT5 is a comfortable SUV, but competitors offer more personality and refinement.

What kind of vehicle is the 2021 Cadillac XT5? What does it compare to?

The 2021 Cadillac XT5 is a compact luxury crossover SUV. Shop it against some big-name Germans such as the BMW X3 and Audi Q5, plus the Lincoln Nautilus and Lexus RX.

The XT5 is an attractive offering with good power and a high-tech interior, yet it leaves us wanting more engaging road manners. That’s something we can’t say about Cadillac’s sedans, but it’s enough to hold the XT5 to a relatively modest 6.3 out of 10. (Read more about how we rate cars.)

Updates this year to the infotainment system include wireless Apple CarPlay and Android Auto compatibility, plus Amazon Alexa compatibility and a number of hardware changes for better screens, cameras, and USB-C charging. Night vision is a new option.

The XT5 is relatively conservative in its design, following in the tire tracks of the old Cadillac SRX. It’s sized somewhere between BMW’s X3 and X5, and priced right in the middle, too. A relatively bland dash puts controls up high, and this year’s infotainment updates put it on par with the segment’s best.

Underhood, look for a choice of a 237-hp 2.0-liter turbo-4 or a 310-horsepower 3.6-liter V-6. Power gets sent to the front or all four wheels through 9-speed automatic transmissions. We’ve spent far more time behind the wheel of the V-6, which is refined and peppy, but lacking the turbo thrust we’ve come to expect from competitors. Most versions ride comfortably, and those in Sport guise can be a little firm but never truly entertaining. Fuel economy is not great in the low-20 mpg range.

The XT5 has decent interior space, but top versions don’t match the level of pampering you’ll find in rivals. Then again, the XT5 is generally less expensive given the space it provides, so that may be a worthwhile tradeoff.

The XT5 comes with basic crash-avoidance tech, though more sophisticated gear is optional. Cadillac’s trick Super Cruise advanced system is not yet offered on the XT5, though it could appear as early as next year.

The XT5 range begins at around $45,000, plus $2,000 for all-wheel drive. That money buys the reasonably well-equipped Luxury trim, and, frankly, it’s where we think the best value lies. You’ll still pay extra for any color other than silver, but this is a fair amount of SUV for that money.

Though hardly a double-take kind of crossover, the Cadillac XT5 is pleasant enough.

The 2021 Cadillac XT5 is staid and conservative, but that’s not necessarily a bad thing. We toss a point its way for its interior, which pushes it to 6 out of 10 on the TCC scale.

Outside, busy lines and a hunchback profile mostly work well, but its lines will draw less attention than rivals from Volvo, Alfa Romeo, and even Lincoln. Sport versions look a little dressier, but they ride stiffly with their bigger wheels and, frankly, we think they miss the point.

Inside, the dash puts a big 8.0-inch touchscreen up high, and it’s flanked by nice trim finishes on higher-end versions. Base cars are a little drab with synthetic leather inside and more plastic trim, but their lower prices are more palatable.

Is the Cadillac XT5 4WD?

How fast is the Cadillac XT5?

The XT5 offers two engines: a strong V-6 and a turbo-4 that deliver good, if not thrilling, power. We rate the range at 6 out of 10 based on our time behind the wheel of the V-6; we’ll update this space when we know more about the base turbo-4.

The 2.0-liter turbo-4 puts out 237 horsepower and spins the wheels through a 9-speed automatic transmission. This familiar engine is put to good use in a host of General Motors products, and while the 4,000-pound XT5 is among the heavier vehicles using the turbo-4, it should be up to the task.

Optional on Premium Luxury and standard on Sport (which comes only with all-wheel drive), the 3.6-liter V-6 has also been around GM’s stable for a while. It puts 310 hp and 271 lb-ft of torque to the ground through a 9-speed automatic, which can occasionally be reluctant to downshift during hard passing but is otherwise docile enough.

Most XT5s ride nicely on standard 18-inch or available 19-inch wheels. Sport versions toss in adaptive dampers that quell some of the stiffness from the standard 20-inch wheels, but don’t look for sporty handling. The XT5 pushes into corners and has plenty of body roll. Stick to the highway instead of the curvy back road.

A hushed interior and good space help elevate the XT5 to a 7 out of 10 for its quality.

Base versions have synthetic leather on the power-adjustable front seats and rear seats, while real hides come on the Premium Luxury and Sport trims. The front seats are comfy and come standard with heaters, a nice and toasty touch.

Rear-seat riders have decent space, though three abreast may be a bit cozy. Conveniently, row two can be shifted forward to open up more cargo room. Maximum capacity stands at 63 cubic feet with the rear seats folded down, which is a bit low for a vehicle this size but is certainly usable.

Interior trim is nice no matter what you spend, though Premium Luxury models can be dressed up with nicer semi-aniline leather and gorgeous open-pore wood trim that inexplicably extends to the steering wheel hub.

How safe is the Cadillac XT5?

The 2021 Cadillac XT5 rates 7 out of 10 for its safety thanks to a five-star rating from the NHTSA and standard automatic emergency braking.

So-so headlights prevent the crossover from earning the top safety award from the IIHS, however.

New Cadillac XT5 for sale near

The 2021 Cadillac XT5 is well-equipped, though it can get awfully expensive when fully-loaded.

The 2021 XT5 rates 8 out of 10 thanks to good standard fare including a quality infotainment system, basic safety gear, and a 4-year/50,000-mile warranty.

Which Cadillac XT5 should I buy?

The XT5 makes more sense the less you spend. Base Luxury versions live up to their name, mostly, at around $45,000—or $2,000 more with all-wheel drive. Cadillac charges extra for all but one paint color, silver, and the best options aren’t unlocked until you spend another $5,000 for Premium Luxury trim.

That trim comes with leather upholstery and a big moonroof. Adaptive cruise control requires spending nearly $4,000 more in options, though the digital instrument cluster and rearview mirror may be worth it for tech-centric shoppers.

Add the Platinum package and a few other items and your Cadillac dealer will present you with a bill around $67,000. The good news is that the XT5 is often discounted.

The 2021 Cadillac XT5 is remarkably thirsty.

Not really. The most frugal XT5 is the most basic: the front-wheel-drive turbo-4, which gets an EPA-rated 22 mpg city, 29 highway, 24 combined. That’s good for a middling 4 on our scale.

All-wheel drive nicks an mpg or two off those figures.

The V-6 is thirstier yet, averaging just 21 mpg combined regardless of drive wheels.

One thing to note: The turbo-4 runs on costlier premium fuel versus the regular unleaded Cadillac says the V-6 should drink. As a result, the V-6 may cost as much as $300 less per year for a typical driver to fill up with fuel.

Be the first one to write a review on 2021 Cadillac XT5
Rate and Review your car for The Car Connection! Tell us your own ratings for a vehicle you own. Rate your car on Performance, Safety, Features and more.
Write a Review
$43,995
MSRP based on FWD 4-Door Luxury
Change Style

Drivetrain
Other
See Your Price For 2022
6.3
Overall
Expert Rating
Rating breakdown on a scale of 1 to 10?
Compare the 2021 Cadillac XT5 against the competition
Compare All Cars
Looking for a different year of the Cadillac XT5?
Read reviews & get prices
Related Used Listings
Browse used listings in your area
See More Used
The Car Connection Daily Headlines