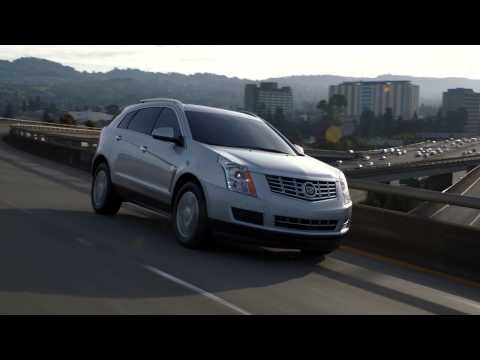 CUE can be challenging and quite useful; spend some time with it in the showroom before you commit to a few years of battling it to do your bidding.

The 2016 Cadillac SRX smooths out the road ahead with a luxurious ride, smooth V-6 power, and the mixed blessing of touchscreen controls.

The 2016 Cadillac SRX carries over unchanged for the 2016 model year, with the XT5 replacing the nameplate for model year 2017.

The SRX is GM's luxury five-seat crossover SUV. It's a counterpart to the big, truck-based Escalade, but they're as different as they can be when it comes to capability and road manners. The Escalade is all about blingy bluster, and for some, heavy-duty work--the SRX is geared to toting four or five adults around town, through whatever weather comes its way.

The SRX tucks a conventional crossover-SUV shape under Cadillac's usual array of stark angles and sculpted curves. It's the oldest model in the Cadillac lineup, but still looks fresh and tasteful--especially in light of what we've seen of its upcoming replacement, the XT5. The Art &amp; Science styling theme is more muted here than on past Cadillacs, but the SRX is still an edgy outlier when compared with vehicles like the Audi Q5, BMW X3, even the new Mercedes-Benz GLC-Class--which Cadillac considers to be rivals for the SRX.

Inside, the SRX's cabin is a contemporary, classy blend of big touchscreen interfaces and handsome, traditional details like stitched leather trim.

The SRX comes in a single powertrain configuration, with a choice of all-wheel drive overriding standard front-wheel drive. Power comes from a 308-horsepower, 3.6-liter V-6 engine, coupled to a 6-speed automatic transmission. Acceleration is respectable--0-60 mph happens in the seven-second range--but the SRX doesn't feel so light on its feel. That comes down to the transmission's tall gearing but, even more so, the SRX's substantial heft: it weighs in at more than 4,500 pounds.

Of all the Cadillac offerings, the SRX puts the best foot forward in versatility. The two rows of seats can seat up to five passengers, without the immense bulk of an Escalade. The seats themselves are tailored well, and the cabin is quieted with active noise cancellation technology.

The SRX still takes some top honors in safety, getting good marks from the IIHS as well as five stars from the NHTSA. Adaptive cruise control and forward-collision warnings are on the features list.

The SRX has one of the most advanced intofainment systems on the market with CUE, but it's as fussy to engage as some other systems. It uses a proximity-sensitive touchscreen to run navigation, phone, and audio systems--and it can be touchy and at the same time, slow to respond. OnStar comes with each SRX, and a subscription to 4G LTE data can spread a wireless hotspot to 8 devices inside the car.

The SRX's shape isn't what we'd call seductive, but the cockpit is subtle and refined.

It doesn't have the long-nose, rear-biased proportions of the brand's distinctive sedans, and dials back on the bling heaped on the big Escalade. The Cadillac SRX simply does a good job of cloaking a conventional two-box crossover SUV body in lots of sculpted crests and clever angles.

The SRX's chiseled looks set it apart from many of its rivals. It sports Cadillac's vertically stacked headlights, a brightly chromed grille, and relatively short front and rear overhangs, for a shape that's powerful without taking on any overt SUV cues.

Our favorite detail is the deep line etched down the sides of the SRX, from its nose to its taillights. The taillights themselves stand proud from the vehicle, and almost resemble classic Cadillac fins. The SRX also has a rear spoiler for better aerodynamics, big 20-inch wheels on some models, and illuminated door sills.

The SRX's interior is illuminated by touchscreens, letting them grab all the attention while other surfaces are muted. The cabin was revamped in 2013, when it received the brand's CUE interface and its large capacitive touchscreen, proximity sensing and slider controls. Combine that with the hand-cut-and-sewn coverings on the instrument panel and ambient lighting and you have an environment that's not only richly appointed, but also tech-forward.

Handling isn't as sharp as it could be, but the Cadillac SRX has a silky, strong V-6 for respectable acceleration.

The 2016 Cadillac SRX never feels lazy, thanks to its 308-horsepower V-6, but it's not all that inspiring or quick.

The SRX's powertrain always feels refined. It settles into an almost imperceptible purr at idle, then revs with a silky tenor, and none of the intake gurgle and whoosh of GM V-6s of the not-so-distant past.

Where does the fizz go? Part of the problem is that the SRX is geared quite tall, but the other issue is sheer weight. The 3.6-liter V-6 makes its peak torque at 2,400 rpm, so it's a relaxed combination, but even with the responsive 6-speed automatic transmission the SRX just isn't that quick on its feet when a quick burst of power is needed.

That said, in all-out acceleration, the SRX will make it to 60 mph in a respectable seven seconds--in the same ballpark as the Acura MDX, Lincoln MKX, or even the Lexus RX 350.

The SRX is offered with front- or all-wheel drive. All-wheel-drive models use a Haldex system with electronic limited-slip differential; the latter is a great choice for snowy climates and bad weather.

Sprightly and nimble are again not terms that really apply to the way the SRX handles. It feels heavier than you might expect if you pitch it hard into a corner. It's a bit disconcerting in that its center of mass feels higher (because of your seating height) even if it isn't. But the hydraulic-assist power steering is weighted nicely, and unwinds as predictably as in most sport sedans.

Larger wheels usually tend to make the ride worse, and they don't always improve handling; but the 20-inch wheels are fine here. We recommend the optional FE3 suspension, with an active suspension and Continuous Damping Control, which reads the road and other inputs, adjusting every two milliseconds.

With either of the suspension setups, ride quality isn't pillowy soft, but it's tight enough for crisp handling without being too jarring. Your passengers will be happy, and this is actually a decent vehicle for Realtors or others who want to impress clients but not be too over-the-top.

One final criticism is that the brakes tend to feel spongier than we’d like, and the impression is cemented with significant nosedive.

It's officially rated to carry up to 5 people, but we think of the Cadillac SRX as one of the better ways for two adult couples to hit the town in comfort. The interior is nicely detailed, roomy, and lavishly appointed.

The SRX cabin is a very quiet, comfortable place for the commute or a long road trip. There's no third row wedged in behind the SRX's rear seat, which is really for the better. In front, the SRX's space is ample and trimmed out very well. The seats have good contouring, extendable thigh bolsters, and sit at a height that should put most adults at an ideal driving position.

In the back seat, passenger space can seem tight, but the moonroof opens up the area to lots of light. The seats in the second row are shaped for long-distance comfort. The SRX doesn't have the sliding second-row seat you'd find in the Chevy Equinox and GMC Terrain, even though they're distant relatives.

We find the SRX as useful as any of its luxury crossover SUV rivals. The tailgate has power assistance, Cadillac offers cargo-area tiedowns, and the rear seats fold down nearly flat to open a sizable cargo space.

The SRX's cabin feels luxurious and well-trimmed. It has a sense of solidity, and noise levels are kept low by active noise cancellation, which listens in via a microphone and sends opposing signals that cancel out harsh frequencies.

Great crash-test scores give the SRX a lofty safety rating.

The Cadillac SRX earns very good crash-test scores, and has some of GM's latest safety technology.

The NHTSA gives the SRX an overall rating of five stars, with a mix of four- and five-star ratings in individual tests. The IIHS, meanwhile, gives it "Good" scores on all completed tests, and for its collision-prevention hardware, but since it hasn't been subjected to the new small-overlap crash test it hasn't been named a Top Safety Pick. OnStar is standard, and adaptive headlights are an option.

Outward vision should be a concern when you're test-driving the SRX. The rearview camera and parking sensors help somewhat, but the view to the back is compromised by thick roof pillars.

Used Cadillac SRX for sale near

The SRX has all the luxury touches on its features list, but CUE could use some more work.

The Cadillac SRX has some of the more advanced technology features found in luxury crossover SUVs--some of which we like and would spend our own money on, and some we wish would go through another round of polishing.

All SRXs come with a great set of standard features, including power windows, locks, and mirrors; cruise control; automatic climate control; steering-wheel audio controls; keyless entry; Bluetooth with audio streaming; and an AM/FM/XM/CD audio system with USB port. There's also navigation provided by OnStar that comes with a short-term free subscription, which can be continued for a monthly fee.

High-speed data arrived in the SRX last year, and it can broadcast a wireless hotspot around the car and connect up to 8 devices. The SRX also has adopted CUE, the touchscreen interface that controls navigation, phone, and audio systems with swipe and pinch commands as well as voice and steering-wheel controls. Bluetooth audio streaming and HD radio also are standard.

We've had our issues with CUE in several models--glitchy navigation that drops destinations without warning, and overly sensitive haptics that register commands when we're just resting a hand nearby. Since it responds in the touch-sensitive ways smartphones and tablets do, it's a little less confusing to learn than some roller-controller and voice-activated systems--but it comes with some unique fail modes all its own. Be prepared to spend an hour or two learning its benefits and downfalls.

Fuel economy ratings are below average in the Cadillac SRX.

Without a major powertrain upgrade or greener alternatives since it was launched, the current Cadillac SRX doesn't earn very good gas mileage.

In context, the SRX's ratings fall below vehicles such as the BMW X3 and Audi Q5. Though they have turbo-four engines instead of a larger-displacement V-6, performance is similar. Even GM's big SUVs, like the Chevy Tahoe, earn combined ratings in the high teens, thanks to more advanced transmissions and cylinder-deactivation technology.

2 Reviews
5 star
4 star
50%
3 star
50%
2 star
1 star
Rate and Review your car for The Car Connection! Tell us your own ratings for a vehicle you own. Rate your car on Performance, Safety, Features and more.
Write a Review
2016 Cadillac SRX FWD 4-Door Performance Collection

Beautiful to look at but poor build and component quality

Would have excepted more from cadillac

Heated seats not very warm, poor headlights, so so mileage.
people found this helpful.
Was this review helpful to you? Yes
USED PRICE RANGE
$12,699 - $28,995
Browse Used Listings
in your area
7.8
Overall
Expert Rating
Rating breakdown on a scale of 1 to 10?
Compare the 2016 Cadillac SRX against the competition
Compare All Cars
Looking for a different year of the Cadillac SRX?
Read reviews & get prices
Related Used Listings
Browse used listings in your area
See More Used