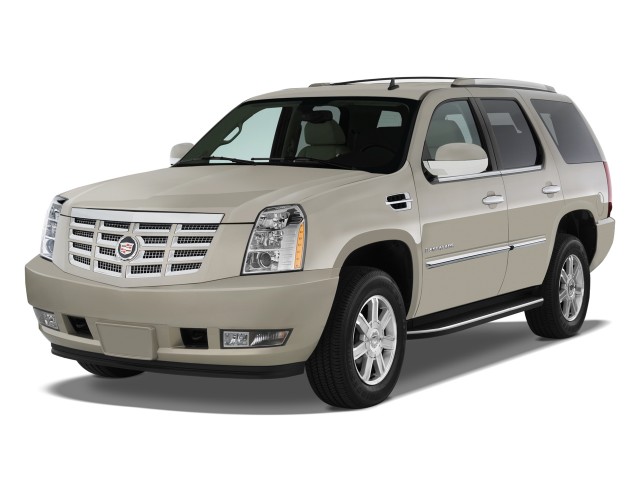 If you think the 2014 Escalade is too thirsty, you might want to look for a 2013 Escalade Hybrid models that still might be on the lot. If you otherwise like the Escalade's true-truck capability and bold look, the Hybrid preserves much of that--but with EPA ratings of 20 mpg city, 23 highway.

The 2014 Cadillac Escalade remains one of the brawniest, most luxurious large SUVs, although some shoppers will be left wanting more modern interfaces inside.

Whether you call it high-end executive transport, a way to arrive and be noticed, or a symbol of excess, the 2014 Cadillac Escalade seldom fails to make a bold impression.

For 2014, the Escalade sidestepped away from its only piece of gleeful green irony in the lineup: the Escalade Hybrid, and its better than 50-percent improvement in city fuel economy. That model has been purged, bringing us back to that first impression, of conspicuous consumption. But with an all-new 2015 Cadillac Escalade waiting in the wings, some of the most image-conscious might want to wait a few more months.

In any case, the Escalade has become an American luxury icon; and love it or not, it's easy to see why, as the Escalade is way quicker and more responsive than you'd expect for such a big, heavy vehicle, with an interior that feels lavish, even though it might be missing some of the latest tech wizardry.

The Escalade EXT--the Escalade of pickups, essentially--didn't make it to the 2014 model year either, leaving two different body styles and just one powertrain. The extended-length (ESV) variant provides a 21-inch increase in size with seating capacity for up to eight adults.

Thanks to a strong, responsive powertrain and somewhat athletic chassis tuning, you can almost forget that the 2014 Cadillac Escalade is one of the biggest, heaviest luxury SUVs--and one with truck roots, at that. With a rumbly muscle-car exhaust note, the huge 6.2-liter V-8 makes 403 horsepower and 417 pound-feet of torque, and it can propel this big ute to 60 mph in only about 6.5 seconds, even though it weighs almost 6,000 pounds. An abundance of low-end torque (great for towing) is key to that, along with a six-speed automatic transmission that performs as a willing companion.

The Escalade's huge, imposing exterior does pay off inside, with a comfortable cabin that's both luxury-car plush and reasonably quiet. The only potentially very significant caution is that this is not an interior that's easy to reconfigure; think twice if cargo versatility and neat-folding seats rank high on your list of priorities. Ride quality on the other hand is excellent, and even with the huge 22-inch wheels that many Escalades come with, GM chassis engineers have managed to give this huge SUV a surprisingly responsive driving character thanks to Magnetic Ride Control--an option we strongly recommend. As for parking, well, don't expect to perform any magic.

The full battery of crash tests haven't been conducted on the Escalade for many model years, and its traditional body-on-frame layout dates back to the 2007 model year. But it carries over five-star federal ratings for frontal and side tests--as well as a lot of mass.

What you get in the Escalade no matter what is a full-fledged luxury vehicle; it's just a matter of how exclusive you want it to feel. In its base-model guise, the Escalade caters to executives and VIPs who need a 'Slade in their stable, and the interior can reach a limo-like level of equipment that can focus toward either work or play. The Platinum is the way to go for those who want a more expressive look. It adds unique chromed 22-inchers, special Tehama anilene leather, heated and cooled cupholders, LED headlamps, a leather-trimmed instrument panel, and many other appearance and trim upgrades.

Other features worth note individually include an eight-inch touch-screen navigation system with real-time traffic, a Bose 5.1 Digital Surround Sound system, cooled front seats, and power-actuated running boards. But beware, the navigation system in the Escalade is some years behind the curve--especially if you stroll across the showroom and see the CUE interface that's now offered in most other Cadillac models.

Be the first one to write a review on 2014 Cadillac Escalade
Rate and Review your car for The Car Connection! Tell us your own ratings for a vehicle you own. Rate your car on Performance, Safety, Features and more.
Write a Review
Browse Used Listings
in your area
8.4
Overall
Expert Rating
Rating breakdown on a scale of 1 to 10?
Compare the 2014 Cadillac Escalade against the competition
Compare All Cars
Looking for a different year of the Cadillac Escalade?
Read reviews & get prices
Related Used Listings
Browse used listings in your area