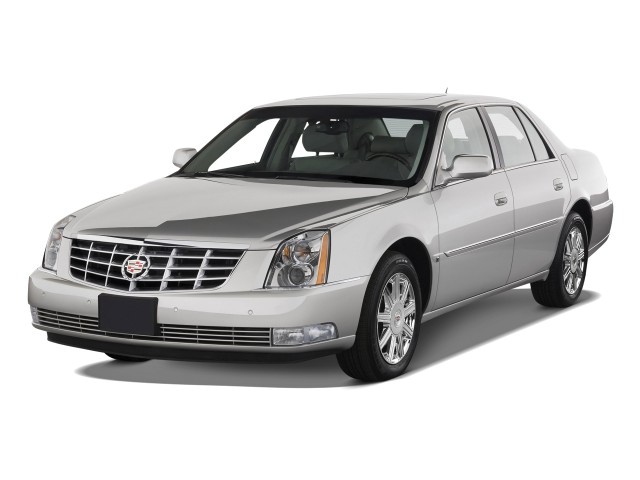 The 2008 Cadillac DTS shouldn't be a problem to track down, and crafting a deal should be no problem. There are two powertrains, and there's no reason to avoid the 300-horsepower V-8 since its only penalty is 1 mpg less on the highway.

The 2008 Cadillac DTS makes no apologies for being big, though it could use a more modern transmission and better crash scores.

TheCarConnection.com's editors read the latest road tests on the new 2008 Cadillac DTS to write this comprehensive review. Our car experts also drove the 2008 Cadillac DTS to be able to deliver more opinion and details on the car, to compare it with other cars in the class, and to help you decide if the DTS is the right car for you.

The 2008 Cadillac DTS is a front-drive, full-size luxury sedan of the old-school variety. It remains the most traditional model in the Cadillac lineup, and you're as likely to see it used as an airport car, a bulletproof sedan, or transportation for the Pope or the President as you are to see it driven on the road by civilians. It's also commonly used as the basis for hearses.

That said, the Cadillac DTS has some enormous virtues, not the least of which is its size. It can seat five or six passengers, depending on seat configuration, and all those passengers can be full-sized adults. There's plenty of head- and legroom for all in the DTS's huge cabin.

The DTS offers buyers a choice of either a 275-horsepower, 4.6-liter V-8 or a 300-horsepower version of the same engine. Both come mated to a four-speed automatic gearbox, which doesn't help the DTS get more than 23 mpg on the highway.

The 2008 Cadillac DTS is designed to appeal to buyers who favor a large and powerful sedan with conservative styling, a soft ride, gentle handling, and a plush interior. The exterior shape is creased and angular like the current generation of Cadillacs, and in darker colors, it's reasonably handsome. The interior is well-executed, though the large seats in leather are slippery and unsupportive. Large gauges and a tall center stack on the dashboard with a touch-screen video display are the hallmarks of the dash, along with lots of wood veneer.

Stability control with brake assist and Magnetic Ride Control help refine the car's ride and handling characteristics. Six airbags and a long list of amenities are standard, but the Cadillac DTS gets only four-star crash ratings for front and side impacts and for rollover.

A Lane Departure Warning system and a Side Blind Zone Alert system are new options for 2008. Other popular options such as XM Satellite Radio, a cargo mat, and rear sunshades are now offered with a wider variety of optional equipment packages than before. A Platinum Edition gets a "handcrafted" interior and special badging.

The 2008 Cadillac DTS remains a traditional luxury car, with a few concessions to modern style.

The 2008 Cadillac DTS is a front-drive, full-size luxury sedan of the old-school variety. It remains the most traditional model in the Cadillac lineup, and you're as likely to see it used as an airport car, a bulletproof sedan, or transportation for the Pope or the President as you are to see it driven on the road by civilians. It's also commonly used as the basis for hearses.

The 2008 Cadillac DTS remains “a traditional large America luxury sedan,” Edmunds says. According to Car and Driver, the DTS “wears a subdued version of Cadillac's edgy new styling,” and Motor Trend agrees the DTS wears “a light dose of new-wave Caddy styling,” while Cars.com thinks “the new model's styling evokes Cadillac's STS sedan.” Kelley Blue Book says its styling "ties it to the DeVilles of the past." Automedia reports “vertical headlights and taillamps, accompanied by an egg-crate-pattern grille” are part of the heritage cues, while the “more architectural, linear” appearance also sees improvements, such as LED taillamps. Buyers can opt for a tradition, stand-up wreath-and-crest hood ornament, they add.

Edmunds praises its "more-refined exterior styling" and a "greatly improved interior design and quality" that has "more curves in the right places." Large gauges and a tall center stack on the dashboard with a touch-screen video display are the hallmarks of the dash, along with lots of wood veneer. Motor Trend observes the DTS “benefits from the use of more premium materials.” Automedia says, “Even if the DTS lacks a vibrant personality, it exudes a certain luxurious yet homespun appeal.” Edmunds concludes, “Overall, the cabin is handsome and most controls are simple to use -- no small feat given the large number of high-tech features.”

The 2008 Cadillac DTS delivers adequate power with the cushioned ride that most longtime fans have come to expect.

The eight-cylinder, front-wheel-drive 2008 Cadillac DTS delivers sufficient horsepower to move its considerable bulk around with extreme comfort and ease.

The 2008 Cadillac DTS is equipped with one of two 4.6-liter Northstar V-8 engine options. The base and luxury Cadillac DTS models are powered by a 275-horsepower engine that Kelley Blue Book describes as having an "utterly smooth response." By way of comparison, the Performance model engine has a whopping 292 horsepower. Many reviewers, including those at MyRide.com, note that given the "identical displacement" of this 2008 Cadillac, they find "negligible differences in [real world] power ratings." Car and Driver calls the power “adequate.” Edmunds reports, “Either way, the lone transmission is a four-speed automatic, which is calibrated for quicker response in the Performance model.” With the latter, “we've timed a DTS Performance to 60 mph in 7 seconds flat.” Motor Trend calls the transmission “effective, but somewhat old news in this world of five, six, and even seven-speeders.”

Fuel economy is rated by the EPA at 15/23 mpg for the standard version, and 15/22 mpg for the Performance model.

Kelley Blue Book notices that with an "indisputably soft suspension, the DTS is far less floaty than might be expected." That smooth ride is the hallmark of any Cadillac. The DTS does not satisfy everyone, though. Reviewers at MyRide.com describe the 2008 Cadillac DTS as having a "cushiony ride without much wallow." ConsumerGuide Auto details all 2008 Cadillac DTS Trims as handling "competently," though noting that the luxury sedan "is compromised by its size and heft." They add it "comfortably smothers most bumps," though it "allows some float and wander over large pavement humps."
Car and Driver is also less than impressed with the handling. They chide the Cadillac DTS for a "vague steering feel."

The 2008 Cadillac DTS has tremendous interior and trunk room, but seats aren’t supportive and materials are good, but not great.

It's no coincidence that the 2008 Cadillac DTS is used as the base for limousines. The vast room available is unparalleled in American-made automobiles. Edmunds says, “the sheer volume of room in the cabin makes the DTS a fantastic long-distance highway cruiser.”

According to Car and Driver, the DTS is “big and roomy.” One of the few cars left that offers six-passenger seating, the DTS has “a front (split) bench seat that is available on the two lower trims,” Edmunds reports. The seats have “as much legroom in back as they do in front.” ConsumerGuide proclaims the car’s "standard bucket seats are all-day comfortable." Automedia observes, “Tons of front-seat space lets occupants stretch out. Comfortable seats are well cushioned with modest side bolstering. Support is pretty good, for both the back and thigh.” In the rear, Automedia adds, “backseat space is no less bountiful, but a hard seatback is less inviting for the center occupant.” Car and Driver dislikes the “unsupportive, couch-like bucket seats,” though.

Though the DTS is “designed for a comfort-oriented driver,” as Car and Driver observes, the quality of materials isn’t quite top-drawer. Edmunds says, “Although generally good, the interior materials are not up to the high standards set by European or Japanese luxury marques.”

Noise and vibrations are damped well, though. Kelley Blue Book says "except for a tiny vibration at idle, the DTS is ultra-quiet." Car and Driver also compliments the 2008 Cadillac DTS for its "ample interior volume" and a particularly "quiet cabin."

Even without the expensive extras, the 2008 Cadillac DTS is reliably secure with many standard safety features.

The 2008 Cadillac DTS scores well in front impact crash tests, but less so in side impact tests.

The National Highway Traffic Safety Administration (NHTSA) gives the DTS five stars for driver-side front impact protection; all other front and side impact tests, as well as rollover tests, are rated at four stars. The Insurance Institute for Highway Safety (IIHS), meanwhile, gives the DTS a “good” rating for its more stringent front-impact test, but only an “acceptable” rating for side impacts.

There are plenty of standard safety features on the 2008 Cadillac DTS as outlined by Cars.com. Anti-lock brakes and "StabiliTrak electronic stability system with brake assist" are among them, as are six airbags (side impact, curtain, and front passenger unit). This includes the "new dual-depth" front airbags that deploy "either shallow or deep depending on crash severity, seat belt usage and occupant position," according to Cadillac.

Impressive as the standard 2008 Cadillac DTS trim is, some of the optional safety features are more interesting. For instance, Edmunds is impressed by the 2008 Cadillac rear bumper sonar system that uses radio waves to detect objects while in reverse. There are also Lane Departure Warning and Side Blind Zone Alert systems. These options are designed to alert Cadillac 2008 DTS drivers to the state of traffic around them with a series of alarms.

For an extra $2,000, the Cadillac DTS may be equipped with a night-vision option installed to project "onto the lower section of the windshield using a 'heads-up' display"; Motor Trend considers it especially useful "in inclement weather, when visibility is sharply reduced."

Used Cadillac DTS for sale near

The 2008 Cadillac DTS antes up with plenty of luxury features.

As is expected from Cadillac, 2008 DTS sedans come with a long list of standard features and an even longer list of electronic and trim options. Car and Driver reports that the DTS has “loads of features,” but some are “pricey options.”

A navigation system, remote start, and a sunroof are options, Cars.com reports, as is burl walnut trim. The 6.5-inch navigation screen may also function as an MP3 control or with expanded OnStar package options.

Be the first one to write a review on 2008 Cadillac DTS
Rate and Review your car for The Car Connection! Tell us your own ratings for a vehicle you own. Rate your car on Performance, Safety, Features and more.
Write a Review
USED PRICE RANGE
$3,995 - $15,650
Browse Used Listings
in your area

7.6
Overall
Expert Rating
Rating breakdown on a scale of 1 to 10?
Compare the 2008 Cadillac DTS against the competition
Compare All Cars
Looking for a different year of the Cadillac DTS?
Read reviews & get prices