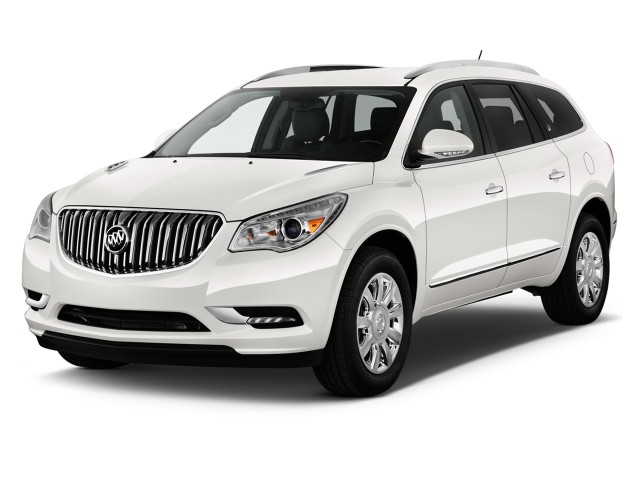 The Enclave has been around for a while, but it's grown into a strong seller, so discounts aren't as big or as widely available as with some rivals.

The Enclave is a smooth, comfortable vehicle suitable for large families.

The 2016 Buick Enclave is a handsome SUV with seating for up to eight, flexible cargo options and our pick among the three large General Motors crossovers.

The Encore shares a skeleton, front-wheel bias, and unibody construction with the Chevrolet Traverse and GMC Acadia, which means it isn't as thirsty or as cumbersome as the Cadillac Escalade or GMC Yukon, both of which are based on trucks.

Lauded for its handsome lines, the Enclave was the first of a series of new designs from Buick when it was introduced as a 2008 model. From the chrome waterfall grille to its slight Coke-bottle shoulder line over the rear wheels, we think the Enclave is the most appealing of the three large GM crossovers. Overall, the Enclave combines class and comfort with versatile passenger space and cargo capacity. All-wheel drive is available for sure-footed handling in foul weather. Front-wheel drive is standard.

The Buick is powered by a 288-horsepower 3.6-liter V-6 and is equipped with a 6-speed automatic transmission.

The Enclave rides smoothly, and the handling is reasonably responsive. On narrow roads it feels like a big vehicle, but in curves it does not lean excessively. It is a heavy vehicle and its mass is felt in the way it handles, takes off and stops.

The Enclave has a functional third row for adults, though the third row is not a place we'd choose to sit for hours on end.

Getting in and out of the front seats is easy and they are designed to fit people of all sizes. The driver's seat allows a good driving position. Seat heating and ventilation are available. Second-row passengers get a good view forward thanks to a high seating position. Headroom is more than plentiful.

Step inside the Buick Enclave and it feels like a premium vehicle. Quality materials and an attractive design makes it an inviting cabin. It's comfortable and spacious, with seating for up to eight passengers.

Safety features in the 2016 Enclave include a front-center airbag, which helps protect front occupants in a side impact. Blind-spot monitors and a rear cross-traffic alert system are available, as are lane-departure and forward-collision warning systems.

The Enclave carries over to the 2016 model year largely unchanged. This year, the big crossover SUV comes standard with 19-inch aluminum alloy wheels. Also new for 2016 Enclave models are OnStar 4G LTE and a built-in wi-fi hotspot delivers high-speed wireless Internet access to occupants whenever the car is switched on. Up to seven devices can be connected at the same time. A new Tuscan appearance package is available for 2016 Enclave models that uses bronze to highlight the waterfall grille and its 20-inch chrome wheels and to complement premium paint choices.

The Enclave's gas mileage of 24 mpg highway with front-wheel drive is on par with many other big crossovers, though an MDX or Highlander can outpoint it on the EPA scale. The 2016 Enclave with all-wheel drive is rated at 16 mpg city, 22 highway, 18 combined.

The Buick Enclave has a richly finished interior and a sleek, shapely crossover body.

The Buick Enclave styling with its sweeping lines has aged well. That's especially noticeable when you compare it the somewhat shapeless Chevrolet Traverse and very angular GMC Acadia, both of which share the Enclave's mechanical bits.

The Buick cabin has a soothing quality that's only become more convincing since its debut. The dash itself evokes a vaguely Art Deco theme accentuated by the analog clock up top on the dash. It's conservative and classy, with soft-touch materials accented with stitching. The Enclave was recently updated with a 6.5-inch touchscreen.

The Enclave is a large vehicle that rides nicely and handles better than expected.

The 3.6-liter V-6 that comes in the Buick Enclave delivers smooth acceleration, even when loaded with the whole family. The 3.6-liter V-6 is rated at 288 horsepower and comes with a 6-speed automatic.

The Enclave can tow up to 4,500 pounds, which should be more than enough for towing a couple jet-skis or a small boat out to the lake. If your trailer approaches or exceeds that weight, consider a GMC Yukon.

The Enclave handles more deftly than some luxury cars, and its ride is better than many. If you get the larger 20-inch wheels, you'll add a little more harshness, even though it's still softer and more refined than other three-row crossovers.

The Enclave steers well for a vehicle of its size, and body roll isn't excessive for its ride height, either, although you'll never forget that the Enclave is a very heavy vehicle. You feel that weight whenever you're starting, stopping, or making any abrupt change in direction, and the Enclave has more nosedive in hard braking than any other vehicle we've been in recently, but the brakes are confidence-inspiring, with a firm pedal feel.

The Enclave seats up to eight or can haul a large amount of cargo.

The Enclave has a roomy, comfortable cabin capable of carrying eight people.

The front seats are soft and accommodating designed to fit a wide variety of body types and the driver's seat adjusts to a good position for them. Seat heating and ventilation are available.

Passengers in the second row are elevated for a good view out front and at a good height for comfortable leg support. There is plenty of head room, with sufficient space for adults to stretch out.

The third row offers enough room for two adults. Getting in and out of the third row is not as easy as in minivans with lower floors, however. A tilt mechanism for the second row makes getting into the third row easier.

The Buick Enclave offers more than 115 cubic feet of cargo space when the second- and third-row seats are folded. The third-row seats fold completely flat, creating a massive load floor behind the second row. The second row tilts forward for even more space. Even with all three rows in place, there is 23 cubic feet of cargo space behind the third row when the cargo management system is removed.

The interior of the Enclave is attractive and nicely finished with materials that appear to be of good quality. The dash looks upscale, with restrained use of wood trim. The Enclave is one of the roomiest vehicles in its class, and it offers similar utility to that of a minivan even though it does not have side doors that slide.

Buick Enclave is large, which makes it safer in a crash, plus it has excellent crash scores for its class.

Over the years, the Enclave has kept pace with safety technology, adding new features and improving crash safety to stay at the top of the list of safe family vehicles.

The 2016 Enclave received a five-star overall rating from the NHTSA, including five stars each for the front and side-impact tests and four stars for the rollover test.

The IIHS gives the 2016 Enclave "Good" ratings for all of its tests. The big SUV hasn't been subjected to the agency's small-overlap crash test, which simulates hitting a tree or pole, so it's not eligible for a Top Safety Pick nod. Considering the Enclave's age, it's likely that this generation may not be retested by the agency for that safety measure.

All Enclave models are fitted with curtain airbags that protect all three rows of seats, front-seat side airbags, a center-front airbags mounted on the inboard side of the driver seat, and stability control. A rearview camera comes standard. On the options list are blind-spot monitors with cross-traffic alerts, forward-collision alert, and lane-departure warning systems.

Used Buick Enclave for sale near

The Enclave gets pricey, but its infotainment system and luxury touches earn their keep.

The Buick Enclave represents an excellent value based on its size, quality and level of equipment.

All Enclave models come with power windows, locks, and mirrors; cruise control; air conditioning; satellite radio; an AM/FM/CD player; and Bluetooth with audio streaming. A rearview camera, a USB port, HD radio, and voice recognition are also standard. A navigation system is a relatively inexpensive option, as is a 10-speaker Bose sound upgrade.

IntelliLink connects smartphones into the audio system through an intuitive interface. Connecting a smartphone enables hands-free calling and audio streaming, along with Pandora and Stitcher audio. The system has Apple Siri Eyes Free voice search and the ability to read text messages.

Those figures are comparable for the older vehicles in its class, but some of the newer entries offer much higher fuel economy. The 2016 Acura MDX is rated at 20/27/23 mpg; the Toyota Highlander is rated at 20/25/22 mpg in 4-cylinder, front-drive form—but also comes as a hybrid with a 28-mpg combined rating.

Be the first one to write a review on 2016 Buick Enclave
Rate and Review your car for The Car Connection! Tell us your own ratings for a vehicle you own. Rate your car on Performance, Safety, Features and more.
Write a Review
USED PRICE RANGE
$13,499 - $32,995
Browse Used Listings
in your area

8.0
Overall
Expert Rating
Rating breakdown on a scale of 1 to 10?
Compare the 2016 Buick Enclave against the competition
Compare All Cars
Looking for a different year of the Buick Enclave?
Read reviews & get prices
Related Used Listings
Browse used listings in your area
See More Used