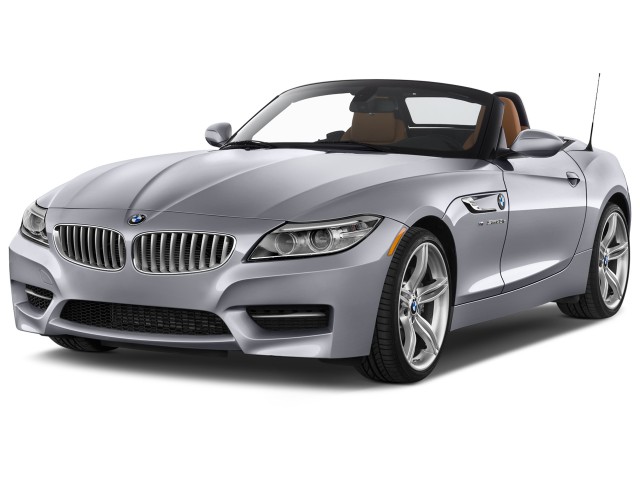 Just because it's entry level doesn't mean that the base Z4 sDrive28i isn't an absolute blast to drive.

The 2015 BMW Z4 is on the pricier side of the roadster segment, but it offers a nice blend of comfort, sport, and technology.

The BMW Z4 has aged gracefully since its redesign in 2009, and it's currently one of the oldest designs in the BMW portfolio. We haven't seen many updates since 2012, though it does offer a new color combination of browns and ivories for the 2015 model year.

That package includes a Sparkling Brown Metallic exterior paint, which is offered exclusively with an Ivory White and Burnt Sienna leather interior.

Inside, the Z4's well-appointed cabin feels typical BMW in its materials and design. The droptop's retractable steel roof delivers coupe-esque levels of isolation from the outside world and it tucks away neatly and rapidly when called upon. Last year's interior updates brought an improved wood trim and nicer leather upholstery, plus a Hyper Orange Package with orange and black accents inside.

The Z4 has yet to be subjected to the NHTSA or the IIHS' crash testing, but there are a lot of safety features included as standard.

The Z4's features generally impart a firs-trate feel, although some of the latest safety tech like automatic emergency braking and adaptive cruise control isn't available here. That said, BMW last year added high beam assistance, park distance control, and real-time traffic data on models with navigation. A host of additional options like satellite radio and heated seats are on offer, but even a base Z4 is well-equipped; as it should be at this price point.

Against competition like the Porsche Boxster, the BMW Z4 can feel surprisingly unathletic. It's heavier and more tuned to balance speed with comfort. Under its hood sits carry over engin eand transmissions: a 240-horsepower 2.0-liter turbo-4 in the sDrive28i and a 300-hp, 3.0-liter turbo-6 in the sDrive35i. The sDrive35is features a more potent 335-hp version of the 3.0.

All models accelerate briskly, with the sDrive35is sprinting the fastest to 60 mph: just 4.8 seconds. All models are peppy, but the sDrive28i can feel a little more labored at lower speeds. Each version corners stable with a balanced feel, but their suspensions are a little soft and their runflat tires a little harsh for track-day driving. An optional Sport Package delivers a little more performance plus some nice styling bits.

Transmission choices include a 6-speed manual and an 8-speed automatic for sDrive28i models, but the sDrive35i and sDrive35is models are only available with the seven-speed DCT.

The BMW Z4 has classic roadster proportions, thanks to its short rear and long, low hood. Look closely, though, and you'll find that aerodynamics and sporty bits are 100 percent modern German.

The Z4's cabin is more cockpit-esque and oriented toward the driver than BMW's sedans, for instance. It's an upscale interior that's matched but not surpassed by rivals. With its austere design, the interior can be surprising at first, but high-end materials and the sleek controls balance the busy feel.

It may come as a surprise that the Z4 has been around for five years now, but its styling remains balanced and it's a rare sight, which helps it feel fresher than it really is.

New this year, the Z4 is offered in Sparkling Brown Metallic, which comes exclusively with the Ivory White and Burnt Sienna leather interior.

The sDrive35is is the most memorable BMW Z4 to drive; even the base four-cylinder is quick and entertaining.

The 2015 artfully blends the sportiness of a roadster and the comfort for of a compact luxury car into one handsome package. It may not be quite as sharp as some of its competitors, but it also doesn't make the compromises that other cars must in order to be fun behind the wheel. In short, it's quick, pleasant, and civilized.

Opt for the M Sport Package (it's standard for the sDrive35is) and you'll find confident, quick cornering and direct if not quite intuitive steering. It's a more muted feel than you'll find in, say, an M3, but the Z4 delivers well on its grand touring mission. Without the package, the Z4 is much softer, but it still manages to entertain. One caveat: the run-flat tires on all have stiff sidewalls that can deliver a punishing ride on especially bad pavement even in the base suspension.

Regardless of Z4 model, all have a controlled and balanced chassis that features an adjustable suspension with Comfort, Sport, and finally Sport+ settings.

As you may expect, performance is commensurate with engines: the base Z4 is quick and pretty fun, managing 0-60 mph in a quick 5.5 seconds, BMW says, but in reality it lacks some of the forceful vigor of the 6-cylinder versions.

On the sDrive28is, a 6-speed manual gearbox comes standard. It's an excellent transmission in BMW's tradition. An optional 8-speed automatic fires off shifts quickly, but it dulls some of the Z4's spirited feel. For the Z4 sDrive35i, the 8-speed automatic is replaced with a 7-speed dual-clutch transmission, and the manual transmission has been removed for 2015. The dual-clutch shifts faster than a human can, but it doesn't quite match the race-level crispness and near-telepathic logic of Porsche's PDK unit in the Boxster.

Space is at a premium in the BMW Z4, but then again, so are gorgeous styling and quality materials.

The 2015 BMW Z4 is one of the best-balanced cars in the business, but it's not without its compromises.

What you can't see is perhaps the most welcome: BMW's reflective leather. Instead of soaking up the rays to scorch your exposed skin, the seats merely stay warm to the touch. This may help extend the driving season in toastier climes for many.

The power retacting hard top serves as another strength. It stows or rises quickly and smoothyl. Top up, the Z4 is essentially a coupe with all-weather security and isolation.

The seats are comfortable and adjustable to suit a wide range of body sizes and types, but they're mounted rather high in the cabin, compromising head room for drivers over six feet tall when the top is up (or putting the top of the windshield near eye-level even with the top down).

Cabin and trunk space are also tight in the Z4. Planning a weekend trip will involve a careful selection of what you really need to bring along, as there's just no room for much more than two small carry-ons and a few personal items. The cabin itself has numerous pockets and trays, but they're small--don't expect to securely stash a laptop with two people in the car.

Despite these shortcomings, however, the Z4's construction and materials are very good throughout the cabin. Leather upholstery is soft and supple, and can be expanded to the dash, door caps, and visors with an extended leather package. Unlike many convertibles, the Z4 exhibits very few squeaks, rattles, and vibrations, further indicating its build quality.

Safety equipment is competitive, but so far, no crash tests have been performed on the BMW Z4.

Visibility is never much of an issue in the Z4, even with the folding hardtop raised. The side windows are quite large, the rear window opening is well-shaped, and forward visibility is expansive.

Front and side airbags, adaptive brake lights, and multi-setting stability and brake control systems are all standard. The Z4 can even cut fuel flow, turn on the hazard lights, and unlock the doors in the event of an accident.

For those seeking even greater safety, optional upgrades include: automatic headlamps, park distance control, and BMW Assist service with Bluetooth. More advanced features, such as a rearview camera, blind spot monitoring, and lane departure warning systems aren't available in the Z4, however.

Used BMW Z4 for sale near

Like other BMWs, the Z4 has a lengthy list of performance and styling add-ons that can really hurt the Boxster-like base prices.

With prices starting at $50,000 and climbing above $70,000 for a loaded model, you'd expect to find a long list of standard and available features. Fortunately, the Z4 is as well-equipped as the pricing suggests.

The BMW Z4 is one of the most economical sports cars, in terms of four-cylinder gas mileage.

The BMW Z4 offers both efficient and fast versions of the roadster, so you can choose your flavor of fuel economy.

The base Z4 sDrive28is uses a turbocharged four-cylinder engine to score 22 mpg city, 34 mpg highway, and 26 mpg combined with the manual transmission. Opting for the eight-speed auto shaves 1 mpg from the highway rating, but leaves the others untouched.

Those looking to save some cash at the pump with their sport roadster will choose the turbo four-cylinder Z4 sDrive28i, and in our experience, real-world gas mileage easily matches, and occasionally exceeds, the EPA ratings.

Be the first one to write a review on 2015 BMW Z4
Rate and Review your car for The Car Connection! Tell us your own ratings for a vehicle you own. Rate your car on Performance, Safety, Features and more.
Write a Review
Browse Used Listings
in your area
7.8
Overall
Expert Rating
Rating breakdown on a scale of 1 to 10?
Compare the 2015 BMW Z4 against the competition
Compare All Cars
Looking for a different year of the BMW Z4?
Read reviews & get prices
Related Used Listings
Browse used listings in your area
See More Used