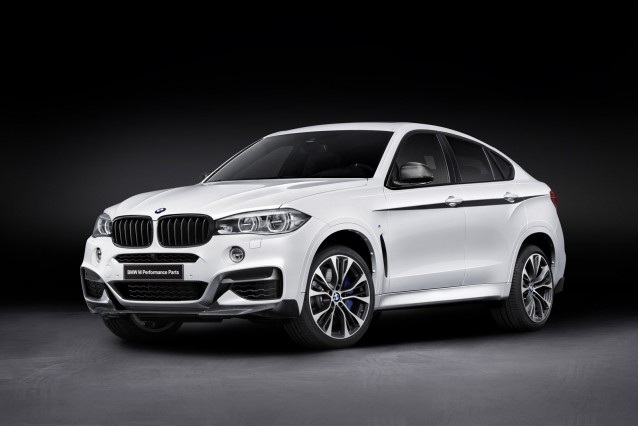 If you live outside the snowbelt, consider the new rear-drive X6 sDrive35i for better on-road dynamics and, possibly, slightly better gas mileage.

The 2015 BMW X6 continues to stun with its controversial style, while improving its on-road performance with a rear-drive option and a more powerful V-8.

The BMW X6 is an unusual form factor—think coupe-like SUV—bit it's far less of an outlier than it was. With the introduction later this year of the new Mercedes-Benz GLE Coupe, a sexier take on what's now called the M-Class, and the BMW X4 taking the form down a size, it now has company.

Despite the growing popularity of the curvaceous utility concept, the X6 continues to turn heads, and under the skin, it packs formidable capability and comfort. It also now includes the X6 M, an exceptionally powerful edition with a twin-turbo V-8, its own styling cues, and a layer of track-ready performance and infotainment technology.

The 2015 BMW X6, which is very closely related to the 2015 BMW X5, has been fully renewed and redesigned, although its exterior has seen such evolutionary change that it might not even appear all that different at first glance. At closer look, it brings a fresh take on the fluid, coupe-like theme with updated front and rear ends. The familiar BMW kidney grille is highlighted by an X-shaped contour and flanked by large twin-circle LED headlights up front, with wide, large air inlets lending an aggressive look, refined just a touch with chrome inserts. Adaptive LED headlights are optional. At the rear, the new design continues to emphasize the width of the X6, with three-dimensional LED light strips, L-shaped rear lights, and, like the front, matte silver underbody accents. Up close, we like everything but the somewhat garish side gills, which BMW says reduce wheel well turbulence. Two new colors are available for 2015 as well: Dark Olive and Flamenco Red Metallic.

Inside the 2015 BMW X6, the look is familiar with a 10.2-inch flat-screen display dominating the dashboard view, accented by a choice of brushed aluminum, or a variety of wood trim elements. High-gloss black and pearl gloss chrome surfaces complete the sophisticated, modern theme.

As with other recent BMW vehicles, the X6 is available in a range of trim lines, including the xLine and M Sport line. Each adds a themed package of appearance elements, ranging from refined to sporty. Optional interior upgrades include six colors of Dakota leather, with Cognac and Coral Red new for 2015. X6 M vehicles add their own Merino leather and Alcantara headliner, aluminum accent trim, and more M badging.

Mechanically, the X6 also gets some upgrades and new options for the 2015 model year, including its first rear-drive variant, the X6 sDrive35i. Powered by the same 300-horsepower, 300-pound-foot, 3.0-liter turbocharged in-line six-cylinder found in the all-wheel-drive X6 xDrive35i and using the same eight-speed transmission found throughout the X6 range (aside from the monstrous X6 M), its only real difference is the lack of drive to the front wheels. The X6 xDrive50i's 4.4-liter twin-turbocharged V-8 engine gains 50 horsepower, now rated at 450 horsepower; in X6 M trim, it's rated at 567 hp, good for 0-60 mph times in the 4-second range.

We've found performance to be quite strong—strong enough for most needs—in xDrive35i guise, where the X6 can get to 60 mph in six seconds and performance with the turbo six is strong and smooth. The X6 drives even more like a tall 5-Series than before, and within reason for this nearly 5,000-pound vehicle, it handles precisely and brakes with composure. Multiple drive modes now include an Eco mode that allows more coasting. The M edition has stiffer springs, rear air springs, adaptive shocks, high-performance brakes, and its own driving modes including a Sport+ mode which dials stability control to an almost completely off setting. All-wheel drive is standard on the X6 M, though it's set with a rear power bias. Acceleration is blistering, and the X6 M bridges the real world and the track performance world capably, though it's still a vehicle with many conflicting messages about performance as well as utility.

Despite the tapered roofline, there's now space for five in the X6, as the rear seat is now a bench (outboard positions are still given the comfort priority, though). The roofline doesn’t take its downward plunge until just aft of rear passengers’ heads, so there’s actually plenty of headroom in back. Legroom and knee space aren’t quite in the realm of a full-size car or crossover, but they’re a bit more ample than in a mid-size sport sedan like the 5-Series. Taking another couple out to dinner or for a short weekend trip should be no problem.

Few buyers are ever going to miss the (upper) portion of the X5's cargo area that's carved out by a swoopier roofline and sexier sheetmetal to make the X6. The cargo floor is about where you’d guess it to be, for a taller utility vehicle, with plenty of room for grocery bags to fit upright; and there’s a handy ‘secret’ storage tray underneath. Rear seatbacks do flip forward easily, to a position that’s nearly flat with the cargo floor.

On the technology front, the 2015 BMW X6 offers a head-up display; BMW Night Vision with pedestrian, animal, and object detection, as well as collision warning; and BMW Selective Beam headlights. The Insurance Institute for Highway Safety (IIHS) has already rated the automatic-braking function and potential accident avoidance of its 'Driver Assistance Plus/ACC Stop & Go + Active Driving Assistant' package to be 'superior', but other crash data is still absent.

The 2015 X6 comes very well equipped, but with tantalizing wheel, trim, and interior upgrades, as well as those technology extras, it's quite easy to load up an xDrive35i to more than $90k or an xDrive50i to above the $100k mark--where the X6 M takes up the baton, with its starting price of $103,050.

2 Reviews
5 star
50%
4 star
3 star
50%
2 star
1 star
Rate and Review your car for The Car Connection! Tell us your own ratings for a vehicle you own. Rate your car on Performance, Safety, Features and more.
Write a Review
For 2015 BMW X6

THIS CAR IS ALL OVER THE ROAD. It will literally switch a 1/2 lane without you moving steering wheel. Called BMW, Service agreed and said its the nature of the car.

Very impressed still trying to figure out the computer on the darn thing love the ride interior is outstanding
people found this helpful.
Was this review helpful to you? Yes
Browse Used Listings
in your area
8.0
Overall
Expert Rating
Rating breakdown on a scale of 1 to 10?
Compare the 2015 BMW X6 against the competition
Compare All Cars
Looking for a different year of the BMW X6?
Read reviews & get prices
The Car Connection Daily Headlines