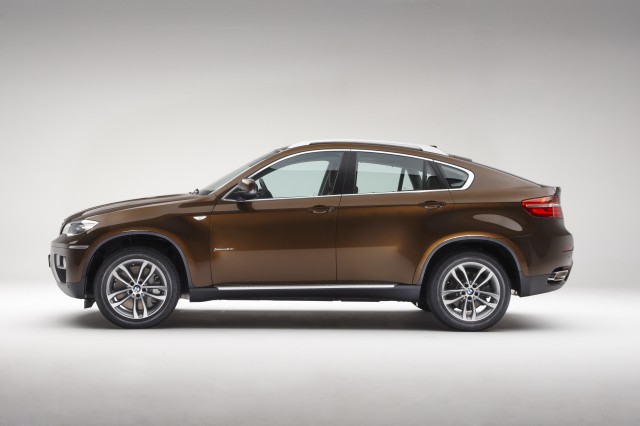 With an all-new BMW X5 arriving for 2014, a redesigned version of the X6 isn't too far behind.

The 2014 BMW X6 bends genres, in mostly successful ways; but whether you like it depends on what you're crossing over from.

The 2014 BMW X6 is still an alchemist’s blend of coupe, crossover, and luxury sedan, with a polarizing but still head-turning design. Carrying forward into the 2014 model year with only minor updates, the X6 continues to offer a unique take on the luxury SUV.

With its head-turning design on the outside, the X6 takes a mashup of form factors and somehow turns them into a cohesive design. It doesn't quite have the smooth, born-to-be-that-way silhouette of the Audi A7, but it does look complete and at ease.  Above the beltline, the X6 is graceful, even athletic, with coupe- and fastback-like properties in its curves. Below the beltline, it's the opposite; tall, somewhat off-road-flavored SUV cues dominate. For some, the combination is too visually incongruous, or simply too weird. For others, it's an acquired taste that improves with time and familiarity. Still others love the X6 on sight. Dress the X6 up in X6 M guise, and it's even more striking, and perhaps even more controversial--what's a crossover doing looking like a supercar?

Inside, the X6's design is conventional, with elegantly contoured surfaces outfitted in tasteful, even classic, color schemes and rich materials. The layout itself is perhaps more sedan-like than you might expect for an SUV-like vehicle, particularly the high-mounted center console--and the tight back seat.

BMW's excellent outgoing X5 platform is what underpins the X6 and makes it so magnetic. The standard X6, the xDrive35i, gets a 3.0-liter turbocharged in-line six-cylinder under the hood, rated at 300 horsepower and 300 pound-feet of torque. That's plenty of power, but not really enough to seem truly quick for a vehicle of this size. The X6 xDrive50i, however, gets a 400-horsepower, 400 pound-foot 4.4-liter twin-turbo V-8 engine that motivates the X6 with more than mere adequacy. Step up to the X6 M's 555-horsepower output from a similar twin-turbo V-8 engine, and you have all you could ask for and then some.

There's good steering feel and surprisingly little body roll, and the handling is quite carlike. While it's no standout in handling or ride if cars are your benchmark, considering its massive tires, stiff suspension, and electronic controls, the X6 M does do things no utility or crossover should--and does them with apparent ease.

Much in the same way as those first impressions go, you're likely to find the X6 the perfect lifestyle vehicle at some times, and perhaps infuriatingly impractical at others. The front seats are spacious and comfortable, while the rear seats are short on headroom and lack some of the features you'll find in the second row of more traditional SUVs. And while cargo area is good compared to a mid-sized sedan, the sloped roof impinges on the space available for larger items. And there are nearly 60 cubic feet of cargo space with the rear seatbacks folded forward. It's all relative, right?

Safety features include driver and passenger dual-stage front airbags, front side airbags, head protection system (HPS), adaptive brake lights, active head restraints in the front seats, battery disconnect in the event of an accident, anti-theft alarm, and BMW Assist with Bluetooth. Neither the NHTSA nor the IIHS have crash-tested the BMW X6, though the structurally similar X5 scores top marks of "good" according to the IIHS.

As you'd expect from a BMW, the X6 offers almost all of the technology, equipment, and entertainment features you'll find on the market today. In addition to the optional upgrades, the X6 offers a strong set of standard features across all models, including: automatic climate control; push-button ignition; front and rear parking sensors; a 10-seaker audio system; 10-way adjustable power seats; dynamic cruise control; and more. Among the available add-on features, you'll find such convenience and high-tech items as: four-zone automatic climate control; real-time traffic; iDrive-based infotainment and navigation with BMW Apps support; Bluetooth connectivity; iPod and USB connections; a premium hi-fi audio system; six-disc DVD/CD changer; and more. Ticking every available box can yield a vehicle that's a veritable tour de force of gadgetry, but also one bearing a hefty price tag. The iDrive system, which contains and control all of the X6's higher functions (infotainment, navigation, audio, etc.), has grown significantly simpler and more intuitive in recent years, though it can still present a learning curve for new owners.

1 Review
5 star
4 star
100%
3 star
2 star
1 star
Rate and Review your car for The Car Connection! Tell us your own ratings for a vehicle you own. Rate your car on Performance, Safety, Features and more.
Write a Review
2014 BMW X6 AWD 4-Door

The fact is, that you have to rest too often, as the tank is "only" 85 liters. If you go really fast (as I like), then you tank every 1.5 hours :( + More »
people found this helpful.
Was this review helpful to you? Yes
USED PRICE RANGE
$18,995 - $42,870
Browse Used Listings
in your area
8.0
Overall
Expert Rating
Rating breakdown on a scale of 1 to 10?
Compare the 2014 BMW X6 against the competition
Compare All Cars
Looking for a different year of the BMW X6?
Read reviews & get prices
Related Used Listings
Browse used listings in your area
See More Used
The Car Connection Daily Headlines