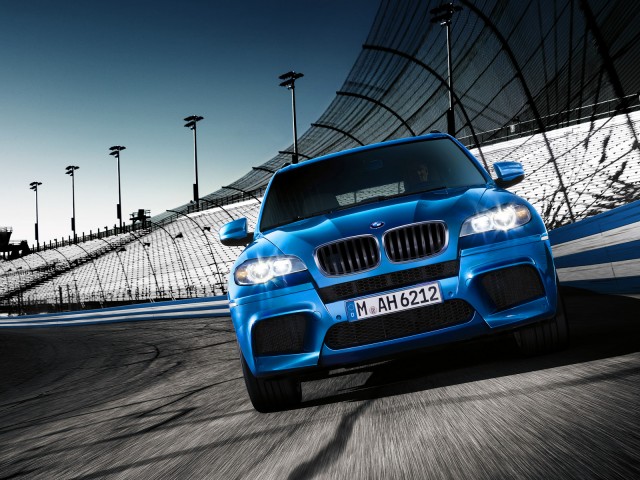 The diesel X5 xDrive35d is lagging behind this year, remaining as a 2012 model for the time being while 2013 gasoline models are on the lots. Interested buyers may be able to find good deals on the more fuel-efficient diesel, perhaps improving the previously unattractive break-even point on up-front cost versus fuel savings.

While it's not as fresh-faced as some of the competition, the 2013 BMW X5 continues to shine in utility, comfort, driving, and, in the X5 M, shockingly high performance.

The 2013 BMW X5 has been a front-runner among luxury SUVs since its introduction. It's sporty, refined, and capable, and though it hasn't changed much in the 2013 model year, the few changes keep the X5 competitive until a new model bows in 2014.

Stylistically, the X5 is, unlike its X6 coupe-utility brother, largely unobjectionable. It's chunky, but well-proportioned, casting a masculine shadow without going into brawny territory. Inside, the look is typically conservative, but modern, and well-executed in color, materials, and customization options.

Speaking of thrills, the X5's handling is surprisingly sports sedan-like, despite its size and bulk. Even in base form, acceleration is brisk, but in all models, turns don't mean fear--they mean fun. In the X5 M, the most high-performance version of the X5, you have a track-ready SUV. It might not make sense, but it will once you drive one. Unfortunately, it costs roughly double the base X5.

Inside the X5, there's comfort to spare despite the sporty handling. Ride quality is very good on road and acceptable off-road. Likewise, materials quality is very good, with room for up to seven passengers, though the rearmost seats require small occupants. Storage and cargo space, while not excessive, are more than adequate.

The IIHS scored the 2012 BMW X5 its top mark of "good" in front and side impact crash tests. The NHTSA hasn't fully rated the current X5 yet, but does give it a 4 out of 5 stars score in rollover resistance. Standard safety equipment including stability and traction control, a full complement of advanced airbags, all-wheel drive, and the X5's inherent stability in dynamic maneuvers all enhance safety as well.

Compelling isn't a word used to describe the 2013 BMW X5's exterior styling, but its conservative style will suit many.

While it depends on who's doing the looking, the 2013 BMW X5 is largely unobjectionable in its exterior affect. If that doesn't sound like a ringing endorsement, that's because it's not; the X5 is, ultimately, a bit conservative and bland despite some aggressive features and masculine elements.

The tall, chunky proportions mean business, but they're softened by smooth lines, delicate details around the front end, and BMW's sedan-bred front end identity. While it's somewhat middle-of-the-road, it's also not something everyone will like. The X5 M breaks the X5 mold--a bit--by adding some seriously bonkers bodywork that only the truly track-mad or tuner-friendly will really enjoy.

Inside, the X5 is classical yet modern, with tasteful color schemes, quality materials, and careful design focused on clean looks and functional interfaces.

Though there are four main trim lines to the 2013 X5, they differ very little in appearance, with a wide range of exterior and interior customization available. The X5 M is the only real deviation from the lineup, with aggressive body work, larger, lower-profile wheels and wider tires, unique interior elements, and a decidedly racy look.

The 2013 BMW X5 offers impressive performance for an SUV, but it's the X5 M that really shines, especially on track.

The 2013 BMW X5's strongest suit is its paved road handling and comfort. In V-8-powered xDrive50i form, there's plenty of power on tap--and most certainly so in the 555-horsepower X5 M--but all X5s steer, grip, and feel much like a car behind the wheel.

The xDrive35i's 3.0-liter turbocharged in-line six-cylinder engine is rated at 300 horsepower and 300 pound-feet of torque. It feels like it offers every bit of that to the driver, with good low-end torque and strong acceleration at almost any speed. The eight-speed automatic transmission, common to all X5s, feels sporty enough to keep up with the X5 when the driver wants to hustle, and is very laid-back and smooth-shifting when the pace is more relaxed.

With the xDrive50i, the X5 steps into the realm of the real performance SUV, bringing 400 horsepower and 400 pound-feet of torque from its 4.4-liter twin-turbocharged V-8 engine. The result is something like a very tall performance wagon, with shockingly good cargo room.

The optional AdaptiveDrive dynamic damping system improves the sporty side of the X5. Electronic stability and traction controls provide a safety net that allows a fair amount of fun before slowing things down and straightening them out.

The X5 M also gets a turbocharged V-8 engine, but scores a huge 555 horsepower and 486 pound-feet of torque, delivering sports car-like acceleration. The suspension, wheels, and tires are also upgraded, enabling incredible feats, though to truly tap the X5 M's capability, you have to get to a track. Even the brakes on the 5,250-pound beast are impressive. M Dynamic Mode stability control allows even greater slip angles while still providing computer-aided chassis control.

Off-road, the X5 is perhaps less impressive than some of the alternatives, and the often low-profile tires fitted may compromise grip and rugged-terrain capability, but it's not just a soft-roader. The X5 can handle mud, snow, gravel, inclines, and even water crossings when driven properly.

Third-row space is laughable, but the remainder of the 2013 BMW X5's interior is comfortable, spacious, and well-executed.

BMW's reputation for building premium vehicles is upheld with the 2013 X5. Ride comfort, seating space, materials--they're all up to the standard set by BMW's other vehicles.

While not as plush as some of its competition, the X5's interior matches its ride: sporty and firm. The seats are comfortable, aside from the cramped third row, and headroom is very good in the first two rows. The optional dynamic suspension doesn't allow the ride quality to move too far away from comfort in the pursuit of sport.

Materials and quality are perfectly on par with other BMW vehicles, and while that won't entail Range Rover-like woods and leathers, it doesn't entail the Range Rover's price tag, either. One complaint noted by our editors is a flimsy plastic panel covering the opening of the hinged tailgate--it's a minor oversight, but an oversight nonetheless.

Inside the cabin, wind and road noise are kept to a pleasant minimum, and there's no SUV-typical booming to be heard when crossing pavement seams or other small obstacles at speed. Close tolerances in the interior panels and solid construction prevent any squeaks or rattles.

The rear cargo area is large, with door-mounted bins, a deep center console, and seat-back pockets supplementing the large-item area inside the liftgate.

Though it hasn't yet been crash-tested, previous versions of the BMW X5 have scored well, and there's ample standard safety equipment in the 2013 model.

The National Highway Traffic Safety Administration (NHTSA) hasn't crash-tested the latest BMW X5, but does give it a four-star rollover rating. The Insurance Institute for Highway Safety (IIHS) hasn't tested the X5 either, but did crash-test the structurally identical 2012 model, awarding it top marks of "good" in frontal offset, rear, and side-impact tests.

BMW's available equipment list for the 2013 X5 should satisfy most buyers, from tech to audio to look and feel.

The 2013 BMW X5 is, like other BMWs, highly customizable, but also well-equipped even in standard form. The once difficult-to-use iDrive controller retains its central function in the car's infotainment system, but is now much more intuitive and straightforward to use.

The one caveat with all of the available configurations and high-tech equipment is that the price can balloon quickly. That said, if you're willing to pay for it, there aren't many options you won't find on the 2013 X5.

The iDrive controller gives access to navigation (on equipped models), smartphone-linked apps, the HD Radio-capable audio system, and much more.

Upgrades available on the 2013 X5 include nappa leather; several choices of wood and metal trim; a wide range of upholstery colors; and high-tech add-ons like heads-up display, active steering, and more.

The 2013 BMW X5 might not seem it, but it's one of the most efficient vehicles in its class.

No SUV thus far has garnered truly respectable gas mileage, and that's largely a matter of physics: heavy vehicles that must accelerate with normal traffic simply require more fuel. BMW has mitigated that thirst somewhat, however, particularly in the six-cylinder models.

The X5 xDrive35i, for example, rates 16 mpg in town and 23 mpg on the highway for 19 mpg combined. That's not fantastic, but it beats many full-size trucks while seating five in luxury.

The xDrive35d diesel model, while still on sale, is not offered as a 2013 model as yet--it continues as a 2012 model due to a late update cycle last year. Regardless of the diesel's model year, it is the fuel mileage hero of the range, EPA-rated at 19 mpg city and 26 mpg highway for 22 mpg combined.

The V-8-powered xDrive50i model doesn't score highly in gas mileage, rating 14 mpg city and 20 mpg highway for 16 mpg combined, though that's still better than much of the V-8 SUV alternatives. The X5 M  the thirstiest of the bunch, rated at 12 mpg in town and 17 mpg on the highway for 14 mpg combined--not that gas mileage is a primary concern when buying a 555-horsepower, track-capable SUV.

3 Reviews
5 star
33%
4 star
67%
3 star
2 star
1 star
Rate and Review your car for The Car Connection! Tell us your own ratings for a vehicle you own. Rate your car on Performance, Safety, Features and more.
Write a Review
2013 BMW X5 AWD 4-Door xDrive50i

A well rounded SUV when it comes to looks, performance, features, and comfort ability.

Good quality and design and reliable but not so good in Fuel Economy.
people found this helpful.
Was this review helpful to you? Yes
For 2013 BMW X5

Fast forward 15 years, compared to the new F15, which has the more comfort type of ride, drive, and feel. The F15 has the newer CAFE compliant electric power steering which takes the feel from the road away. Steering is a big deal for hard core BMW drivers, but the F15 is more aimed at newer folks or non BMW enthusiasts.

I prefer the heavier steering and responsive drive around corners so I guess the E70 is more for the enthusiast while the F15 is more for the newbies / status symbol buyers / soccer moms, etc...

The F15 when I test drove 2 of them, were muted, numb, soft, and Lexus like in ride & handling. BMW changed the entire driving dynamics for their current F15 as well as their entire BMW lineup.

I will have a tough time going back to BMW and the current F15 if the drive, ride, and connection to the road does not change.

In a year, I will be looking at other brands if BMW does not change their vehicles to allow options to restore the older BMW contact with the road feel....
+ More »
people found this helpful.
Was this review helpful to you? Yes
USED PRICE RANGE
$9,950 - $27,998
Browse Used Listings
in your area
8.0
Overall
Expert Rating
Rating breakdown on a scale of 1 to 10?
Compare the 2013 BMW X5 against the competition
Compare All Cars
Looking for a different year of the BMW X5?
Read reviews & get prices
The Car Connection Daily Headlines