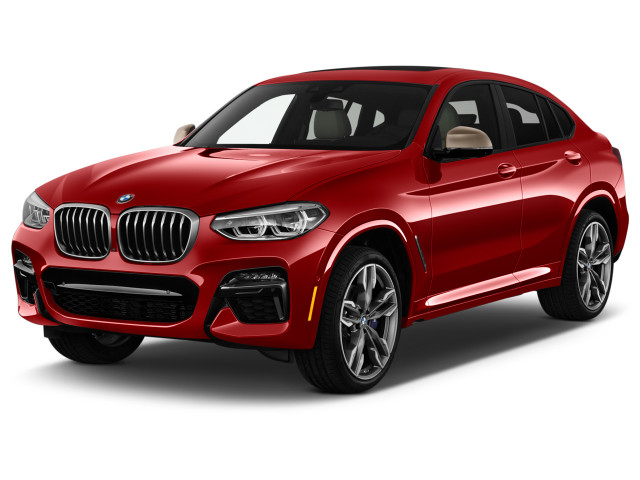 Though the base xDrive30i checks all the right boxes, our hearts wander to the powerful and grippy X4 M40i.

The 2021 BMW X4 is a crossover worth coveting, though our money would be on the more practical, cheaper, and really not much different X3.

The BMW X4 is a crossover SUV that trades some practicality for swagger. It’s a direct rival to the Mercedes-Benz GLC-Class Coupe and the Land Rover Range Rover Evoque, plus we’d shop it against the Porsche Macan and Alfa Romeo Stelvio.

For users who emphasize sporty looks and styling over the ability to haul—both physically and metaphorically—the X4 is a good choice. We give it a TCC Rating of 7.0 out of 10, while we give a higher score to the related and nearly identical X3. (Read more about how we rate cars.)

For 2021, the X4 largely stands pat, though more driver assistance tech is standard and Android Auto compatibility is added to its roster of equipment.

The X4 is all X3 until its roofline starts sloping behind the front passenger compartment. That plunging line cuts into head and cargo room, though it does create a more interesting tail than the comparatively workaday X3. Inside, the two crossovers have identical, well-organized dashboards. You’re more likely to find an X4 with an expressive interior hue on a dealer’s lot, too.

The X4 lineup comes standard with all-wheel drive. The base xDrive30i is a good choice with its 248-horsepower 2.0-liter turbo-4, but the M40i fits the bill better with its 382-hp 3.0-liter turbo-6, one of our favorite engines. The X4 M ups the turbo ante with as much as 503 horsepower with the optional Competition package. It’s thrilling, and priced to match.

No matter the engine underhood, the X4 boasts a compliant ride and good handling for a higher-riding crossover. It’s no match for the related 3-Series, but the gap is narrowing. In M editions it’s ferocious and stiff, but still within the bounds of street-drive comfort.

The X4 is slightly more spacious inside than the 3-Series in most regards, but don’t expect real crossover utility. At least its furnishings match the hefty price tag, and high-tech features like a digital instrument cluster and motion controls for the audio system add to its appeal.

Fuel economy is just so-so. Expect around 25 mpg combined from the base car but as low as 16 mpg combed from the X4 M.

The X4 is a stylish crossover SUV, though it won’t appeal to everyone.

The X4 shares its front end and its front doors with the X3, but its sloping roof has more in common with the bigger X6. It’s not a look for every driver, though many will appreciate its attention-grabbing style. We rate it at 7 out of 10 overall.

Base cars can look rather dull even with the standard 19-inch alloy wheels, so plan to spend extra for some of the M Sport package that’s standard otherwise. It tosses out chrome and unpainted trim in favor of blacked-out details and body-color lower panels.

Inside, the X4 is rather ordinary. The interior is laid out well, if light on flair. At the very least, skip the bland beige and black hues for something more evocative—we’re partial to Tacora Red leather.

In the right configuration, the X4 is a track-ready crossover SUV.

Yes. Unlike the X3, every X4 comes standard with all-wheel drive.

The base X4 xDrive30i is plenty energetic with its 248-hp 2.0-liter turbo-4, which is paired with an 8-speed automatic transmission so intelligent that you may find yourself digging through the glovebox looking for its Mensa card.

Based on this configuration, the X4 range scores a 7 out of 10 for performance.

The zippier X4 M4i could score even higher with its 382-hp 3.0-liter turbo-6, which zips to 60 mph in just 4.4 seconds. The X4 M uses a tuned version of this engine to put out 473 hp in base configuration or 503 hp with the costly Competition package. M versions pack plenty of thrust in any driving situation, and 0-60 mph times of well below four seconds.

All versions ride on firmer suspensions than you’ll find in a base X3, so plan accordingly if you live where roads are rutted. Handling is excellent no matter the version, and slipped into sport mode the X4 M Competition in particular will impress on a closed course.

Rear-seat riders and cargo pay the price for the X4’s attention-grabbing styling.

The X4 has a well-appointed interior with great comfort for front passengers, but cargo space is just OK and rear-seat riders will want to duck their heads and tuck in their legs.

We rate the X4 at 7 out of 10 for its comfort. It’s about on par with a similar sedan in most ways.

Front seats offer as much as 14-way power adjustment and a good view out. Rear-seat riders have around 36 inches of leg room, though in practice it doesn’t feel that spacious thanks to fairly small rear doors and a roof line that may have taller passengers brushing the headliner.

Cargo space stands at 17 cubic feet, though a fair amount of that is above the window line and will block your view rearward. At least BMW offers convenient attachment points for roof racks its accessories division sells.

Interior fit and finish tops some cars costing twice as much, and the optional leather hides have a soft, durable feel.

Government and independent crash testing has not been performed on the 2021 BMW X4, and we wouldn’t hold our breath waiting. Still, it’s nearly identical to the X3, which rates a 9 here.

Every X4 comes standard with automatic emergency braking, active lane control, and a slew of airbags. Adaptive cruise control is optional and bundled in a pricey—but worth it—package that includes sensors that can start, stop, and even steer the vehicle on some roads to help reduce driver fatigue. It’s not full hands-off, but it’s a stress reducer.

New BMW X4 for sale near

The BMW X4 is well-equipped from the start and it offers a wide range of option packages.

Which BMW X4 should I buy?

The BMW X4 trades practicality for sporty handling and looks, so while the base xDrive30i may tempt with a $53,000 or so price tag, a moderately-optioned X4 M40i strikes us as the better buy here.

Overall, we rate the range at 9 out of 10 thanks to a comprehensive 4-year/50,000-mile warranty, good standard gear and options, and a touchscreen that even offers convenient gesture controls.

The M40i runs about $63,000, though we’d add the Premium Package for its head-up display, gesture control, and heated seats/steering wheel plus the Driving Assistance Professional Package for its fatigue-reducing active safety gear. Toss in real leather rather than synthetic and budget at least $550 for a paint hue other than white. Even with a few more niceties, you’ll be spending about $70,000, which is a lot of money—but the X4 M40i is a lot of crossover SUV.

The BMW X4 is powerful, but not especially thrifty.

Don’t look for a hybrid version of the X4. The frugal choice here is the xDrive 30i, which slurps down premium unleaded at a rate of 23 mpg city, 29 highway, 25 combined according to the EPA.

That’s a 5 on our scale. Other versions would rate lower.

Be the first one to write a review on 2021 BMW X4
Rate and Review your car for The Car Connection! Tell us your own ratings for a vehicle you own. Rate your car on Performance, Safety, Features and more.
Write a Review
$51,600
MSRP based on xDrive30i Sports Activity Coupe
Change Style

Model
Trim
See Your Price
7.0
Overall
Expert Rating
Rating breakdown on a scale of 1 to 10?
Compare the 2021 BMW X4 against the competition
Compare All Cars
Looking for a different year of the BMW X4?
Read reviews & get prices
Related Used Listings
Browse used listings in your area
See More Used