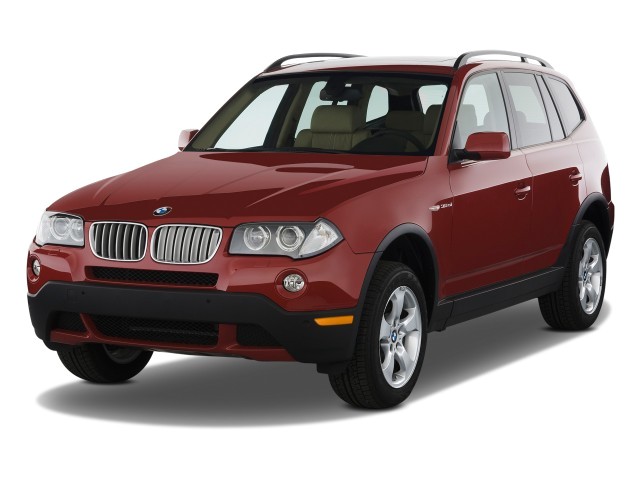 Not completely sold on the X3? Take a look across the lot at the 3-Series wagon, which TheCarConnection.com thinks is a lot more fun to drive.

The 2009 BMW X3 is a more rugged alternative to a sport wagon—but it’s not nearly as much fun to drive.

The 2009 BMW X3 is the German automaker's compact crossover SUV. It's assembled in South Carolina. It's a rival for vehicles like Land Rover LR2 and Acura RDX, as BMW's entry-level off-roader.

When the BMW X3 first hit the streets in 2004, it had a harsh ride and wasn't as refined as BMW's cars; also, it simply didn't live up to the quality standards we'd come to associate with the German automaker. Today, however, the 2009 BMW X3 far outperforms that original effort, but it's not completely well conceived.

The X3 is powered by a 3.0-liter inline-6 that puts out 260 hp. A 6-speed manual and all-wheel drive come standard; a 6-speed automatic is a no-cost option. The X3 has strong acceleration and is very responsive with either transmission, but it doesn't provide the sharp steering and balanced handling expected from BMW's cars. Ride and handling still take an SUV set, though the jittery, harsh ride has gotten more calm.

The interior of the BMW X3 is tight. Front-seat passengers sit on supportive, comfortable seats and have plenty of space, but adults in back may find their knees mashed up against the front seatbacks. The interior now offers adequate small-item storage, and interior styling is somewhat like that in BMW's 3-Series cars, graced by touches of wood.

The NHTSA hasn't tested the X3, but the IIHS calls it a Top Safety Pick. Rear-seat side airbags can be ordered.

The 2009 BMW X3 is a decent-looking vehicle, but its exterior styling cues no longer match those of BMW’s latest cars.

Experts at TheCarConnection.com find that the 2009 BMW X3 definitely looks like a BMW--but it's missing a sense of newness and excitement.

The BMW X3 was given refreshed styling in 2007, but since then, it has seen few styling changes. Motor Trend likes the "freshened visual athleticism" of its current shape. Overall, Edmunds finds the X3 has an "athletic personality." Cars.com thinks the X3 is smaller than the RDX, and dubs it "aging."

Conclusion The 2009 BMW X3 is a decent-looking vehicle, but its exterior styling cues no longer match those of BMW's latest cars.

With some reservations, reviewers are quite positive about the driving experience in the BMW X3.

Standard in the 2009 BMW X3 is a 3.0-liter inline-6 that spins out 260 hp, says Edmunds. Cars.com dubs the engine "potent" and reports it gets "much stronger at higher revs." Edmunds reports it "always has plenty of smooth thrust on hand." MSN Autos contends it issues "immediate engine response." Motor Trend says it has strong low-end torque, and that helps it hit 60 mph in 6.9 seconds.

BMW offers a 6-speed manual or automatic. MSN Autos praises its automatic as "responsive" while Cars.com found it "bogged down in lower gears," which made for "bursts of unsolicited power."

As for gas mileage, the automatic X3 is rated at 17/24 mpg. The manual X3 just gets 1 mpg less, according to Edmunds.

Handling in the 2009 BMW X3 is almost universally praised. A key feature in the 2009 X3 is an all-wheel-drive system closely connected to the X3's stability and traction control. Motor Trend says the system "allows the driver to choose a higher threshold of wheelslip."

Cars.com says the X3 has "top-notch" handling and "more road feel" than in some passenger cars." Edmunds likes the "ultra-communicative and precise steering" while MSN Autos says it's among the "sharpest-handling SUVs." Additionally, the "X3 readily swallows mile after mile," reports MyRide.com. The reviewer goes on to note that "it feels confident in the wet."

Cars.com calls the brakes "surefooted at their limits", though it finds the brake pedal feel "is on the grabby side." Edmunds, meanwhile, proclaims that the 2009 BMW X3 has "strong" brakes.

The 2009 BMW X3 is comfortable—if you’re sitting in front—and materials and build quality are up for debate.

Experts at TheCarConnection.com love the comfort and quality inherent in a 2009 BMW X3. Even picky drivers should be pleased.

Reviewers are mixed on the front seats of the 2009 BMW X3. ConsumerGuide reports that the "seats lack sufficient padding" and the telescoping steering wheel "may not offer enough reach." Edmunds finds comfort and support in the "firm, well-shaped seats". ConsumerGuide finds "good legroom and ample headroom."

The rear seats of the 2009 X3 get fewer good reviews. MSN Autos finds room for five is cramped because "X3 is a little narrow."

Reviewers are also divided on the materials and build quality of the 2009 BMW X3. MyRide.com calls the cup holders "an afterthought." ConsumerGuide feels some interior trim bits aren't "as rich as they should be." Edmunds thinks the cockpit is "well thought out."

ConsumerGuide likes the engine's "classy growl." Wind noise is a concern for MyRide.com.

The 2009 BMW X3 is a good pick for those prioritizing safety.

The 2009 BMW X3 hasn't yet been rated by the federal government in crash tests. Insurance industry tests, however, are quite good, and the abundance of safety features means that experts at TheCarConnection.com rate the X3 highly for safety.

The BMW X3 has not yet been crash-tested by the NHTSA. Fortunately, however, the 2009 X3 earns an IIHS Top Safety Pick award.

Visibility in the 2009 BMW X3 is good overall. "Outward visibility is excellent," observes Cars.com, which says that getting a feel for the BMW X3's four corners is fairly easy.

Used BMW X3 for sale near

The 2009 BMW X3 piles on the features, but the interfaces aren’t as friendly as they could be.

Reviewers assess the 2009 BMW X3's long list of features, most of which, with the exception of the navigation system, are easy to use.

Navigation is optional on the 2009 X3. However, Cars.com thinks it's "a bear" Many drivers will pass up on the system and those who don't will encounter some frustration.

The BMW X3 offers options in packages, including a cold-weather, a sport, and a sport-activity package.

Conclusion The 2009 BMW X3 piles on the features, but the interfaces aren't as friendly as they could be.

Be the first one to write a review on 2009 BMW X3
Rate and Review your car for The Car Connection! Tell us your own ratings for a vehicle you own. Rate your car on Performance, Safety, Features and more.
Write a Review
Browse Used Listings
in your area
7.8
Overall
Expert Rating
Rating breakdown on a scale of 1 to 10?
Compare the 2009 BMW X3 against the competition
Compare All Cars
Looking for a different year of the BMW X3?
Read reviews & get prices
Related Used Listings
Browse used listings in your area
See More Used
The Car Connection Daily Headlines