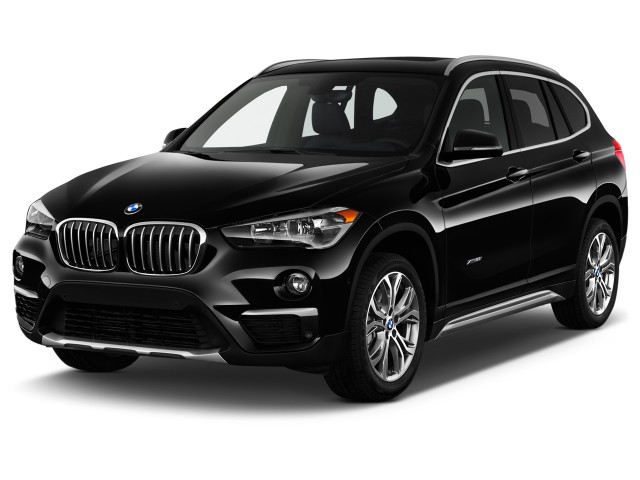 Limit options to keep the price with within reason—we think the Luxury package and sliding/reclining seats are prudent choices.

The 2016 BMW X1 is heavy on sport and light on utility -- a combination that's likely to please a number of buyers.

The redesigned 2016 BMW X1's greatest accomplishment might be looking pretty much like a crossover. To many observers, the previous model's weakest point was a distinct resemblance to a hatchback. By contrast, the new X1 emphasizes added height—it's almost two inches taller—with styling tricks like the placement of headlights and taillights in the top corners of the front and rear fascias. An extra inch of width and a track that's two inches wider also give the X1 a more aggressive stance.

The BMW X1 comes in just one trim level this year—xDrive 28i—and a single all-wheel drive powertrain with a turbocharged 2.0-liter inline-4. It makes 228 horsepower and 258 pound-feet of torque, and is paired with an 8-speed automatic transmission that has three drive modes and paddle shifters. According to BMW, it will accelerate to 60 mph in 6.3 seconds.

A BMW should be fun to drive, and the X1 fulfills that mandate with a gutsy motor, quick steering, and agile handling. You won't mistake it for a 3-Series, but performance is excellent for a crossover.

There's plenty of room for four adults, with ample headroom all around and good legroom, especially with an optional reclining/sliding rear seat that has five inches of travel. Width still isn't a strong point, though, so you shouldn't think of this as a five-passenger car unless three of those passengers are children.

BMW responded to another complaint—limited cargo room—by upping volume whether the 40/20/40 rear seats are up (3 extra cubic feet) or down (7 more cubic feet). Space now maxes out at 58.7 cubic feet. This beats other compact crossovers that also emphasize style over utility, but falls far short of the space you'd find in a mainstream crossover like the Honda CR-V.

BMW defines the X1's segment narrowly, with a handful of upscale niche competitors like the Range Rover Evoque and Audi Q3. In reality, though, with a starting price in the mid-$30,000s, the X1 faces a startling array of premium competitors like the Acura RDX and Volvo XC60, and—perhaps—even highly optioned mainstream alternatives like the Ford Escape Titanium.

Some of those competitors might look more attractive when compared on a feature-for-feature basis. BMW builds the X1 to an aggressive price point and standard equipment tends to be sparse. When notable features on a base-spec upscale car include unremarkable amenities like power front seats and imitation leather, you know you'll be spending a least a few thousand dollars on options to bring it up to the luxury level.

With the right packages—Luxury, Premium, and Technology—an X1 can feel almost lavish. The Luxury package brings leather seats and wood or aluminum trim; you can add features like a panoramic roof and LED headlights with the Premium package; and the Technology package adds extras like navigation and a head-up display. BMW is adding an M Sport package later in the year with sport-tuned transmission and suspension, and sport seats.

It's possible to order options à la carte, too. Splurge on a 12-speaker Harman Kardon sound system, or improve comfort and versatility with a sliding/reclining rear seat for just a few hundred dollars.

The IIHS has given the X1 top "Good" scores in every category except for the notoriously difficult small overlap crash rating, where it scored a concerning "Marginal" rating. Federal safety officials didn't test the last-generation X1 and they are unlikely to test this one.

The X1 manages decent fuel economy figures after ditching the corporate inline-6. The turbocharged inline-4 manages 22 mpg city, 32 highway, 26 combined, according to the EPA. Those figures are hardly tops among its class, but they are improved over last generations.

The 2016 BMW X1 has its work cut out for it in the image department. The outgoing X1, after all, struggled to establish its credibility as a crossover with styling that looked more like a hatchback than an SUV to most observers.

New exterior design addresses this criticism with an emphasis on height—the 2016 BMW X1 is almost 2 inches taller. The X1 also gains a more aggressive stance with an extra inch in width and a track that's two inches wider. It works: You no longer have to squint optimistically to see a compact crossover in an X1's lines. Headlights and taillights set high in the corners of the front and rear fascias only add to the effect.

The interior has a smart look, with seat design that would be at home in a much more expensive car. Dashboard styling is au courant, particularly with an optional, 8.8-inch touchscreen mounted atop a center console that's festooned with much-appreciated buttons for audio and climate systems.

There's only one engine at launch, but the gutsy turbo-four is quick and efficient.

The 2016 BMW X1 comes with just one drivetrain: an all-new turbocharged 2.0-liter inline-4 rated for 228 horsepower and 258 pound-feet of torque. It's mated to an 8-speed automatic transmission with comfort, sport, and eco modes, and paddle shifters. BMW claims 0-to-60 mph acceleration of 6.3 seconds, and that feels about right to us.

The fact that the X1 barely qualifies as a crossover works in the favor of its on-road performance. Simply put, it's fun to drive. Electric speed-sensitive steering is quick and communicative, braking is good, and you can hustle the X1 through corners at un-crossover-like speeds. We found that the transmission stubbornly resists downshifting during uphill acceleration from low speeds with moderate throttle, but flipping into sport mode solves that problem.

A test drive along mountain roads beset by detritus from a series of landslides gave the X1 a chance to demonstrate its SUV-lite capabilities. Good ground clearance proved especially useful in this approximation of real-world obstacles an X1 owner might actually encounter. We did lose traction, though, in a few gravel-strewn apexes taken at speeds that seemed reasonable, and this somewhat diminished our confidence.

Passenger space is good for four, and there's more cargo room this year, but utility still isn't a strength.

The 2016 BMW X1 is built to an aggressive price, and while none of the interior materials looks or feels cheap, some look and feel cheaper than you might expect in a premium vehicle. Sophisticated seat design and color combinations, however, have a decidedly premium vibe. We were impressed by the matte-finish wood trim and contrasting stitching in our test car.

There's plenty of head room all around, and surprisingly generous leg room for rear passengers. This is especially true with an optional sliding/reclining 40/20/40 seat that offers up to 5 inches of travel. Width is, however, in somewhat short supply and three adults won't want to spend much time in back.

Cargo space of 27.1 cubic feet is 3 cubic feet more than the outgoing X1. With the rear seat folded, you get 58.7 cubic feet. It's an improvement, obviously, and better than an Audi Q3 or Range Rover Evoque, but still far short of the room you'd get in a mainstream crossover like the Honda CR-V or Toyota RAV4.

The rearview camera is still an option—as are most other driver assists—and the BMW X1 hasn't been crash-tested yet.

Federal safety officials haven't tested the X1 in the past, and they aren't likely to change their practices with the 2016 model based on its relatively low sales volume. The IIHS has given last year's X1 top "Good" scores in every category except for the notoriously difficult small overlap crash rating, where it scored a concerning "Marginal" rating.

Used BMW X1 for sale near

There are lots of appealing features, but they're bundled in option packages that can make an X1 very expensive.

With a starting price in the mid-$30,000s, the 2016 BMW X1 isn't lavishly equipped in base form. At launch there's just one trim level—xDrive 28i—that comes with an 8-speed automatic transmission and all-wheel drive. Standard features include power front seats with driver-side memory, a seven-speaker sound system, a multi-function steering wheel, and leather-like SensaTec (synthetic) upholstery.

Most X1s will probably arrive at dealerships with one or more option groups. The Luxury package adds leather seats and wood or aluminum trim; the Premium package builds on that with features like a panoramic roof, keyless entry, and LED headlights. Heated seats are part of the Cold Weather package, and the Technology package has highlights like navigation and a head-up display. There are also a pair of Driver Assistance packages. An M Sport package with sport seats and exclusive transmission/suspension tuning will become available later in the year.

Stand-alone options include a 12-speaker Harman Kardon sound system, and many features from packages are available à la carte. Perhaps the easiest call to make is the sliding/reclining rear seat that enhances the X1's versatility for just a few hundred dollars.

The BMW X1's rating of 22 mpg city isn't that great, but things improve with a 32-mpg highway rating.

BMW eliminated its 6-cylinder from the X1 lineup, at least for the time being. That leaves a turbocharged 2.0-liter 4-cylinder engine that returns a respectable 22 mpg city, 32 highway, 26 combined, according to the EPA.

It achieves greener performance in a variety of ways. A new 8-speed automatic transmission, for instance, minimizes energy loss with reduced converter slip, while a wider gear spread cuts emissions by lowering revs at higher speeds. The all-wheel-drive system has also been engineered to reduce weight and energy loss. And the Eco Pro mode enables a coasting function that disengages the powertrain when the driver lifts off the accelerator at speeds between 30 mph and 100 mph.

1 Review
5 star
100%
4 star
3 star
2 star
1 star
Rate and Review your car for The Car Connection! Tell us your own ratings for a vehicle you own. Rate your car on Performance, Safety, Features and more.
Write a Review
2016 BMW X1 AWD 4-Door xDrive28i

Just purchased in December 2016. So far it's great. Road noise is a little louder than I would prefer but I turn up the radio and life is good.
people found this helpful.
Was this review helpful to you? Yes
USED PRICE RANGE
$15,750 - $26,950
Browse Used Listings
in your area
7.8
Overall
Expert Rating
Rating breakdown on a scale of 1 to 10?
Compare the 2016 BMW X1 against the competition
Compare All Cars
Looking for a different year of the BMW X1?
Read reviews & get prices
Related Used Listings
Browse used listings in your area
See More Used