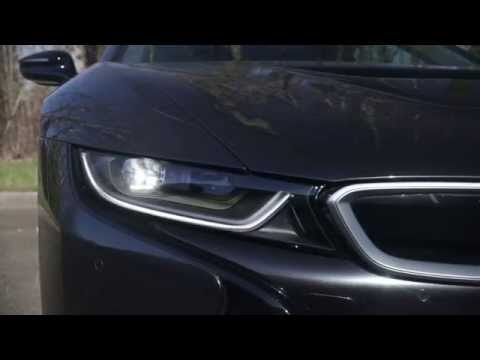 Not that it likely matters to those who will pay $135K and up for a 2014 BMW i8, but note that the small battery pack earns only a fraction of the maximum $7,500 Federal income-tax credit allocated to vehicles with larger packs.

The 2014 BMW i8 is a new kind of sport coupe--an ultra-efficient one with advanced materials, electric and gas propulsion, and a lot more--and buyers will have to recalibrate their idea of what performance means to appreciate it fully.

The 2014 BMW i8 is an oddity indeed in the world of sexy, six-figure sport coupes: It's meant to usher in "a new era of sustainable performance" for the category--though it can be hotly debated whether buyers of those cars really care about fuel efficiency or environmental concerns. Still, the i8's stunning looks will like sell the 1,000 or so allotted to the U.S. in the car's first year. And perhaps it's a subtle way to get people thinking about sustainability: stun 'em with sex appeal, then have a sensible conversation about modest use of resources once they're weakened with lust.

The i8 coupe is actually the second plug-in car from BMW's new 'i' sub-brand, which is about nothing less than reinventing the car for a new era of limited resources, increasing urban density, and the growing number of vehicles that cover some or all of their miles on grid electricity rather than exploding a mixture of gasoline and air several thousand times a minute.

The BMW i8 a two-seat coupe whose doors swing up from the windshield pillars, almost like wings. Its body shell is made of carbon-fiber reinforced plastic (CFRP), and that passenger shell rides on an aluminum chassis that absorbs frontal crash energy and houses not one but two powertrains.

The i8's lines combined elements of traditional BMW, including the twin-kidney grilles at the front, with quite a number of design cues deliberately unique to the family BMW 'i' plug-in vehicles. These include a groove between the upper and lower rear bodywork, blue trim accents, and striking wing-like fins at the rear. All 'i' cars also have unusually tall wheels and tires (20-inch wheels are standard on the i8) to cut aerodynamic drag by narrowing the area of the tire between the car's underside and the ground.

The interior is simple, ultra-modern--almost Scandinavian--but still instantly recognizable as a BMW. The floating instrument pod and other interior features are made of unusual materials, including  fabrics with a high recycled fiber content and veneers from reclaimed woods. Both front occupants sit low, as in any sports car, with the wide, tall tunnel for the battery pack separating them. Most occupants found the thin but highly contoured lightweight seats comfortable, though we await more information from occupants who've driven i8s further than our day's test route.

As for that pair of powertrains: At the front, a single electric motor rated at 96 kilowatts (131 horsepower) and 184 lb-ft of torque powers the front wheels, and delivers all-electric running at speeds up to 75 mph. A liquid-cooled lithium-ion battery pack with usable capacity of about 5 kilowatt-hours--mounted in the tunnel between the seats, giving the entire car a low, sleek profile--powers that front electric motor. While BMW quotes an electric range of up to 22 miles in "Max Emode," we expect an EPA range rating of perhaps 15 miles later in the year.

Then, at the rear, a new 1.5-liter turbocharged three-cylinder engine, rated at 231 hp and 236 lb-ft of torque drives the rear wheels through a six-speed automatic transmission. The same engine is also used in the new 2014 MINI Cooper Hardtop, albeit in a slightly lesser state of tune. In "Max E-mode," the i8 is powered only electrically to the limits of the battery capacity.

After that, it switches seamlessly into its default "Comfort" mode of operating as a regular hybrid--with the engine on when needed, regenerative braking to feed energy back into the battery on deceleration or overrun, and the engine switching itself off when the car stops. In this mode, BMW says, the i8 coupe has a range of roughly 310 miles using both the charged battery and the full capacity of the gasoline tank. BMW also suggests that the blended fuel-efficiency figure will fall higher than 50 miles per gallon, but that figure is based on the much gentler European test cycle. It remains for the EPA to weigh in with both the i8's gas mileage, when running on the gasoline engine alone, and its all-electric range.

It's the high-performance "Sport" mode when things get fun, when the front motor provides electric "boost" to assist the engine. All of the BMW i8's tuning changes in that mode, with the transmission holding lower gears longer and the regenerative braking charging the battery to its maximum capacity if possible, to provide as much capability for that added boost as the car can deliver.

The pair of independent powertrains makes the i8 what vehicle engineers call a "through-the-road" hybrid, with a different power source driving each axle. The two powertrains are coordinated strictly via control software programming when they work together in "Sport" mode to provide all-wheel drive and maximum performance. Along with the three driving modes--Max E-Mode, Comfort, and Sport--all but Sport can be driven under the EcoPro function, which caps acceleration and reduces climate control usage to increase efficiency and range.

After driving a prototype 2014 BMW i8 in the spring of 2014, we're comfortable deeming it as a sports car that's more at home as a touring car than as a track racer. In the end, its looks may well overshadow the innovative materials, advanced powertrains, and light weight that should make it a technology milestone. That's something of a shame, though BMW could well have plans up its sleeve for even higher-performance models.

Among the features offered on BMW i8 cars in some markets are the world's first laser headlights--where they're legally permitted--with LED headlights fitted elsewhere.

Be the first one to write a review on 2014 BMW i8
Rate and Review your car for The Car Connection! Tell us your own ratings for a vehicle you own. Rate your car on Performance, Safety, Features and more.
Write a Review
USED PRICE RANGE
$57,500 - $67,500
Browse Used Listings
in your area
8.4
Overall
Expert Rating
Rating breakdown on a scale of 1 to 10?
Compare the 2014 BMW i8 against the competition
Compare All Cars
Looking for a different year of the BMW i8?
Read reviews & get prices
Related Used Listings
Browse used listings in your area