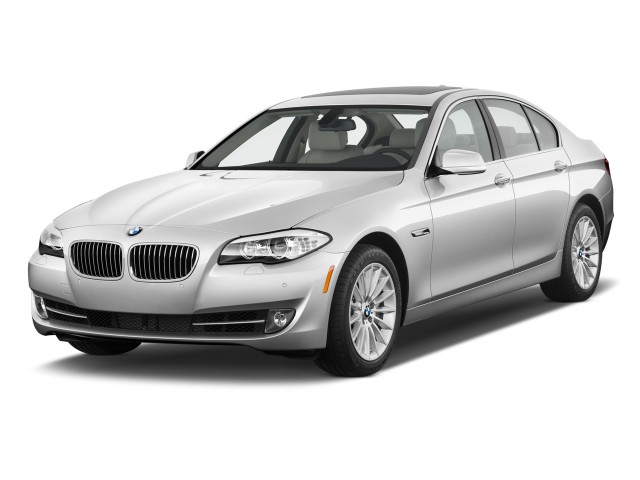 Check with your insurance agent; some of the active-safety options available on the 2011 BMW 5-Series might help earn you reductions on your premium.

The new 2011 BMW 5-Series might be a conservative evolution in terms of styling and design, but it’s a quite radical one with regard to how BMW’s most important model drives.

The BMW 5-Series mid-size sport sedan has been completely redesigned for 2011, and it's more of a driver’s car than the outgoing 2010 5-Series—or most other mid-size luxury sedans—while still upping the technology ante and not forgetting about the comfort and luxury that matters.

There's no wagon version of the 5-Series model this time around; instead, the striking 5-Series Gran Turismo blends some station wagon and SUV cues into a shape that's not quite sedan or crossover. In the Gran Turismo, the elevated backseat space is excellent—limousine-like by most accounts—and the tailgate can be opened in two different ways. Powertrains for the GranTurismo are essentially the same, but a different suspension setup means it doesn't handle nearly as well as the 5-Series sedan.

Despite being predictably conservative with the 5-Series, BMW has made the new model feel a little sportier and more expressive than the 5-Series it’s replacing. When you take advantage of all of the technical achievements that are available with the Sport Package or as options—you don’t have to drive fast or aggressively to enjoy them—you get a true sport sedan that will greatly satisfy you, your passengers, and your inner tech geek.

The 2011 BMW 5-Series is conservative, but it hits the mark in a way that will both please longtime brand enthusiasts and first-time Bimmer buyers.

Thankfully, to many BMW fans in the know, the new 2011 5-Series takes a step sideways with respect to styling and design, letting in more influences from the old E39 5-Series that ran until 2002 and closing the door on some of the more radical design statements made by the outgoing 5-Series. The new 5-Series has a familiar profile, and the overall proportions haven’t changed appreciably, but most notably the Bangle-butt is gone and the front end has more of that classic upright look.

The BMW kidney grille now sits a little lower and more up-front than before, flanked by beautiful new jeweled LED headlamps. Perhaps most notable is the strong lower beltline crease that extends all the way to the back. There’s a good deal of additional expression in other details; the hood is a little curvier, a new taillight design swoops upward at the sides, and the hood itself includes outwardly flowing contour lines.

The new 2011 BMW 5-Series is only an inch and a half longer than the outgoing 5-Series, but the wheelbase is about three inches longer.

Inside, the 5-Series doesn’t exactly have a cockpit layout, but it’s driver-centered while also optimizing spaciousness in front. Major controls and displays are angled six degrees toward the driver, and there’s a rather wide center console that opens wide to store PDAs, iPods, and other precious electronics.

The mother lode of electronics on board will make gearheads wary, yet the new 2011 BMW 5-Series provides a remarkably satisfying driving experience.

Thankfully, the new 5-Series provides a driving experience that's more like that of the older E39 5-Series than the E60 version that phases out with 2010. That outgoing version had been criticized since its inception for having a more isolating driving experience.

The 2011 5-Series is packed with performance-related technologies like Dynamic Damping Control, Active Roll Stabilization, and Driving Dynamics Control—enough to make any serious enthusiast wary. But the driving experience doesn't feel nearly, if at all, as disconnected as those systems might hint. Despite all the onboard electronics and sensors, BMW keeps it real—or at least feeling that way.

The electric power steering in the new BMW 5-Series is the best you’ll find in a sedan its size; it has a great, natural sensation on center and plenty of road feel in tight corners, and there’s none of the disconnected, digital impression that’s present in some other electric power steering systems. Even more confidence-inspiring—and making the 5-Series come across as a smaller, more tossable car—is BMW’s Integral Active Steering, which steers the rear wheels slightly in the opposite direction below about 35 mph, or in the same direction at higher speeds, to either help enhance stability or aid parking.

Initially, the new 2011 BMW 5-Series will be offered in rear-wheel-drive 535i and 550i variants, with the 550i stepping up to a 400-horsepower, 4.4-liter twin-turbocharged V-8 engine (capable of 0 to 60 in about five seconds). Later in the model year, a 230-hp, 528i model with a naturally aspirated 3.0-liter six will join the lineup (though not for the GranTurismo), along with all-wheel-drive (xDrive) variants of each. Powering the 535i—which BMW anticipates to be the most popular model—is a new turbocharged 3.0-liter straight-six engine. With no detectable lag and strong, torquey response even from 1,500 rpm or so, it could be very easily mistaken for a V-8. However, the sound is the only thing that’s lacking; the 535i’s engine neither sings like BMW’s naturally aspirated sixes nor sounds as authoritative as its V-8s. Manual or automatic transmissions are offered on all 5-Series sedans—in a class where manuals are sometimes limited to the sportiest variants. Fuel economy ratings are as high as 18 mpg city, 28 highway for the base 528i, but V-8 and GranTurismo models aren't nearly as impressive.

You won't entirely be able to escape those electronics, though. Driving Dynamics Control in the 5-Series gives you four settings—Comfort, Normal, Sport, and Sport+—and it affects throttle response, steering assist, and transmission shift points, as well as the performance of these active suspension systems, so there’s a dramatic difference in overall feel just from Comfort to Sport. Sport+ allows a separate mode that some might appreciate for track driving. Simply put, in the Normal or Sport modes, you can enjoy the driving experience without flustering your passengers too much.

The 5-Series sedan’s interior appointments and cargo space are impressive, but it’s the limo-quality backseats and smart cargo versatility in the 5-Series GranTurismo that stand out.

Although the 5-Series is definitely a sport sedan, it’s first and foremost a luxury sedan—one that places a tremendous emphasis on technology. The instrument panel has also been re-contoured, with some more expressive creases that flow through to the door trim. Front seats are as comfortable and supportive as we’ve come to expect from BMW, with extendable lower cushion supports for taller drivers (like this one) and an excellent driving position overall.

Weaknesses? There are few, but backseat space remains one. There’s simply not as much useful legroom as in most rivals this size, and the back of the front seat has a hard-plastic pocket. BMW 5-Series GranTurismo models are an exception; with a slightly elevated backseat, lots more legroom, and plenty of headroom—plus a great view out—the GT is an ideal choice for shuttling around adults.

While the 2011 BMW 5-Series provides a large impressive trunk, the GranTurismo also wows with respect to cargo. With a two-piece tailgate that can be opened and configured in several different ways, the GranTurismo provides some of the benefits of a wagon without the station wagon look.

The interior of the 5-Series is impressive, with good-quality, tactile switchgear. But the iDrive interface still remains the center point of the dash; you'll need it to access many vehicle functions, but the 5-Series benefits from the fourth-generation system that was introduced for 2010 on the 5-Series—including a much-improved menu structure and hot buttons for main-menu categories. Simply put, iDrive has finally reached its potential in being a relatively intuitive interface that might not be as easy as buttons to some, but you probably won’t need to read manuals to digest and use it on the fly.

In the 535i Gran Turismo and 550i GranTurismo models, we're a fast fan of the limo-like rear seats and the flexible cargo area. Fitted with two rear seats and a console, the 5-Series GT does a convincing impression of a first-class cabin, depending on the airlines you frequent. The seats can be reclined, heated, ventilated, and stimulated with massaging functions. Only the Mercedes-Benz R-Class and Lincoln MKT approach its second-row seat comfort, and neither performs as capably.

And the GranTurismo’s cargo layout is just plain cool. When the seats fold forward, panels that separate passengers from cargo can be opened for quick and easy access to luggage. From another angle, the Gran Turismo lets you load in cargo through a trunk-like opening, or open the whole tailgate to expose a package shelf and seatback that both move out of the way when Costco gets too tempting.

Thanks to great handling and a host of technologies, the 2011 BMW 5-Series offers very strong accident-avoidance abilities.

The 2011 BMW 5-Series hasn't been crash-tested by either NHTSA (National Highway Traffic Safety Administration). And since it's been completely redesigned, with an all-new structure compared to the outgoing version, any previous crash-test results wouldn't apply. However, the IIHS (Insurance Institute for Highway Safety) has released its verdict--and it's awarded the 2011 5-Series sedan its Top Safety Pick designation.

That said, the BMW 5-Series has a reputation for being strong in the safety features area. The 5-Series came with stability control long before most vehicles offered it, and BMW has perfected this feature so that it will intervene unobtrusively and only when necessary.

In addition to the usual roster of airbags, rear side bags are optional, and the 5-Series has a number of high-tech safety extras. The brakes now have composite front rotors, and electronic aids such as Brake Fade Compensation, Brake Standby, and Brake Drying help performance in certain situations. Other items on the 5-Series' long options list include an Active Blind Spot Detection, a Lane Departure Warning system, Xenon Adaptive Headlights with automatic high beams, and a new second-generation night-vision system with pedestrian detection.

Used BMW 5-Series for sale near

If you're willing to spend some extra money on the 2011 BMW 5-Series, you'll find plenty of tech wizardry or traditional luxury-car comforts.

BMW has long equipped its vehicles somewhat modestly for the luxury class, but offers plenty of opportunities to both make the interior and appearance more lavish and flamboyant, as well as innovative high-tech conveniences.
Rain-sensing wipers, power heated mirrors, and a dual-zone climate control system are all included, even on the base 528i, as is poplar wood trim and a synthetic leatherette upholstery. Softer Dakota leather is offered with a Premium Package, while a potentially bewildering list of possible options can bring you anything from upgraded audio, HD radio, heated rear seats, a navigation system, a rear sunshade, or one of many available trims. A Sport Package or M Sport Package provide a sport suspension, upgraded wheels and tires, and other extras.
Also, BMW will offer a sonar-based Parking Assistant feature for the first time in the 2011 5-Series, and the backup camera system includes new Top View and Side View functions aimed at spotting driveway or parking-lot obstacles. A new Active Cruise Control with Stop-and-Go—capable of adjusting speed to traffic and bringing the vehicle to a complete stop for up to three seconds before needing driver input—will be optional. Other highlights include a new night-vision system.
Later in the model year, the 2011 5-Series will also have an auto-park feature, sonar-based and for parallel parking only. The driver can touch the brake and accelerator during the process, and the system will be offered with manual or automatic transmissions.

1 Review
5 star
4 star
100%
3 star
2 star
1 star
Rate and Review your car for The Car Connection! Tell us your own ratings for a vehicle you own. Rate your car on Performance, Safety, Features and more.
Write a Review
For 2011 BMW 5-Series

This car spoke to me from day 1

8.8
Overall
Expert Rating
Rating breakdown on a scale of 1 to 10?
Looking for a different year of the BMW 5-Series?
Read reviews & get prices
Related Used Listings
Browse used listings in your area
See More Used