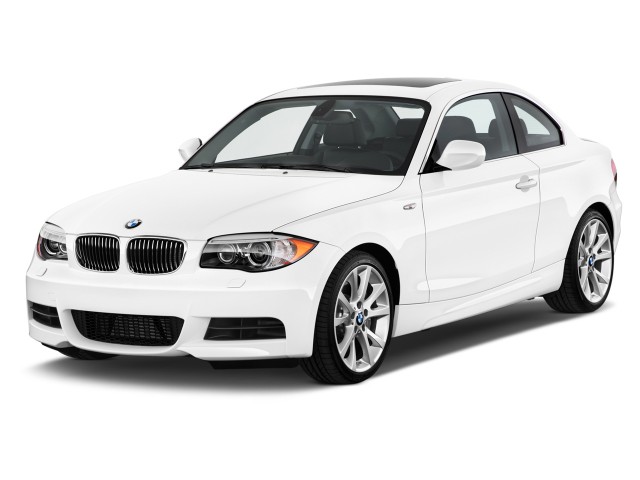 The M Sport package is a great upgrade to either model in the 1-Series range, but it's a must on the sportier 135i.

If you can get past the often-confusing iDrive system, the 2012 BMW 1-Series offers a great blend of style, power, handling, and luxury at a sometimes reasonable, sometimes objectionable price.

BMW's smallest offering in the U.S., the 1-Series, carries forward into 2012 with a few tech upgrades but otherwise unchanged fundamentals, including its pair of engines and trims. That's not a bad thing, however, as the 1-Series continues to be one of the most impressive entry-level luxury sports cars on the road.

Both of the non-M models share similar styling, and are available in coupe and convertible form. The styling is crisp and clean, with the 135i showing a little more sport and aggression in its basic configuration, but the overall impact of the 1-Series' look has a tendency to fall into love-it or hate-it classification for many. Inside, the 1-Series can be a bit drab, with a functional but simple dash and center stack, a predominantly black finish in base trim, and perhaps more plastic than you'd expect in a luxury car, but upgrades and custom elements can change this--for a price.

Comfort inside the 1-Series is generally good, though the back seat is very tight for adults. The front seats are well-bolstered and offer fair head and leg room, though some may find the seats too well-bolstered. Controls can be over-abundant and confusing, but once learned, BMW's system makes logical--if not intuitive--sense. Storage space in the cabin is somewhat limited, but the trunk is decently sized.

Power is never short in the 1-Series, with the 128i generating 230 horsepower from its naturally-aspirated 3.0-liter in-line six-cylinder engine. The 135i adds a twin-scroll turbocharger to boost power to 300 horsepower. The 1-Series M Coupe outranks both, with sizzling performance from its two turbos and 335 horsepower. Both of the standard 1-Series models are fun, quick cars, with sharp reflexes balanced against good ride quality. An optional M Sport package can sharpen both the appearance and the handling. The 128i is available with either a six-speed manual transmission or a six-speed automatic, while the 135i can be had with a seven-speed dual-clutch in place of the automatic.

Features abound in the 1-Series, a BMW strong suit that's in full effect here despite the entry-level positioning. From BMW's iDrive infotainment system to high-end leather and wood interior upgrades, parking sensors to heated seats and steering wheel, there's something for almost everyone, particularly lovers of luxury. Many options are available a la carte, but some are grouped into packages; one thing to be aware of is that the 128i's $30,000 base price can quickly rocket into the mid-$40,000 range or higher with extensive upgrades.

Safety is no sweat for the 1-Series, though the NHTSA and IIHS haven't rated the 2012 model. Standard safety equipment includes: advanced front and side airbags for driver and passenger; front and rear head protection systems; pre-tensioning safety belts; anti-lock brakes; a crash sensor that shuts off fuel flow, kills the engine, and unlocks the doors; and a computer system that integrates deployment of both active and passive safety systems when it senses a crash. Optional safety extras include an anti-theft alarm system, rear parking sensors, xenon headlights, automatic high-beams, and BMW Assist roadside assistance services.

The 2012 BMW 1-Series might not wear its exterior as gracefully as larger BMWs, but its interior is attractive and sleek.

The 2012 BMW 1-Series was introduced to the U.S. four years ago, and continues to wear its compact sporty styling well after a mild update in 2010. With a long hood and short deck like the slightly larger 3-Series, the smallest of the American BMWs looks like it belongs.

It's perhaps too stubby and compact to wear the BMW family curves with real elegance, however, though many will find its slightly pug-like look endearing. The coupe is somewhat more balanced than the convertible, which looks best with the top down; the soft top isn't precisely ill-fitting when up, but it doesn't flow with the otherwise smooth lines.

In the case of the ActiveE electric version of the 1-Series, the look is largely the same as the gasoline burning models, though a slightly more aerodynamic front end, wheel design, and unique ActiveE graphics package mark it out as the electron-sipper.

Inside, the 1-Series is very much like the entry-level members of the 3-Series family, with soft-touch plastic and rubber, metallic trim accents, available leather seating, and a generally purposeful, if somewhat plain, motif.

The 2012 BMW 1-Series is a pleasure to drive, regardless of model, but is especially enjoyable with the turbocharged engine.

For 2012 the BMW 1-Series is available in two primary versions: the 128i and the 135i. Last year's limited-edition 1-Series M Coupe is still available in limited amounts, but is a 2011 model.

The 128i is powered by a 3.0-liter normally-aspirated inline six-cylinder rated at 230 horsepower. All 1-Series models are rear-wheel drive, available with a choice of six-speed manual or six-speed Steptronic automatic transmission (128i) or seven-speed dual-clutch transmission (135i).

The 135i is powered by a turbocharged 3.0-liter inline six-cylinder rated at 300 horsepower and 300 pound-feet of torque. Acceleration with the 135i is brisk, hitting 60 mph in just 5.3 seconds with the dual-clutch transmission. An available M Sport package further enhances performance with improved suspension calibration, aerodynamics, and larger wheels and tires, plus a host of comfort and aesthetic upgrades.

On the street, the 1-Series is impressive, handling with balance and poise, a noticeable but not excessive amount of body roll, high overall grip, and ready acceleration. The 135i sharpens all of these, particularly the acceleration. Braking is also a strong suit, stable and straight, though without upgraded brakes, track duty will quickly cause heat soak and fade--a standard trait of most road cars.

Integrated stability and traction control systems are not overly invasive, allowing a fair amount of aggressive driving without stepping on the driver's inputs.

Excellent build quality and materials mark the 2012 BMW 1-Series as a true luxury car, but its compact size means a snug interior.

Whichever version of the 1-Series you're looking at, the key descriptors of its interior are "attractive," "comfortable," and "easy to use." Laid out like 2+2s more than true four-seaters due to the small back seats, there's plenty of comfort up front for adults, with children the only real candidates for the rear seat.

A pass-through split-folding rear seat offers more cargo space for longer or larger items, while the trunk itself is fairly roomy, even in convertible models.

Overall build quality and materials are very good, particularly considering the 1-Series' place at the entry point in BMW's lineup, matching the 3-Series and 5-Series in most respects. Slightly lower-grade leather and plastics in some areas are the primary concessions. Cabin noise is low, with wind and road noise well-controlled, even in the convertible.

On-road comfort is good, depending on the performance options chosen; low-profile tires on large wheels can create more ride harshness, but even at the sportier end of the spectrum, the 1-Series is a controlled cruiser.

Outfitted with the standard regimen of modern safety features, the 2012 BMW 1-Series inspires confidence despite the lack of official crash testing.

Like many luxury and sports cars, the 2012 BMW 1-Series hasn't been subjected to crash testing by the NHTSA (National Highway Traffic Safety Administration) or the IIHS (Insurance Institute for Highway Safety), but it's outfitted with the standard regiment of modern safety features.

Front, side, and side-curtain airbags are standard, as are ABS, traction control, stability control, tire-pressure monitoring, and daytime running lights. The thin roof support pillars and generous glass spaces make for good visibility, though rearward sight lines can be blocked by the headrests.

Used BMW 1-Series for sale near

A sound base specification and a long list of available options means the 2012 1-Series won't leave you wanting, but it may grow significantly in price.

As with any BMW, the base specification for the 2012 1-Series is fairly generous, including Bluetooth connectivity, keyless entry, cruise control, rain-sensing wipers, power accessories, steering wheel-mounted controls, and on the 128i coupe, HD Radio capability.

Optional extras are too numerous to list, but the highlights include navigation, iDrive infotainment system, power-folding cloth top on convertibles, a Premium package that smartens up the interior with high-grade wood trim, eight-way power-adjustable seats, ambient lighting, and more.

The one thing to beware of when outfitting your ultimate 1-Series, however, is how quickly the price tag can rise as the extras pile on.

The 2012 BMW 1-Series isn't the greenest compact luxury car around, but it's not far off the mark.

Though they're not the most efficient cars on the road--or even in their class--the 2012 BMW 1-Series models don't give up much in gas mileage, especially on the highway.

The standard 128i coupe rates 18/28 mpg city/highway with either the manual or the automatic transmissions. The turbocharged 135i scores slightly better, perhaps surprisingly considering its greater power output, rating 20/28 mpg with the manual transmission, though it suffers slightly with the seven-speed dual-clutch, rating 18/25 mpg according to the EPA.

Be the first one to write a review on 2012 BMW 1-Series
Rate and Review your car for The Car Connection! Tell us your own ratings for a vehicle you own. Rate your car on Performance, Safety, Features and more.
Write a Review
USED PRICE RANGE
$15,988 - $15,991
Browse Used Listings
in your area
8.0
Overall
Expert Rating
Rating breakdown on a scale of 1 to 10?
Compare the 2012 BMW 1-Series against the competition
Compare All Cars
Looking for a different year of the BMW 1-Series?
Read reviews & get prices
Related Used Listings
Browse used listings in your area