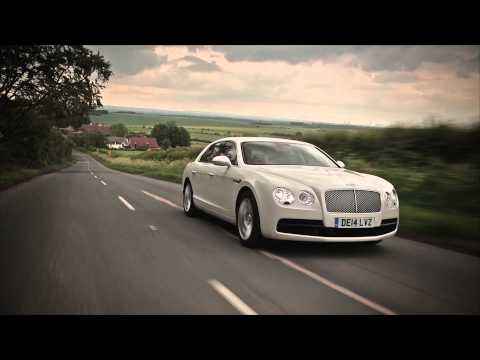 One of the best benefits of owning a Spur is fitting one to your exact specification. Given the choice, we'd spare no expense for Bentley's diamond-quilted leather, knurled metal finishes, and one of the stunning light woods on offer.

The 2015 Bentley Flying Spur reaches peak opulence--and more drivers, with the addition of a new V-8.

The Bentley Flying Spur is a potent symbol of status and wealth. Even $100,000 luxosedans seem a pale imitation of the Spur's quiet opulence. Square foot by square foot, it has as much hand-finished wood and hand-stitched leather as any vehicle on the planet, a perfect companion to its stately presence. Drive one, and it's obvious--you've arrived.

The Flying Spur once was also badged a Continental, but last year Bentley split that lineup of coupes, convertibles, and sedans down the middle. The four-door is just a Flying Spur now, and the renaming draws attention to the more emphatic styling differences between the cars in their current generation.

Pared down of extraneous details--the oval headlamps have no surrounds, for example--the Spur distances itself from the two-doors in subtle way. Those LED lamps are larger outboard than inboard, the opposite of the Conti GT, and the grille stands more at attention. The Spur also takes a more dramatic approach than the Continental; it's more angular and crisp than the two-door version with angular pillars and squared taillights. Between the 8- and 12-cylinder versions, there are some minute differences: W-12 cars have oval exhaust finishers and a chromed grille, with black-background badging, while V-8 cars have red-backed badges, a black-finished grille, and a figure-eight exhaust tip.

The interior of the Flying Spur helped set a standard that is nearly impossible to top. Its fit and finish are unparalleled, and the automaker's range of customizability can make the Flying Spur almost as unique as a fingerprint. Although there are plenty of modern conveniences such as infotainment and connectivity, the big Bentley still reads like a greatest hits of timeless car design inside.

As the most powerful and fastest Bentley sedan ever, the Flying Spur has received plenty of attention under its hood too. Two powertrains are available, which are both turbocharged and not slow. The pricier version is the one the Flying Spur launched with, a 6.0-liter twin-turbocharged W-12. According to Bentley, the powerplant makes 616 horsepower and 590 pound-feet of torque, which when mated to an 8-speed automatic will rocket the four-door up too 60 mph in 4.3 seconds. The second powertrain is new this year, and is a 4.0-liter turbocharged V-8 that makes 500 hp and 487 lb-ft coupled to the same 8-speed automatic. The smaller configuration still nets a 0-60 mph time of 4.9 seconds and a top speed of 183 mph. Despite extensive amount of aluminum in the construction and two more forward gears this year, the W-12 only manages 12 mpg city, 20 highway, 15 combined, according to the EPA. The V-8 does slightly better thanks to standard cylinder deactivation that shuts down half of the engine during extended cruising; the EPA rates that model at 14/24/17 mpg.

Regardless of powertrain, the Flying Spur puts power to the pavement through a standard all-wheel-drive system that starts with a 40/60 torque split, front to back, but can shift up to 65 percent of the power up front or 85 percent to the rear.

To satisfy all the clients in all the places in the world where the Flying Spur appeals--China, America, Russia, Britain--the ride and handling have been tuned for a wider spectrum of behavior ranging from plush to responsive. A standard set of adaptive dampers can alter its ride and roll stiffness for a serene ride or a more sporting feel. Lighter steering and communicative, but grippy, Pirelli P-Zero tires belie the Flying Spur's cornering ability. Set the dampers to firm and dive in to most corners with confidence. Only when the road unkinks do we find that the Bentley is a little less compliant. We've found that V-8 versions, with 300 pounds saved from fewer cylinders on its nose, are more nimble on the road.

Aside from tasteful on-road manners, the Flying Spur has impeccable in-car manners as well. Quiet and tastefully rendered, the Flying Spur's cabin is filled with muted details, and studded with "B" logos, all framing a large LCD screen for infotainment functions that can be controlled by front-seat and by back-seat passengers via remote control. The remote also controls the two 10-inch flat screens buried into the headrests, which speaks to the Flying Spur's clientele that may prefer to be driven in the car, rather than driving it themselves.

The Flying Spur can be specified as a four- or five-seater, with varying levels of creature comforts—relatively speaking, of course. There are 17 available interior leather colors and seven available wood trims, without opting to go all the way and custom-build your order. All four seating positions can be trimmed with 14-way power adjustable, heated and cooled leather seats, and a Mulliner Driving Specification add-on can double down even more: quilted leather, knurled shifter, drilled pedals, and 20- or 21-inch two-piece alloy wheels. An optional 1,100-watt Naim audio system takes the big Bentley up to 11.

Be the first one to write a review on 2015 Bentley Flying Spur
Rate and Review your car for The Car Connection! Tell us your own ratings for a vehicle you own. Rate your car on Performance, Safety, Features and more.
Write a Review
USED PRICE RANGE
$68,998 - $124,888
Browse Used Listings
in your area
8.4
Overall
Expert Rating
Rating breakdown on a scale of 1 to 10?
Compare the 2015 Bentley Flying Spur against the competition
Compare All Cars
Looking for a different year of the Bentley Flying Spur?
Read reviews & get prices
Related Used Listings
Browse used listings in your area
See More Used