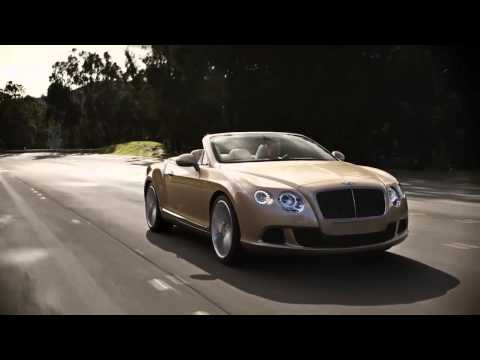 We're not convinced the Naim audio system delivers on its $7000 promise, but we'd upholster our in-laws in Bentley's Mulliner specification if we could.

Perfectly behaved and universally unflappable, the 2013 Bentley Continental GT downsizes into a V-8 future without losing its grip on luxury or performance.

Almost a decade ago, the first modern Bentleys reinvigorated the marque, taking the line from the days of the dusty Arnage and Azure and catapulting it into the world of celebrity with the chic Continental GT coupe and GTC convertible, and the companion Flying Spur sedan.

With awesome performance, all-wheel drive, and unimaginable handling for their size, the Bentley two-doors return once more for the 2013 model year—this time, with a more efficient powertrain available, a new twin-turbocharged V-8 with almost as much horsepower and performance, but markedly better fuel economy, than the W-12 that still defines the Continental lineup.

Last year, the Continental GT and GTC underwent a subtle transformation, a reworking that gives them a more defined appearance while maintaining clear continuity. These well-dressed linebackers may look like sportscars from the side, but from any quarter-view or from either end, their bulk comes into plain view. They're simply massive, though the 2012 redesign trims some of the heft away with deft new folds in the sheetmetal, achieved by superheating aluminum panels and forming them while they're aglow. In coupe form, the Continental's a forward-moving piece of art; the convertible's a more relaxed-looking collection of references to the past. Minor differences tell the W-12 and V-8 cars apart: V-8s have red-enameled badges and a black grille with a vertical spline of chrome, as well as figure-eight exhaust tips and inwardly angled supports on the front air dam.

The Continental sports a modern interior with a classical touch, with traditional materials interlaced with new touches like a large LCD screen. There's no mistaking the automaker responsible for this effort; Bentley logos are stamped into yards of hand-stitched leather, tooled into aluminum, and framed into wood trim—even eucalyptus on V-8 cars, if you like. A Breitling click demands attention in the center of the dash, even if it's not as informative as the LCD just beneath it.

A twin-turbocharged 6.0-liter W-12 has powered both the Continental GT and GTC since the day they were new. Last year, the W-12 was updated to produce 567 horsepower and 516 pound-feet of torque—an increase of 15 and 37 respectively—but still mated to a 6-speed automatic and all-wheel drive. For this year, a Speed edition improves on those numbers further, up to 616 hp and 590 lb-ft, and an 8-speed automatic. According to Bentley, the GT can make the 60 mph dash in 4.3 seconds, the GTC does the same in 4.5 seconds, and the new Speed version hits the mark in just 4 seconds on the way up to a 205 mph top speed—no easy feat for a car that weighs 3 tons.

Predictably, while straight-line acceleration is stunning, fuel economy is abysmal at 11 mpg city, 19 highway, according to the EPA.

To that end, Bentley's future may be in view after this year's addition. A twin-turbo, 4.0-liter V-8 provides motivation in some Continental models, a powerplant borrowed from corporate-cousin Audi. In the GT and GTC, the V-8 makes 500 hp and 487 lb-ft of torque, but it's mated to an 8-speed automatic and standard all-wheel drive that help makes the 60 mph sprint in 4.6 seconds—just a fraction of a tick slower than the W-12 models. While incrementally slower than the W-12 models, Bentley points out that while the V-8 cars are exponentially more fuel efficient—up to 40 percent. At an estimated 18/26 mpg, it can deliver about 500 miles of range on a tank of premium. It helps that the V-8 can shut down half its cylinders under light loads, uses direct injection, reduces internal friction, and has two more forward cogs to help achieve better mileage.

Considering the Continental GT's size and mass, the car has sublime road habits. The standard adjustable shocks can be set into three different modes—with varying levels of firmness—and the all-wheel-drive system's inherent rear-wheel bias means that the Continental is alarmingly willing to press hard into corners. Giant anchors on every corner are ready to arrest the Bentley's motion whenever needed—even without opting for the optional carbon ceramic stoppers, which Bentley says are the most powerful brakes found on any production car. The V-8 sheds about 50 pounds from the front end and we can tell: once you've mentally calibrated for its heft and carrying capacity, the V-8 feels effortless. Scrubbing speed with the optional carbon ceramic brakes is similarly easy, and the Continental takes a set before diving through every corner.

Even though it's supremely appointed and comfortable to drive, the Continental GT isn't all that spacious. Front seat driver and passenger get the best seats, with plenty of support and head room, while rear seat riders aren't afforded the same luxury. Leg and shoulder room are cramped in the rear seat buckets, and we can't recommend the seats for full-size adults for long. Aside from the cramped quarters, the Continental is awash in high-quality materials, from the lush wool carpets and soft hides all the way to the padded pass-through for skis in the rear seat. Like most ultra-exclusive cars with a high pricetag, neither major U.S. safety rating agency has ruined a Continental GT. Aside from official safety data, the Continental GT is fitted with a standard rundown of airbags and anti-lock brake systems, while convertible models add pop-up rollbars for more protection. A long and tall rear end makes the standard rearview camera not only appreciated, but almost mandatory.

The Continental carefully walks the line between modern and classic with plenty of contemporary touches in its handcrafted approach. All Continental models have automatic climate control, navigation, and Blutetooth connectivity. The navigation system displays beautifully rendered Google Maps on an 8.0-inch touchscreen, which is navigation taken to the next level, according to us. Our favorite options: a spendy $7,000 Naim audio system creates studio-perfect sounds, and a Mulliner package with quilted leather, chrome and aluminum trim, and wool rugs transforms the Continental into an astounding luxury sight.