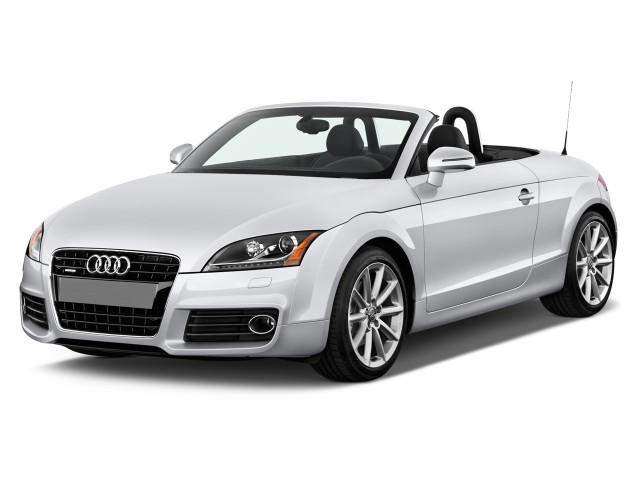 Given the choice of a TT or the TTS, we'd opt for the TTS. It may not be as affordable, but its sporty feel is complemented by a rorty exhaust note and flamboyant styling add-ons.

The 2011 Audi TT straddles the line between sporty cars and true sports cars--or is it the DMZ?

In its short decade-and-some-change on the market, the Audi TT has taken a couple of paths to stardom. At its debut, the TT was a Deco-perfect piece of sculpture, with an instant patina of retro timelessness penned into its ballooned fenders, the baseball-stitched interior, and lots of lovingly integrated circles--in the headlights, in the air vents, in the steering wheel. It didn't matter that its engines were more run of the mill, or that its handling gave up its more pedestrian VW Group roots. It was lovely, and it was truly fun to drive, especially in roadster form.

Then came an about-face: the TT had to grow up and get tougher. For what reasons, no one's really explained. In 2008, it was redesigned to fit in with the rest of the Audi lineup, and the TT lost some--okay, lots--of its distinctive appeal while it chased real sportscars down imaginary straightaways. Zero-to-60 mph times fell, and roadgoing grip rose, and the TT nudged noticeably toward true sportscar territory.

For 2011, the TT is pushing even harder for recognition as a sportscar. The lopey V-6 is gone, and so are the automatic transmissions. Only turbocharged four-cylinders and dual-clutch transmissions are on the drivetrain menu. The TTS still rips out 54 more horsepower through some toying with its wastegate and intercooler--and there's a TTRS model afoot, teased to sportscar fans through Facebook.

There's very little change on the TT's plate this model year, other than some rejiggered option packages and some new interior colors. It's drifting out of the limelight a bit in the second half of its current act, but it remains one of those tossable everyday drivers that tries to keep up with more hardcore machines, even as Audi promotes an R4 concept car that looks an awful lot like an imminent replacement.

The 2011 Audi TT has a sporting stance, contemporary details, and cool good looks, but it's no longer the Deco piece of art it once was.

The tables have turned at Audi. Back in 1999, the clever little TT coupe and convertible were concocted in an Art Deco-inspired fashion--and it clicked. The high-concept design made a deep impression that gave Audi a nice fig leaf to cover the prosaic front-drive roots of the car underneath.

With the second-generation TT, Audi obviously decided authenticity comes from inside. The sheetmetal grew more muted and masculine, and as a result, more generic. The TT can safely claim it's something like the stunning R8 thanks to its side sculpting, low nose, and LED detailing. There's some interesting upswing to the "tornado" line rising down the sideview, and the roofline has that familiar (familial?) Porsche 911 cadence about it. Elsewhere the look doesn't go far in convincing us of its sportscar credo: Audi's overly emphatic grille drags the pavement and brings down the whole hoodline, and the headlamps and taillamps don't have the same drama that's cropping up in newer Audis.

The TT lost much of the character it possessed inside, too. The grabby circular theme isn't as spot-on this time; four big round vents are just perched atop a near clone of the more plasticky, button-riddled dash design seen in the A3 and A6. The flight-grade set of knobs, switches, and LCD screens may have some distinct masculine appeal, and it's more "sportscar" in that vein, but it's much less interesting to sit in and to study, than in the 1999 original.

The 2011 Audi TT accelerates briskly and handles with great grip; the TTS sharpens its speed scalpel even more finely.

Carried over from the prior model year, the 2011 Audi TT and TTS remain fine choices for any enthusiast looking for strong power, deft handling, and all-weather traction.

The engine, transmission, and drivetrain choices boil down to a horsepower quote. The TT coupe and convertible are fitted with a 211-horsepower, 2.0-liter turbo four-cylinder paired exclusively with Audi's fantastic six-speed dual-clutch transmission. The dual-clutch box lets twin interlocking transmissions handle blink-quick gearchanges without a clutch pedal whatsoever. It's only offered with all-wheel drive, which transmits the drivetrain's 258 pound-feet of torque to the wheels with a whizzy, delightful surge that doesn't end with a 5.3-second 0-60 mph time. The roadster adds 0.3 seconds to the tally, due to its extra weight.

In either body style, the TT sits more squat on its haunches than the original TT. It's a more nimble machine and a more seriously sporting car, low to the ground and grippy, with flat but eager determination. Is it a pure sports car? We're inclined to say yes, since the available magnetic suspension gives it a jittery feel that passes off in some circles as "sporty."

The four-cylinder engine also  gets good fuel economy, with EPA ratings of up to 23 mpg city, 31 highway.

If you're truly looking for the sportscar of the model line, you'll want the TTS coupe or roadster. With similar drivetrain pieces, the TTS gets its turbocharging massaged for an extra 54 horsepower, up to a total of 265 hp and 258 lb-ft of torque. The magnetic ride suspension is standard equipment here, and in its Sport setting, the ride height drops by 0.39 inches. The TTS also folds in larger vented disc brakes and a tuned exhaust system. It's just a touch quicker than the stock TT at 5.2 seconds in the 0-60 mph run, but top speed is lifted to 155 mph.

Two adults will find ample space inside the 2011 Audi TT; anyone else should consider calling in a side car.

The 2011 Audi TT lacks the extravagant space of a fuller-figured coupe. It's still comfortable enough for a pair of adults to cruise comfortably in, over long distances.

This generation of TT is longer and wider than the original, and it shows in the additional leg and shoulder room. Even up front, the head room is more on the negligible side, with any six-footer set to make contact with the headliner on a regular basis. The back seats found in the TT Coupe are teensy--in the Porsche vein, they're more upholstered luggage trays than anything else, since sliding the front seats forward to accommodate even small people means cramped knees for all.

Storage space is tight in the TT, too. The console and glove box are petite--but on the Coupe, the stow space beneath the hatch glass is actually generous for a car of its size. Since Audi's fabric roof design doesn't require the folding space of a hardtop convertible, the trunk space stays largely intact even when the lid is lowered. The cargo bin nearly doubles in size then the rear seats are folded forward, probably their best and highest use.

Audi's reputation for high-quality materials and fit and finish is evidenced in the TT's tight panel gaps and well-matched plastics. The convertible's roof wards off too much road noise, and it's well-insulated and well-trimmed inside and out.

The 2011 Audi TT scores well for safety despite the lack of formal crash-test data.

The 2011 Audi TT gets a relatively lofty safety score from our reviewers, though official crash-test results haven't yet been published.

The NHTSA (National Highway Traffic Safety Administration) has changed the criteria it uses to gauge the structural performance of cars in crash tests for the new model year. So has the IIHS (Insurance Institute for Highway Safety). Neither agency has issued crash tests in recent years, either.

However, the Audi TT has the brand's strong reputation for safety behind it, as well as a long list of standard safety features. All TT coupes and convertibles have standard hill-hold assist, anti-lock brakes, side airbags, and electronic stability control.

Available on all versions is a package that includes rear parking sensors, though a rearview backup camera is not available. Neither are blind-spot alert systems, lane-departure warning systems, or other electronic safety aids that are becoming more widespread in even mid-priced luxury cars.

Bluetooth is a welcome addition to the standard equipment list--our editors consider it a safety feature since talking and driving without a handsfree connection has become illegal in more than two dozen states.

Used Audi TT for sale near

The 2011 Audi TT isn't a sportscar bargain, but the coupe and convertible have a fair amount of luxury features as standard equipment.

It's well equipped in base trim, and the 2011 Audi TT can be optioned up to include some substantial creature comforts, even as the price tag climbs uncomfortably close to $50,000.

Bluetooth is now standard across the TT lineup.

A navigation system is optional on all models, as is a "baseball optic" leather trim package. There's an S-Line package that brings the more pedestrian TT a sharper look with details borrowed from the TTS. Heated seats also are options, as is magnetic ride control on the TT coupe and roadster.

The TTS model sports a Silk Nappa leather and Alcantara interior with aluminum trim. This year it gets new fog lights, 19-inch wheels, 10-way power front seats and an auto-dimming rearview mirror. Both versions of the TTS have a Sport button that tweaks the settings of the magnetic ride suspension.

On the TT roadster, the convertible top is manually operated unless you pay for power controls. When it's raised, the roof quiets the cabin well, though it cramps the TT's style a bit.

The four-cylinder turbo rush that comes with each 2011 Audi TT is accompanied by fairly high fuel economy ratings.

Since it's dropped its former V-6 engine option, the turbo four-only Audi TT fares better than almost any sporty car when it comes to fuel economy.

The numbers also hold true for the TTS model, which sports 54 horsepower more than the stock car's 211 hp.

Audi hasn't announced any plans for more fuel-efficient TT sportscars, but it has shown a new R4 coupe concept, complete with electric propulsion. However, it hasn't said whether the R4 will replace the TT or if it will be produced alongside a new TT in the future.

Be the first one to write a review on 2011 Audi TT
Rate and Review your car for The Car Connection! Tell us your own ratings for a vehicle you own. Rate your car on Performance, Safety, Features and more.
Write a Review
Browse Used Listings
in your area
8.0
Overall
Expert Rating
Rating breakdown on a scale of 1 to 10?
Compare the 2011 Audi TT against the competition
Compare All Cars
Looking for a different year of the Audi TT?
Read reviews & get prices
Related Used Listings
Browse used listings in your area