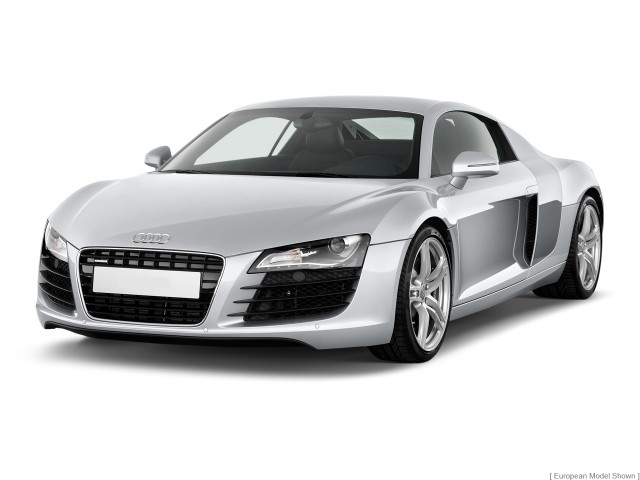 With a coupe, convertible, and a hardcore GT version, plus both V-8 and V-10 engines available, the R8 offers something for everyone--but you'll need to pick the right one for your personality and use case, so check them all out before settling on one.

A marriage of the best of German handling and Italian power, the 2012 Audi R8 is a fantastic all-around supercar.

Unique in Audi's range as a mid-engine supercar, the R8 has built its reputation from scratch in just a few short years. Despite not having the track record of Lamborghini or Ferrari in supercar construction, Audi has put the Italians and everyone else on notice.

For 2012, the R8 is available in three core guises: the Spyder (convertible), Coupe, and R8 GT. The Spyder and Coupe are two takes on the standard R8, while the GT sharpens both looks and performance to the next level. All three share the same basic low-slung, cabin-forward, athletic-haunched stance, however, as well as the same key styling elements, like the aggressive front end, the side "blades," and the brow-like LED daytime running lights.

The Coupe and Spyder are both available with a choice of either a 4.2-liter V-8 rated at 430 horsepower or a 5.2-liter V-10 good for 525 horsepower. Either will provide exhilarating performance, but the big V-10 is the way to go if you're hankering for real speed. Of course, the most focused of the group, the R8 GT, is an even better choice in that regard, generating 560 horsepower from a tuned version of the same V-10, with less weight, a more focused setup, and better overall handling.

Inside, the R8 is surprisingly roomy, with tall drivers finding no fault in space available. Materials are high-quality, the design is modern and appealing, and all of the Audi technology and convenience options you'd expect are available, including MMI navigation with real-time traffic, Bluetooth, and a high-end audio system.

As for safety, the 2012 Audi R8 hasn't been tested by the NHTSA or IIHS, but it offers a wide range of standard and optional safety equipment, including driver and passenger dual-stage airbags, side airbags, knee airbags, head and thorax airbags, stability control, parking system with rearview camera, hill hold assist, and a body shell designed to distribute and absorb crash energy.

Stunning from almost every angle, the 2012 Audi R8 has a bit of a stealth appearance.

Available in three basic body styles: coupe, spyder, and GT, the R8 ranges from dressy-classic to sporty-aggressive. The standard V-8-powered coupe is sleek, impressive, and understated in a German way, though it retains its mid-engine supercar silhouette and flair. Wide, sculpted fenders, large air intakes at the front and sides, the characteristic "side blades," and the low, sloped roofline come together in design harmony.

The topless Spyder models are likewise attractive, their soft tops not detracting from the look when up, and adding a definite dose of laid-back style when down.

Upgrade to a V-10 model and you'll get sportier details inside and out, and more aggressive wheels to denote the higher performance. The GT model is bonkers, with more aerodynamic winglets, showier paint combos, and a spoiler out back.

Inside, the R8 is at once no-nonsense and luxurious. The low cowl and easily-located controls blend seamlessly, with fine, understated materials giving a sporty, refined finish. As you climb the performance ladder, unique elements like shift knobs, gauges, and door handles get more performance-minded in their design, matching their exteriors.

Audi has long had a reputation for building excellent performance cars, but the R8 marked a departure into mid-engine supercar territory. Having been around for several years now, however, it's not so much out of the ordinary as it is the benchmark of the range--and, for some, the very idea of a supercar.

While it doesn't share the track record of Ferrari or Lamborghini, the R8 does borrow from its Italian Volkswagen Group cousin, if only under the skin. In terms of build quality and interior makeup, it's all German.

But what is the R8 like to drive? In a word, fantastic. All models are available with a choice of six-speed manual or six-speed R tronic automatic transmissions, both of which are slick, tight, and performance-focused. The automatic suits the R8's personality a bit better, however, making the most of the R8's daily-driver qualities while not holding it back on track.

In fact, just about the only thing likely to hold the R8 back on track is the driver. Quattro all-wheel drive makes grip under acceleration phenomenal, biasing up to 35 percent of the power to the front wheels, and the relatively low 3,400-pound curb weight (higher in some models) helps stick the car through the corners. Magnetically-controlled dampers help there, too, as much as they help smooth out rough roads on the street. Available carbon-ceramic brakes make fade a vague memory, but can be a bit too grabby on the street.

Steering is light, but not over-boosted, and gives a natural, connected feel of what the car is doing and what it's capable of doing.

The Audi R8's cabin is always a pleasant surprise: it's actually easy to get in and out.

From very quick to blindingly fast at the GT end of the spectrum, the R8 nevertheless manages to shed the race suit and don more casual gear with surprising ease.

Entry and exit aren't the easiest, considering its low roof and low ride height, but once inside, the R8 is very comfortable. The seats are supportive, well-bolstered, but not intrusive; leg room very good, even better than the Gallardo it shares a few parts with, thanks to its five-inch greater length. Compared to the likes of the Corvette or Jaguar XKR, it's the roomiest of the bunch, even for taller or wider people.

The flat-bottomed, tilt/telescope steering wheel, low front end, and large windshield allow the driver to get in position for very good forward visibility. Rearward visibility is compromised by thick pillars and a small window. The thick A-pillars impinge somewhat on front/side visibility as well.

Materials, design, and color schemes in the 2012 R8 are all outstanding. Cargo space, on the other hand, requires some planning, as even the small area under the front hood will hold only a couple of smallish soft-sided bags, while the netted cargo shelf behind the seats is best reserved for laptops, briefcases, and purses.

The 2012 Audi R8 gets no official seal of approval for its crash safety, but does offer a good standard set of safety equipment.

Being an expensive, relatively exclusive, luxury sports car, the 2012 Audi R8 hasn't been crash tested by either the NHTSA (National Highway Traffic Safety Administration) nor the IIHS (Insurance Institute for Highway Safety).

Some of those features include quattro all-wheel drive; dual front, side, and knee airbags (though not even coupes get side curtain airbags); anti-lock brakes; traction control, and stability control. The stability control has a performance mode setting that allows more fun while still reigning in unsafe impulses.

Optional extras that aren't strictly safety-related but which can aid in keeping an eye on things around the low-slung R8 include parking sensors and a rearview camera. They're standard on V-10 models, but are a definite desired feature for the V-8s, too, as they make backing up and positioning the car much easier. The optional LED headlights are also a nice extra, providing brighter, whiter light improving both visibility out of the R8 and toward it.

Used Audi R8 for sale near

Audi's MMI interface isn't the most straightforward, but the Bang & Olufsen audio system and other entertainment features make the learning worth the investment.

There's no need to mince words here: the R8 is richly outfitted in all forms, from V-8 to V-10, from Coupe to Spyder to GT.

The V-10s get most of the V-8's optional features as standard equipment, with the main upgrades being all-leather upholstery, different wheels, more carbon fiber trim, and carbon-ceramic brakes.

The R8 GT occupies a different space in the lineup, its higher-performance edge at the forefront, including standard carbon-ceramic brakes, but still offering navigation with MMI, full LED headlights and LED daytime running lights, a fixed carbon fiber wing, and 19-inch alloy wheels with high performance tires as standard equipment. A unique R8 GT Enhanced Leather package offers nappa leather with contrast stitching and more. Most of the optional upgrades to the V-10 model are also available for the GT.

The 2012 Audi R8 won't win any awards from the Sierra Club, but it trades that efficiency for serious performance.

As much as it offers in terms of style, luxury, quality, and performance, the Audi R8's one downfall is its gas mileage. It's not quite dismal, but it's not far from it.

Be the first one to write a review on 2012 Audi R8
Rate and Review your car for The Car Connection! Tell us your own ratings for a vehicle you own. Rate your car on Performance, Safety, Features and more.
Write a Review
USED PRICE RANGE
$99,500 - $159,860
Browse Used Listings
in your area
9.2
Overall
Expert Rating
Rating breakdown on a scale of 1 to 10?
Compare the 2012 Audi R8 against the competition
Compare All Cars
Looking for a different year of the Audi R8?
Read reviews & get prices
Related Used Listings
Browse used listings in your area
The Car Connection Daily Headlines