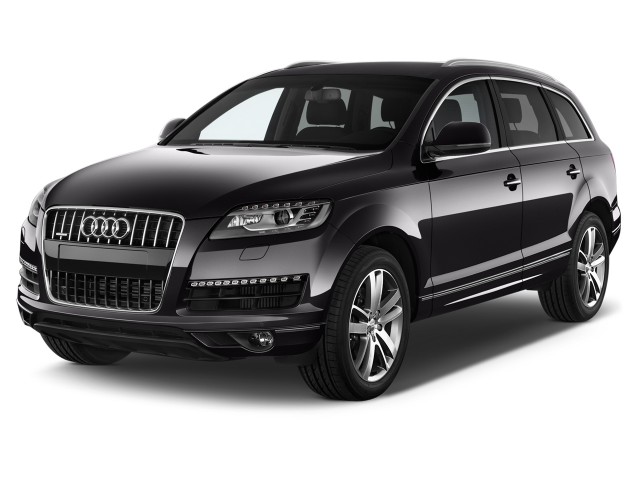 We think the TDI engine is worth the up-charge in the long run–both for fuel economy and its generally smoother ride quality.

Though the 2015 Audi Q7 might show a little of its age, there are so few faults here that it's hard not to love this big SUV.

Compared to similar big crossovers, the 2015 Audi Q7 is a smart compromise, as it trades off some off-road prowess in the name of on-the-road responsiveness and comfort. While it's not a serious off-roader, it's one of the most luxurious, family-friendly vehicles that can handle deep snow.

There's plenty to be desired here, from a spacious, premium cabin, to fairly strong towing ability.

The interior is warm and inviting, and it makes a great first impression with supportive front seats that are well-suited to longer-legged drivers. There's plenty of thigh support and just the right of lateral support to hold you in place on backroads and freeway ramps. In the second row, adults will also be happy, and a large panoramic sunroof helps brighten it, keeping the rear quarters from feeling at all claustrophobic. The third-row seat doesn't quite measure up. It's best for children, because space and access aren't very good. Cargo capacity is, and the Q7's rear seats fold down to create an 88-cubic-foot storage bin.

We admire Audi's ability to craft sleek, sophisticated sheetmetal shapes that blend crisp lines with smooth surfaces. The Q7 has great proportions and an excellent cockpit that's among the best in the luxury-SUV class. The controls can be a bit much to digest at first, but clean layout helps drivers figure them out.

Porsche's related Cayenne and the Touareg from VW are related vehicles, but they have more off-road ability than the Audi. With its longer wheelbase and its all-wheel-drive system, the Audi has better ride quality and great all-weather traction, but not enough ground clearance to trek far off pavement.

Audi formerly offered a V-8 engine in the Q7. It's gone now, and a V-6 engine in two power ratings takes its place. The 3.0-liter unit makes 280 or 333 hp depending on its state of tune. There's also a turbodiesel V-6 that almost matches the acceleration of the supercharged gas-powered Q7, while returning 28 mpg highway.

All-wheel drive is standard on the Q7. Outfit it properly, and it can tow up to 6,500 pounds, plenty for jet skis or light boats.

Crash-test data is lacking, but the Q7 has lots of safety technology on its options list: blind-spot monitors, LED lighting, and active lane control.

The 2015 Audi Q7 looks elegant and upscale on the outside, smart and nicely trimmed on the inside.

The 2015 Audi Q7 is both sleek and understated, considering its size. Some may not appreciate its oversized grille, but others will likely consider a dash of necessary personality on an otherwise subtle full-size crossover.

Subtle without looking stodgy, the Audi Q7 marries a sexy silhouette with quietly rendered details. It has some of the best proportions in its class. That grille? Yep, it's a big one, and it makes an emphatic style statement that we think is too strong, but we've gotten used to it. The shape is low and long, and the details all color the Q7 to give it a very modern look, even years since it was introduced. This year the Q7 has an option for new 19-inch wheels; 20s are available, even 21s if you prefer a hot look over a smooth ride.

Few automakers do as well as Audi at fusing rich materials with a state of the art look. The Q7's leather, wood, metal, and suede come off refined and warm. The clusters of buttons that control its audio and climate are fussy, but overall the cabin has a top-notch look, with fit and finish that casts a long shadow over its German rivals.

We think the turbodiesel works best with the character of the 2015 Q7; otherwise it drives lighter than most three-row vehicles.

The three engine choices include a 333-hp, 3.0-liter supercharged V-6, and a lower-output version of the same engine rated at 280 hp. A turbodiesel V-6 is offered, too.

We prefer the turbodiesel for its strong torque and its 28-mpg highway fuel economy rating. It can tow up to 6,500 pounds, and it's fun to drive.

No matter which Q7 you buy, Audi's SUV has an uncommon carlike feel. Traction is always under control with standard all-wheel drive; the ride quality is excellent, thanks to an air suspension that has choices between sport, comfort, and automatic tune. Steering actually has some feedback; it has a confident, well-weighted feel.

The Q7 wraps passengers in a lovely cocoon; otherwise the second and third rows are a great kids' zone.

There's little to complain about inside the 2015 Audi Q7, thanks to it spacious cabin for adults and kids alike, but it can become expensive as you add options.

Extremely comfortable, inviting, and warm, the Q7's interior is suitable for adults and kids. You just have to be careful where they sit.

Adults will find the front seats almost therapeutic. Firm and well-bostered, they have enough cushioning for drivers with long legs, plenty of upper-leg suport, and the bolsters they need to hold drivers in place for the freeway on-ramps and back roads of their choice. They'd be nearly as happy in the second row; the seats are flatter, but still supportive, and they're bathed in light from the panoramic sunroof.

The third-row seat is strictly for kids. It's tough to get in it, for starters, and leg and head room are barely enough for pre-teens.

Audi's made the second- and third-row seats a fold-away affair. With both rows lowered, the Q7 has 88 cubic feet of storage space, all accessible behind a power-lifting tailgate. The cargo floor sits rather high, so the Q7 doesn't quite have the interior space it looks like it might, but it's satisfyingly big for families.

The Audi Q7 has a great record for safety -- so don't let the lack of recent crash-test results discourage you.

Thanks to its stout construction and long list of standard and available safety features, the 2015 Audi Q7 earns excellent safety ratings.

The IIHS gives the Q7 good scores for most tests, but hasn't put it through the difficult small-overlap frontal impact test yet.

All Q7s can be fitted with more than the usual airbags, as rear-seat sidebags are an option. So are blind-spot monitors and lane-departure warnings. Outward vision is good, but the Q7's thick rear pillars don't go unnoticed.

Used Audi Q7 for sale near

With Google Earth maps and in-car wireless, the Q7 most of the features you want -- leaving any extra room for its standout trims and other cosmetic upgrades.

The 2015 Audi Q7 stands out in its niche, with a leading set of standard and available features.

From there, the Q7 can be fitted with plush things like Bang &amp; Olufsen audio, navigation, a knob-controlled infotainment system, and in-car wireless data with Google Earth mapping.

Audi's MMI interface can be tricky to use. It needs more redundant buttons for commonly used functions, and its command structure isn't always easy to navigate with its control puck.

The diesel stands out as the most efficient engine available in the 2015 Audi Q7, while the others are simply fine.

We have nothing against the base 3.0-liter supercharged V-6, making 280 horsepower, and the S line's more sharply-tuned 333-hp version. It's just that the 3.0-liter turbocharged diesel V-6, which was recently reengineered this year, is just about as much fun. Even if you go by the official 0-60 mph numbers (7.7 seconds to 60 mph), it's just as fast as the base engine, while being considerably skimpier on fuel during highway trips. And compared to either of the gasoline engines, it makes towing look effortless.

1 Review
5 star
100%
4 star
3 star
2 star
1 star
Rate and Review your car for The Car Connection! Tell us your own ratings for a vehicle you own. Rate your car on Performance, Safety, Features and more.
Write a Review
For 2015 Audi Q7

My wife'said car has everything in it but a butler.