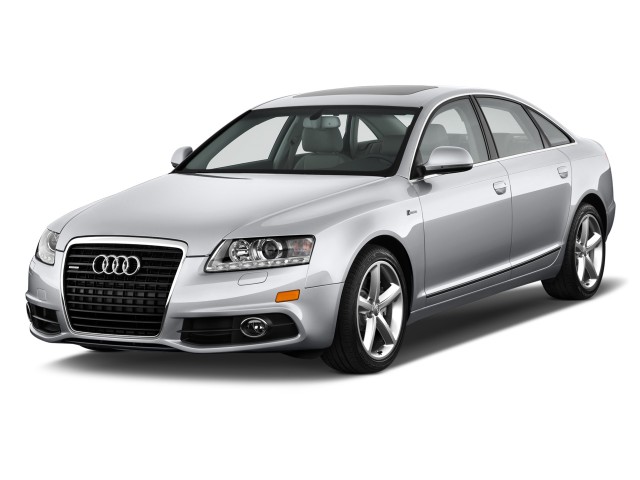 Sibling rivalry? Serious A6 shoppers should test-drive Audi’s smaller, less expensive A4 to see if the interior space and performance meet their needs. The cars are close in styling, performance, and comfort—maybe too close.

The 2011 Audi A6 is elegant and agile, although its cabin design is looking somewhat dated.

The 2011 Audi A6 returns for a final model year before its replacement shows up in U.S. dealers. With an attractive price and a stylish design, the A6 suffers mostly in its interior room when compared with cars like the BMW 5-Series, Mercedes E-Class, and Infiniti M sedans.

The A6 is sold as either a wagon or as a sedan. The shape reads svelte, save for the gaping grille, the A6's biggest styling misstep. Otherwise it wears a refined, well-detailed look. As sleek as the sedan may be, the Avant wagon easily is the more handsome vehicle. In its cabin, the A6 remixes its usual palette of simple controls, plain shapes, and lots of wood. More cluttered and less well-organized, with smaller strips of wood trim, the A6 is less satisfying to the eyes than before.

Audi fits one of three engines into each A6. Audi leaves shoppers few reasons to opt for anything but the supercharged six-cylinder that was new in 2009. It's as quick as the V-8, almost as economical as the non-supercharged V-6.

For the record, the base engine is unremarkable but refined 3.2-liter V-6. It puts out 265 horsepower via a CVT that has seven programmed "shift" points that lets it simulate an automatic transmission. Audi says it's good for a 6.9-second run to 60 mph and gas mileage of up to mpg highway.

The next step up in performance is a supercharged V-6 paired with all-wheel drive and a 6-speed, paddle-shifted automatic. In both the sedan and the wagon (the V-6 is the only drivetrain sold on the wagon), it's estimated at a 6-second run to 60 mph and at 26 mpg highway.

Handling across the board is a high point, with distinctly light-touch controls, deft steering and responsive brakes. The Sport package imparts harshness along with its all-season 18-inch or performance 19-inch tires.

The A6 doesn't have much more interior room than the smaller A4, and it's considerably more narrow than Infiniti's M, BMW's 5-Series, and the Mercedes E-Class.The front seats feel firm and rather flat. In back, the bench is carved out for two passengers. A third passenger won't be as comfortable, and there's less back-seat room overall than in competitive luxury sedans.

Along with the usual airbags and stability control, the A6 has tire-pressure monitors and active headrests. Blind-spot monitors are an option, as are a rearview camera, parking sensors, adaptive cruise control, and a lane-departure warning system.

The A6 comes standard with the usual power features, leather, and a high-power audio system. Navigation is also standard, and it's ruled by Audi's complex knob-driven MMI interface. It's an interface with a steep learning curve, but one that's more readily learned than systems from Ford and BMW.

For an in-depth review of this luxury line of sedans and wagons, see our most recent full review of the Audi A6.

2 Reviews
5 star
50%
4 star
50%
3 star
2 star
1 star
Rate and Review your car for The Car Connection! Tell us your own ratings for a vehicle you own. Rate your car on Performance, Safety, Features and more.
Write a Review
2011 Audi A6 4-Door Avant Wagon quattro 3.0T Prestige *Ltd Avail*

The Best Sports Wagon Hands Down

Excellent car and a beauty to drive