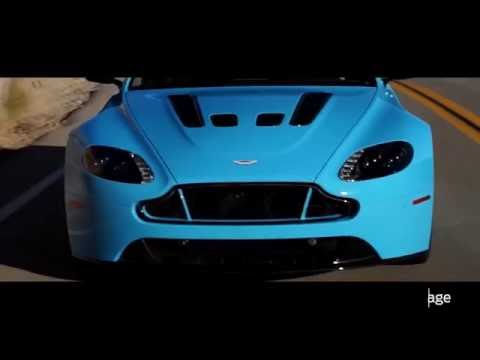 The Aston Martin V8 Vantage approaches affordability, offering exclusive looks with prices around those of the Porsche 911. However, we'd certainly prefer the V12 Vantage S and its unmatched exhaust sounds.

The 2016 Aston Martin Vantage makes great sounds with either the V-8 or V-12 engine, and the short wheelbase helps it deliver sports car performance in a gentlemanly package.

The 2016 Aston Martin Vantage is the automaker's sports car, even though it could often be confused with nearly any other car in its lineup—except for maybe the Rapide. It's Aston Martin's smallest car, and also the least expensive with V8 Vantage models priced from around $108,000. The priciest V12 Vantage S Convertible tops out at around $200,000, so it's not exactly a budget buy.

For that kind of money, owners get exclusivity and a choice between a balanced and thrilling V-8, or a throaty and mellifluous V-12 that's the eighth wonder of the world, according to us. Either version is quick and gorgeous, but if we had our pick, we wouldn't pass up the V-12's seductive soundtrack.

All Vantages look the part with the same seductive roofline, sloped windshield, and wide rear haunches that have been Aston Martin's calling card since they began building cars from aluminum. The V-12 version has more space for air to circulate, with more intakes cut into the hood, 10-spoke wheels, a blacked-out roof, and a blacked-out decklid. Aston Martin's calling card crystal keyfob is the interior talking point on all models, with the background of metal and Alcantara accents framing out the dash and cabin. V-12 cars get carbon fiber touches as well as special accent colors.

The V12 Vantage S is the most electric performer in the lineup. It features the company's biggest engine in its smallest car. It's 5.9-liter V-12 puts out 565 horsepower and 457 pound-feet of torque. The only transmission available is a single-clutch, 7-speed, automated manual. The V12 Vantage S runs up to 60 mph in 3.7 seconds all the way up to its top speed of 205 mph. It's as sonorous as it is beautiful; the V-12 sounds are intoxicating. As smooth as the engine is we can't say the same about its transmission, even though it's less juddery than we've see in other cars such as the Lamborghini Aventador and BMW M3. It's smoother with the right pedal matted: we've hit 143 mph without stressing the big V-12 at all.

With high horsepower and big engines underhood, gas mileage wouldn't be great in any car--and the Vantage range is borderline lousy. The V-8 versions of the Vantage (Vantage, Vantage GT, and Vantage S) are rated by the EPA at 13 mpg city, 19 highway, 15 combined with the manual, 14/21/16 mpg with the automated manual. The V12 Vantage S is rated at 12/18/14 mpg.

All Vantage models exhibit crisp steering and suspension responses, with perhaps a sportier bent than you'd expect in this luxury class. The V12 Vantage S features an adaptive suspension offering Normal, Sport, and Track modes that ramp from firm to firmer to firmest, though all allow agile moves. Adjusting the suspension also changes the throttle tip-in points, shift speed, and exhaust volume to announce to the world that you've arrived. (For more information about the V8 Vantage, read this first drive report of the V8 Vantage S at Motor Authority ).

Sticky Pirelli P Zero Corsa gumballs are standard, but for a more compliant ride shoppers may want to consider the no-cost Pirelli P Zero tire swap. The V12 Vantage S comes standard with carbon-ceramic pinchers that are not only incredibly confident, but also not as grabby as some others offered on competitors.

All Vantage models feature low-slung, roomy seats, with a simple center console, and excellent forward visibility. To that end, the Vantage succeeds as a driver's car—fewer distractions—but that doesn't necessarily make for a long-legged cruiser. The Vantage isn't particularly roomy, and probably at its best when taken for extended cruises, rather than long road trips.

As a bespoke, hand-built sports car, the Vantage is certainly romantic, although there may be variances in interior panels and fittings. The cabin is awash in leather, Alcantara, and metallic trim, with high-quality plastics filling in the gaps in places you might not normally touch. The optional carbon-fiber interior trim piqued our interest, which covers the center stack and door pulls in the lightweight material for well-heeled buyers.

The Vantage isn't particularly roomy, which is on par with most high-performance two-door coupes. There isn't much room in the trunk for cargo, and the cabin doesn't have many storage locations either. Considering the Vantage's mission for high-speed drives or sporty canyon runs, we don't anticipate that will be an issue for many shoppers, but it's worth pointing out.

All models in the Vantage range come with a standard complement of good features including a 160-watt Aston Martin audio system with a CD changer; Bluetooth, USB, iPod, and AUX-in connectivity; leather interior; automatic climate control; rear parking sensors, and power adjustable sport seats. The GT models come with less standard features to save weight, but stepping up to the V12 Vantage S offers standard navigation, memory seats, and various bits of carbon fiber and titanium accents inside and out.

On top of the standard equipment, Aston Martin will customize any Vantage to suit individual buyers with bespoke exterior shades and interior hides--if you're willing to cut a big enough check for them.

Low-volume, high-priced sports cars like the Vantage aren't normally tested by federal regulators or the IIHS. The Vantage is no exception, and we don't imagine they will ever be crash-tested in the States. Standard safety equipment includes the normal range of airbags, stability and traction control systems, and rear parking sensors.