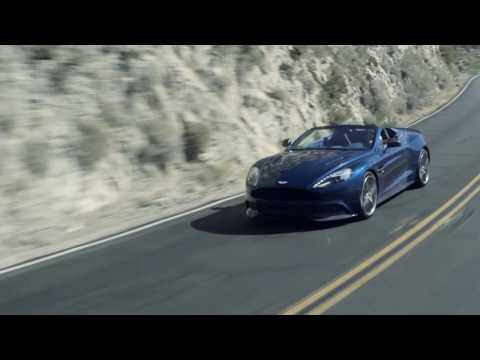 With prices around $300,000, the $18,000 gap between the coupe and Volante convertible doesn't mean much, so buyers should choose their body style based on what's more important: ultimate performance or top-down driving.

The Aston Martin Vanquish is a feast for the senses. Not only is it widely recognized as one of the world's most beautiful cars, its V-12 engine is also an aural fantasy, and every touchable surface is luxurious and carefully crafted. After a long list of changes for 2015 that included a new transmission, new engine software, and retuned suspension, the 2016 version is largely unchanged.

The Vanquish and DB9 GT look similar, largely because they share similar running gear, but the Vanquish is Aston's top grand tourer and is more luxurious. It uses carbon fiber for the body and parts of the structure, the transmission is an 8-speed automatic instead of a 6-speed, and the Vanquish comes with more equipment and higher-line materials.

The Vanquish uses a carbon fiber body, which means that designers can stamp more dramatic creases along the exterior. Aston designers showcase their flexibility in the construction by the sharp character line that extends from side gills along the doors and reaches into the trunk.

Starting at $288,950 for the coupe or $306,950 for the Volante roadster (both prices excluding $2,825 delivery fee), the 2016 Aston Martin Vanquish is easily one of the world's most expensive GTs. The automaker packs in relative value for that price—we said relative—with attention that only comes from hand-built craftsmen, exquisite materials, and a devistating shape.

Step inside the Vanquish and you'll be treated to a richly appointed interior with quilted or stitched leather—all done by hand, of course—solid metal trim, and carbon fiber accents. While the interiors of some Astons is starting to look dated, the Vanquish is an exception, mostly because it's exceptional. It looks like a million bucks, even though it's only $300,000.

The cabin is comfortable, although not all that adjustable due to the relatively small confines. Even the tallest riders won't complain about head room--especially in the droptop Volante—but leg room and hip room are relatively set. The vestigial rear seats can be snubbed in favor of a more useful shelf, which makes the most of precious cargo space in the super car. The cargo shelf also features a net, which can keep items in place during spirited drive. The Volante's roof folds and collapses into the trunk in about 15 seconds, and at speeds up to 30 mph.

The 5.9-liter V-12 engine cranks out 568 horsepower and 465 pound-feet of torque to rocket the coupe to 60 mph in just 3.6 seconds; the Volante hits the mark in 3.8 seconds. Max speeds top out at 201 mph for the coupe and 197 mph for the Volante. Gas mileage, predictably, is not great, with ratings of 13 mpg city and 19 mpg highway. Last year Aston Martin added a ZF-sourced Touchtronic III 8-speed automatic transmission, which really makes the most of the V-12's power. It feels very lively during sporty driving, smooth around town, and always pleasant and engaging to operate, whether you're driving in automatic mode or using the paddle shifters.

The paddle shifters have their own benefits. Holding the downshift paddle sets the car to click down into the lowest possible gear during braking, which is useful on a track, and the gearbox adapts to driving styles through its Adaptive Drive Recognition program. However, the transmission programming is never high-strung like it is in rivals with dual-clutch transmissions and Sport Plus modes. To get the most out of the power, the steering wheel shift paddles are a necessity.

The car's size and mass are unforgettable behind the wheel, but so is the enjoyment of driving a Vanquish--it's impossible not to smile while driving. The unbelievable sounds and thrust permeates every facet of the drive, and its grip on the road is unshakable. The steering isn't as tight as some of Aston's other sports cars, but the lighter feel is preferable on long highway jaunts. According to Aston Martin, the Vanquish weighs about 3,900 pounds despite its carbon fiber body. The weight is noticeable, but easily overcome with the V-12 engine and carbon ceramic brakes.

Adjustable dampers help iron out a ride that is generally quite firm. Sport and Track settings firm things up even more, but may be too harsh for everyday driving.

Like you'd expect for $300,000, the Vanquish is opulently equipped with all the luxury fittings: a 1,000-watt Bang & Olufsen audio system with Bluetooth and USB connectivity, navigation, leather, and wi-fi are all standard. Aston buyers can customize their car through the automaker's bespoke Q program, and carbon fiber packages can add heavier doses of the material inside and out.

Neither federal testers nor the IIHS have thrown a Vanquish into a wall, and we hope they don't start anytime soon. The high price and low volume of the Vanquish usually mean that it's skips those tests, but in the absence of official data there's still good news. The Vanquish comes equipped with standard airbags, stability and traction control systems, and superlative handling to help keep the car out of trouble.