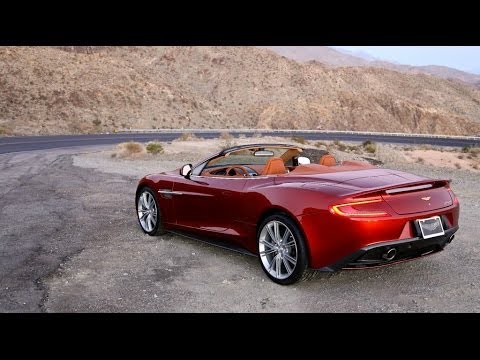 If you're going to buy a Vanquish, don't succumb to the impulse to just buy the first one you see--take your time, develop a custom specification, and have it built just for you. It's worth it, and so are you.

For those with the dosh, the 2014 Aston Martin Vanquish is a worthy and gorgeous addition to the supercar stable.

Aston Martin's top grand touring sports car, the Vanquish is utterly elegant and capable. In fact, it's one of the very best GTs in the world. As you'd expect, it also looks fantastic, wearing its modern take on tailored British style with grace. Starting at about $280,000, the Vanquish is for the very well-heeled, and it can be customized well into evil billionaire territory.

For the new model year, a convertible Volante version joins the ranks (on sale in early 2014), sharing its styling and performance with the fixed-roof model.

As with most of the company's cars, the Aston Martin Vanquish doesn't stray far from the corporate look, but it still presents its own unique look and feel. With a carbon fiber body wrapped around an aluminum chassis, the Vanquish does things with its exterior design that simply aren't possible with stamped metals. The sharply creased sides, for example, or the through-the-trunk-lid wing/spoiler, could only be made with composites. The overall result of the Vanquish's styling is a modern, muscular, yet graceful grand tourer that fits its niche-market role--whether in standard coupe or convertible Volante form.

Inside, the story is much the same, with hand-crafted leather, solid metal, and quality plastics wrap around elegant, modern shapes. The seats are comfortable, but not too aggressively bolstered, and while the rear seat is mostly for show, it can be replaced with a simple and useful parcel shelf. Volante models get a fabric soft top that deploys in about 14 seconds at speeds up to 30 mph.

Under the hood lies a 565-horsepower 6.0-liter V-12 engine. Paired to a six-speed automatic Touchtronic 2 transmission, the Vanquish is very quick, taking just 4.1 seconds to reach 60 mph. Top speed is 183 mph, but it's the getting there that's the most fun--and it sounds pretty incredible, too.

The 2014 Vanquish isn't light, however, weighing more than 3,900 pounds despite its carbon body. The result is a slightly ponderous feeling to its movements, exacerbated by somewhat detached steering feel, despite prodigious grip. The ride quality is a bit rougher than we expected, considering the obvious GT-class role of the Vanquish, but it's not objectionable, ultimately.

As with any Aston Martin, the exterior and interior are highly customizable, with the company willing to deliver any bespoke combination a buyer might want--for a price. Equipment-wise, the Aston offers the luxury basics: navigation, excellent audio in the form of a 1,000-watt Bang & Olufsen system, iPod and iPhone integration, Bluetooth phone and audio connectivity, and WiFi.

No safety data is likely to come from either the National Highway Traffic Safety Administration (NHTSA) or the Insurance Institute for Highway Safety due to the 2014 Aston Martin Vanquish's limited sales volume and prohibitive price. Nevertheless, with its state-of-the-art construction, very good on-road dynamics, and modern safety equipment list, we expect it to offer good protection in an accident, as well as the ability to avoid many on-road hazards.

If you're worried about how the Vanquish performs at the gas pump, you might be in the wrong place; nevertheless, you'll find its thirst for gasoline matches its hunger for speed: the 2014 Vanquish rates 13 mpg city, 19 mpg highway, and 15 mpg combined.