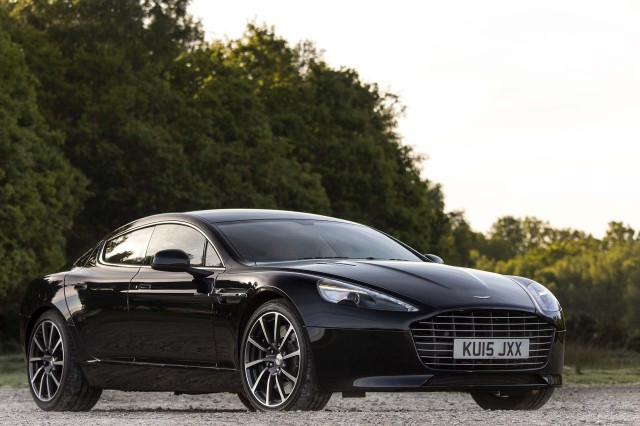 It's widely speculated that the Rapide S is in the sunset of its current life cycle, and will come back as an EV or as part of a Lagonda sub-brand. A good used Rapide S may be found on the market for a fraction of the cost if you're hungry for the V-12 version though.

The 2017 Aston Martin Rapide S is a stunning sedan and a relative rarity on U.S. roads compared to rivals from Porsche and Mercedes-Benz.

The 2017 Aston Martin Rapide S is a rolling serenade; a four-door orchestra of flowing lines, exquisite interior appointments, and with an accompanying ballad from its sonorous naturally aspirated V-12 that is rare, special, and likely the last of its kind.

The four-door grand tourer was introduced in 2010 and may be entering the final years of its current generation before it adopts a new chassis—and perhaps electrified powertrains—to better keep pace with offerings from Zuffenhausen and beyond.

We gave the 2017 Aston Martin Rapide S a 7.6 on our current scale thanks to its gorgeous interior and exterior, outstanding performance and quality. Its V-12 engine isn't the most fuel efficient and we withheld a safety rating for it without much official data. (Read more about how we rate cars.)

The 2017 Aston Martin Rapide S stays relatively unchanged for this year, and that's a good thing. The same curvaceous exterior is wrapped around its long, low four-door proportions. Its arched roofline is familiar to anyone shopping in the class: the Porsche Panamera, Audi A7, and Mercedes CLS-Class are all similar, "four-door coupes."

The Rapide S does a better imitation of a four-door coupe than others though, but it comes at a price. Unlike the Panamera, which eschews aesthetics for a massive rear seat, the Rapide S remains svelte and sleek, but at the expense of rear passenger space, especially upon entry through the narrow doors. With a taller driver or passenger up front, the rear seat is best reserved for children. In other words: think of the Rapide S as less of a sedan and more of a 2+2 with a second set of doors.

One aspect of the coupe-like design of the Rapide S that may require attention is rearward vision—you’ll want to rely on the rearview camera to negotiate rearward maneuvers. Outward vision is otherwise very good forward and to the sides.

Three-mode Bilstein adaptive dampers allow normal, Sport, and Track modes for a choice of handling and ride settings to suit the occupants. While the base damper setting is the most comfortable, it is too firm for buyers accustomed to the larger luxury cars from Audi, BMW, or Mercedes-Benz. The Sport and Track modes also adjust traction and stability control settings, as well as opening an exhaust bypass for a throatier sound from the big V-12.

It's most comfortable at a fraction of its maximum pace—which any sane person wouldn't attempt to approach—but it’s an enjoyable, engaging car to drive quickly, exactly as it should be.

Planted in the front rows of the Rapide S is a fine place to be. The interior is awash in leather and high-quality materials, befitting a car that starts north of $209,000.

The Rapide S cossets front-seat passengers with the same luxury found in its other grand tourers and its interior is a dead-ringer for the Vantage. The same pushbutton transmission selector and clear glass ignition switch are front and center; quilted leather and hand-stitched materials are behind the driver and passengers. The Rapdie S rear seat skimps on space for that sexy roofline, only 28.5 inches of rear-seat leg room are available to rear passengers, much less than the Porsche and Mercedes-Benz.

Its 7.8 cubic feet of cargo capacity isn't especially capacious given its four-door nature—perhaps it's enough for a weekend trip or light luggage detail en route to the airport.

Unlike the outgoing DB9, the switches and buttons in the Rapide are bespoke for the car, even if they're a little plain. The instrument cluster in the Rapide S still sports the same opposing tachometer and speedometer from the DB9, which is an arrangement we still like for its simplistic elegance.

New for 2017, Aston Martin made 20-inch wheels standard on the Rapide S and included its updated AMi II infotainment system with Apple CarPlay as standard too. The 6.5-inch screen ascends from the dash—unlike the integrated display in the DB11—and is controlled with a knob and pair of kidney-shaped button clusters placed in the center stack. It's a reminder that the Rapide S was developed shortly before Aston Martin's partnership with Mercedes-Benz and before that automaker's infotainment system was available for Aston Martin to use.

Despite the Rapide S’s premium positioning, it doesn’t boast the bevy of techno-gadget wizardry you’ll find at competing marques. The navigation and infotainment system is fine, but minimalist by luxury sedan standards; its 1,000-watt audio system is good, but again, short of the audiophile-grade equipment available elsewhere. On the other hand, the image of the Rapide S can be enhanced with a variety of customization routes, including both bespoke exterior colors, unique interior materials and hues, and packages like the Carbon Exterior Pack, piano black interior trim, and Duotone perforated red-and-black leather.

Like most supercars in its price range, the Rapide S hasn't been tested by either major safety rating organization and it's unlikely that it ever will. The Rapide S comes with the standard complement of dual-stage airbags up front, side airbags for driver and passenger, and stability and traction control systems.