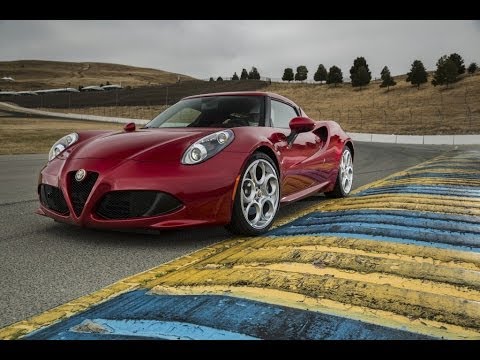 While all the other Alfisti (about a thousand of you) clamor for the Launch Edition, the standard car's the less expensive path to track glory. You'll spend the rest in tires, don't worry.

The 2015 Alfa Romeo 4C is a dazzling sports-car reincarnation of a heady past, and a future classic in its own right.

The Alfa Romeo 4C is a  sports car with a carbon-fiber body, a mid-engine layout, two seats, a turbocharged four-cylinder and a dual-clutch gearbox. The 4C is one of the more surprising new cars of 2015 and as close to an exotic as you can get for about $55,000 base—which is why our colleagues at Motor Authority named it their Best Car To Buy 2015.

Making perfect Italian sense, it's the car that's supposed to cue up buyers for a totally revamped Alfa lineup to come to the U.S. over the next few years.

Some of its primary competition includes the Porsche Cayman, the Mercedes-Benz CLA45 AMG, even the Chevy Corvette and Jaguar F-Type.

The 4C began life as a concept car at the Geneva Motor Show in 2011, and it's translated almost perfectly to reality. It's low-slung and outrageously sexy. Alfa says it's inspired by its Sixties racing efforts and the 33 Stradale, but it bears more than a passing resemblance to Ferrari's Dino, too. It's composed entirely of scoops, curves, cat-eyed side glass, round LED taillamps, and Alfa's trademark beaky overbite. Inside, there's a stark cabin dotted with red details, a flat-bottom steering wheel, and plastics textured to look like the road surface, intermingled with exposed carbon-fiber surfaces. The gauges are a 7-inch LCD display that changes color according to driving mode.

A new Alfa Romeo 4C Spider now gives buyers the choice of a targa-style roof or the coupe body style introduced April 2014. Launched as a 2015 model, the new 4C Spider comes standard with a soft top and offers an easily removable hard top as an option. Alfa Romeo's U.S. executives said they expect about half of 4C sales to be the new 4C Spider, half 4C coupe.

Aesthetically, the 4C coupe has a more appealing profile and features a transparent engine cover similar to designs used by Ferrari. However, the 4C Spider seemingly has no other downsides. The fabric top can be removed and stashed in the trunk; installing the hard top gives it coupe-like looks and offers better protection against thieves.

Power comes from a direct-injected and turbocharged 1.7-liter four-cylinder engine, rated at 237 horsepower and 258 pound-feet of torque. It's a raucous powerplant, better sounding outside than in, and there's just a touch of turbocharger lag. Each horsepower has only 10.3 pounds to accelerate, given the 4C's 2,495-pound curb weight, and acceleration is breathtaking, at 4.5 seconds to 60 mph. Top speed is set at 155 mph.

The rear-drive 4C comes only with a six-speed dual-clutch gearbox, and it works better than any manual might in the same circumstance. Alfa provides a “DNA” switch that changes shift and throttle pacing and gauge colors from dynamic (red), to natural (grey), to all-weather (blue).There's also the yellow-screen Race mode that turns off the stability control entirely; it's recommended for track days only.

We drove the new 4C Spider along the Northern California coast through Big Sur and around Mazda Raceway Laguna Seca where we were impressed with the handling of the mid-engine sports car. We were unable to detect any significant differences between the Spider and coupe from a driving standpoint.

Epic levels of grip and a compliant ride give the Alfa a great handling profile. The suspension features double wishbones in front and MacPherson struts in the back, much of it made out of aluminum. A Track package gets stiffer anti-roll bars and shocks. There's massive grip on hand, with the usual mid-engine caveat--don't lay on the brakes too much transitioning through corners. The 4C's manual steering is heavy, but lightens up at speed without feeling darty.

Brakes are vented, four-piston Brembo front, two-piston TRW rear. Braking from 60-0 mph takes less than 100 feet, according to Alfa Romeo. Stopping power is ferocious but the brake pedal feels hard, doesn't have much travel, and is difficult to modulate.

Interior space and storage are supercar-worthy, too--it's small. The body is wrapped around a tub made from carbon fiber, and it sits just 46.6 inches high. Getting in or out of it takes focus, and a medium build helps. The hard-bolstered seats can pinch too much rear end--it's Italian, after all--and the roof pillars are very close to the passengers. The right-seater also gets the added-on A/C pressing into their shin. Head room is, surprisingly, pretty good, but the 4C's cabin looks chintzier than it is, real carbon fiber mingling with low-rent mirror controls and an aftermarket radio ready for the Best Buy clearance table.

The 2015 4C Spiders we drove were pre-production cars but they seemed better than the 4C coupes we drove a year ago, particularly in terms of cabin refinement. We prefer the optional leather over the standard interior trim, though the latter reveals the carbon-fiber construction. Seats are available in leather or microfiber.

It's also exceptionally difficult to back into parking spaces, what with its trucklike turning circle of 40.5 feet and sliver of rearward visibility.

The 4C will initially be sold at select Fiat and Maserati dealerships. Pricing will begin at $55,195 for the standard car; it gets standard manual air conditioning, power windows and locks, USB connectivity, cruise control, black cloth seats (red leather is an option). Options include painted brake calipers in black or red or yellow; a racing exhaust; a track package with sport suspension and a choice of wheels. Paint colors include variations of white, grey, black, and of course, red.

Some 500 Launch Edition cars will be sold, priced from $69,695. They come with bi-xenon headlights, LED daytime running lights, carbon fiber on the rear spoiler and side mirror caps, an aluminum rear diffuser, a sports exhaust, staggered 18-inch wheels up front and 19-inch wheels in the rear, red brake calipers, leather trim on the steering wheel and door innards, and a serialized dashboard plaque.

1 Review
5 star
100%
4 star
3 star
2 star
1 star
Rate and Review your car for The Car Connection! Tell us your own ratings for a vehicle you own. Rate your car on Performance, Safety, Features and more.
Write a Review
2015 Alfa Romeo 4C 2-Door Coupe

At last the weenies are gone! Alfa Romeo is uncensored!

At last the weenies are gone! Alfa Romeo is uncensored! This is a go cart with lights. It rules
people found this helpful.
Was this review helpful to you? Yes
USED PRICE RANGE
$41,777 - $59,977
Browse Used Listings
in your area
7.8
Overall
Expert Rating
Rating breakdown on a scale of 1 to 10?
Compare the 2015 Alfa Romeo 4C against the competition
Compare All Cars
Looking for a different year of the Alfa Romeo 4C?
Read reviews & get prices
Related Used Listings
Browse used listings in your area
See More Used