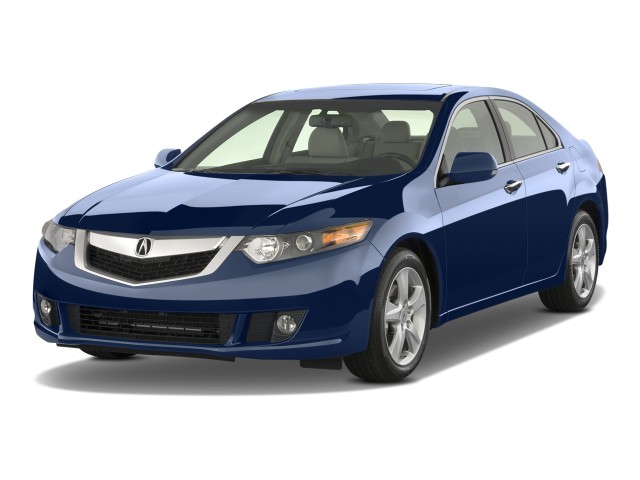 Hold on…for a while. You might be interested to know that a torquey and fuel-efficient 2.2-liter turbo-diesel four-cylinder engine is bound for the TSX as a 2010 model, possibly a late 2009. The engine will meet 50-state emissions standard, Honda says, and should have fuel economy in the 40-mpg range.

The new 2009 Acura TSX has a standout features list and distinctive interior, but its acceleration isn't notable.

The TSX is Acura's least-expensive sedan. It has front-wheel drive and sporty road manners. This year, it's completely redesigned and quite different than the 2008 TSX, with new proportions, a slightly larger size that's several inches bigger overall in most directions, a neatened appearance with the updated Acura grille, and a more inviting interior with additional standard and available convenience features.

A 2.4-liter 4-cylinder with 201 hp powers the new 2009 Acura TSX; like its predecessor, it's definitely peppier with the standard 6-speed manual, though torque in the midrange gets a boost, which boosts its responsiveness through the paddle-shifted 5-speed automatic. While it's eager, it's no high-performance vehicle; it has a firm but absorbent ride and nimble handling.

Most so-called entry-luxury cars skimp a bit on convenience and luxury features, and some fail to offer the top tech options. The TSX is especially feature-laden. Automatic climate control, a USB interface, and Bluetooth are on the standard-features list, and the available navigation system features real-time traffic information so it can help redirect you around traffic incidents. A 410-watt Elliot Scheiner-tuned sound system is also available.

The 2009 Acura TSX sports all the latest in safety, including side and side-curtain airbags, and electronic stability control. The 2009 TSX has earned the "Top Safety Pick" award from the IIHS.

The 2009 Acura TSX emerges from its redesign with a more distinctive exterior and its traditional interior virtues.

After five years on the market, the Acura TSX was due for an overhaul. For 2009, Acura offers that overhaul in the form of a complete redesign. Reviews are mixed on whether the styling on the new 2009 Acura TSX is a success.

The 2009 Acura TSX is a simple, entry-level luxury sedan, and accordingly, it offers only one trim level with one exterior style. Reviewers at Car and Driver feel "the 2009 TSX has far more road presence to catch people's eyes," though the "jury's still out on Acura's new guillotine grille." Cars.com writes that the new 2009 Acura TSX features "new headlights, a new grille that incorporates Acura's shield design, and an aggressively styled lower bumper." Reviewers at Autoblog characterize the "sharper, edgier styling" as "polarizing for sure," and note that it "looks better in light colors." Notable exterior styling complaints on this 2009 Acura come from Automobile, where reviewers feel that the "seventeen-inch wheels on [their] test car were pretty dull," and also Edmunds, which adds that the TSX's various styling elements "try too hard to mask an otherwise mundane sedan."

While the exterior of the Acura TSX may draw mixed reviews from the automotive experts, the interior tends to fare better.  Cars.com reviewers love the "all-new styling that includes a tiered dashboard, a new gauge cluster and controls, and an integrated control knob." One drawback to the interior design is that the "2009 Acura TSX is awash with dashboard buttons," according to Edmunds, and "although the layout is logical, the sheer quantity of little black buttons (upwards of 40) would make a 747 pilot feel at home." However, ConsumerGuide praises the interior for featuring gauges that are "large and quick to decipher," along with "clearly marked" controls.

A peppy, high-revving engine and confident handling are hallmarks of the 2009 Acura TSX, but steering feel is less sharp.

For years, Acura has marketed the TSX as a counterpoint to long-standing sport-sedan champs like the BMW 3-Series and Audi A4. Handling has always been a good selling point, though reviewers differ.

The 2009 Acura TSX is offered with only one engine, which Edmunds says is a "2.4-liter inline-4 capable of 201 hp and 170 lb-ft of torque." Comments on the engine range from "sufficient if not overabundant" power from Car and Driver to "surprisingly good low- and mid-range punch" from ConsumerGuide. However, reviewers at Autoblog aren't so kind, claiming that the Acura "TSX revs painfully slow," although it should be noted that their opinion is definitely in the minority.

The one performance decision that prospective Acura TSX buyers will have to make is how they would like power delivered to the road. This 2009 Acura offers "a six-speed manual and a five-speed automatic transmission with steering-wheel shift paddles," according to Edmunds, and the manual in particular is a joy. Car and Driver found the 6-speed "delightfully precise." The manual is so good, in fact, that Automobile terms it the "industry standard," thanks largely to its "absolutely precise" gear changes and "perfectly weighted" clutch pedal movement. In terms of the available five-speed automatic, Cars.com writes that it "delivers smooth shifts and doesn't make you wait long when you floor the gas pedal before it kicks down," and the paddles "produce fairly quick shifts."

With some fun-to-drive performance cars, fuel economy is sacrificed in favor of performance. Fortunately, the 2009 Acura TSX offers decent fuel numbers with its respectable engine figures. The EPA estimates that manual Acura TSXs will return 20/28 mpg, while the automatic boasts 21/30 mpg, numbers that Car and Driver finds to be "quite favorable."

Handling gets the most positive comments. ConsumerGuide finds that the Acura TSX "carves corners with grippy assurance and little body lean." Steering is a bit of a sore point, as Cars.com writes that one of their biggest issues with the new "TSX is its steering feel and feedback." ConsumerGuide calls the brakes "drama-free" and Car and Driver refers to them as "talented."

The 2009 Acura TSX excels in tight fits and good finishes, but there’s still more interior noise than with some luxury sedans.

With the 2009 Acura TSX redesign, the engineers and designers at Acura HQ have addressed a few of the issues that affected the outgoing model, but not all the problems have been solved.

The 2009 Acura TSX offers seating for five, and as is the norm, those up front will find themselves sitting in decidedly more comfort than those in the rear. ConsumerGuide reviewers find that "legroom is good" up front, "but headroom for taller occupants gets tight beneath the sunroof housing," and the "nicely bolstered" seats prove to be a "bit too firm for ideal comfort." However, they come in handy when throwing the Acura TSX around twisty roads. Reviewers at Cars.com feel that "it's easy to find a good driving position" in the seats of the Acura TSX, which are "covered in standard leather upholstery." ConsumerGuide call the rear room "somewhat disappointing given this vehicle's longer wheelbase versus its predecessor."

One category in which the increased dimensions of the 2009 Acura TSX are evident is cargo space. ConsumerGuide reviewers are pleased to find that, for 2009, Acura offers "storage pockets in all four doors" that help to "compensate for the somewhat small glovebox and center console bins." As for the trunk, Edmunds says that it "measures 12.6 cubic feet," which Cars.com says can be expanded "with both sections of the rear seat folded."

Reviews read by TheCarConnection.com show that materials quality and assembly are commendable on the Acura TSX, which features typically high-quality Japanese design and Acura touches. Edmunds says "those looking for a Lexus-like level of opulence will be disappointed." Fortunately for Acura, Lexus is closer to a competitor with the more upscale Acura TL rather than the 2009 Acura TSX. Other reviewers find favor with the interior quality, as ConsumerGuide mentions that the interior features "solid assembly quality with nicely textured and trim and plastics." Cars.com adds that "the previous TSX's material quality was already good for its class, and it's been improved with this redesign."

One of the biggest complaints about the outgoing Acura TSX model was the obtrusive tire and wind noise. For 2009, Acura engineers worked hard to make the interior quieter, but according to some reviewers, they may have gone overboard. Edmunds says "the 2009 TSX is equipped with additional sound-deadening materials and newfound structural rigidity, which quiets things down on the freeway." However, ConsumerGuide reports the TSX sounds "loud and unrefined."

The 2009 Acura TSX boasts the best possible crash-test ratings, but it would be nice to see that backup camera come standard.

Both NHTSA and IIHS crash tests show that the TSX is remarkably good at keeping its occupants protected during a collision. For 2009, Acura has earned the NHTSA's highest rating for the TSX, 5 stars, in both front and side impact tests. The IIHS also gives the Acura TSX its highest rating in similar tests. The IIHS was so impressed it awarded the 2009 Acura TSX a Top Safety Pick.

Aside from superlative crash-test ratings, the TSX also offers a typical assortment of gear. Edmunds lists the standard gear on this 2009 Acura as including "antilock brakes with brake assist, stability control, traction control, front seat side airbags and full-length side curtain airbags." Cars.com adds "a backup camera" that comes with the "optional navigation system." It might be worth opting for the nav feature; ConsumerGuide reports that while "visibility is good all around...the outside mirrors are on the small side."

Used Acura TSX for sale near

Acura spared no tech feature on the 2009 TSX.

As well equipped as the 2009 Acura TSX is with its standard features, the real standout is the one and only option: the Acura TSX Technology Package. Jalopnik raves about the included "killer Elliot Scheiner-tuned 10-speaker sound system." That navigation system in the Acura TSX is very capable, and Car and Driver reports that it offers "updated traffic problems and weather, even supplying the atmospheric conditions at your programmed destination."

Be the first one to write a review on 2009 Acura TSX
Rate and Review your car for The Car Connection! Tell us your own ratings for a vehicle you own. Rate your car on Performance, Safety, Features and more.
Write a Review
USED PRICE RANGE
$6,697 - $12,499
Browse Used Listings
in your area

8.8
Overall
Expert Rating
Rating breakdown on a scale of 1 to 10?
Compare the 2009 Acura TSX against the competition
Compare All Cars
Looking for a different year of the Acura TSX?
Read reviews & get prices
Related Used Listings
Browse used listings in your area
See More Used