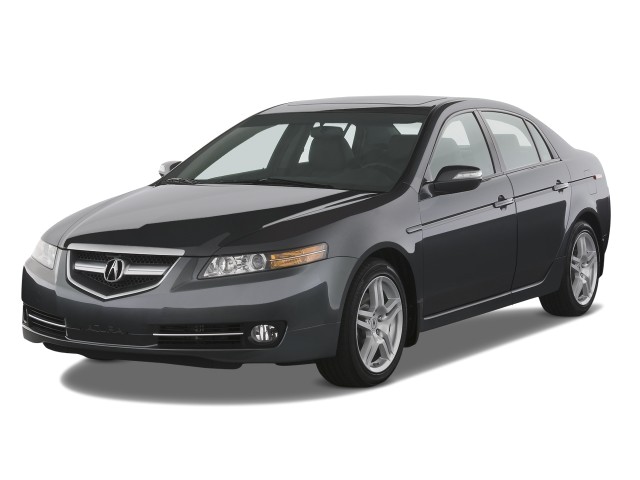 As the introduction of the 2009 Acura TL approaches, deals on 2008 models will improve dramatically. If a little less performance and a little better fuel economy are in order, Acura's TSX sedan is a fine performer.

The 2008 Acura TL is a "nice" car that's well equipped in every category except personality.

TheCarConnection.com's editors studied reviews from around the Web to bring you this conclusive report on the 2008 Acura TL. Experts from TheCarConnection.com have driven the Acura TL and TL Type-S on several different occasions. These experiences enable our team to offer you a definitive opinion on this sports sedan. This review also compares the 2008 Acura TL with other vehicles in its class to give you the best advice even when other reviews present conflicting opinions.

Totally reengineered way back in 2004, Acura's mid-size TL entry-level luxury/sport sedan received a number of updates and improvements for 2007. These improvements included revised exterior and interior styling, as well as an upgraded navigation system with AcuraLink satellite communication system and real-time traffic monitoring. With so much changing last year, alterations for 2008 were limited. For Acura, 2008 is the year that the company added tire pressure monitors as standard along with a new color, Bold Beige. Wow, eh? (This isn't a real surprise, as Acura will introduce an all-new Acura TL for the 2009 model year.)

The most sporting 2008 Acura TL is the Type-S high-performance edition. It's stuffed with a 286-horsepower, 3.5-liter V-6 engine (from the more expensive Acura RL sedan), and its chassis gets a sport suspension. The TL Type-S can be visually distinguished by its rear spoiler, 10-spoke alloy wheels, quad exhaust tips, and other upgrades.

The TL's standard 3.2-liter V-6 engine delivers 253 hp. While the Type-S can be ordered with either a six-speed manual or five-speed automatic transmission, the standard TL only comes with a five-speed Sequential SportShift automatic. This hurts the Acura, as many manufacturers (Ford and General Motors) are making six-speed automatics standard on lower-priced cars.

Like other Acura models, the TL comes with lots of standard equipment, including a DVD-Audio system and a relative handful of available options--such as a voice-activated navigation system and high-performance summer tires.

While the experts from TheCarConnection.com like the 2008 Acura TL just fine, it's hard for them to forget that this car is related to the Honda Accord. On the plus side, these roots form the basis for a smooth and refined automobile that is also practical and not too pricey. All these are good points. However, a certain passion is lacking from the Acura TL, and this sedan doesn't have the same level of personality that some other cars in the class have. Part of the problem is the front-wheel-drive powertrain that limits what Honda engineers can do with the car. They understand as well as anybody that you can't make a front-wheel-drive car handle like a rear-wheel-drive car.

The second main group are those with sportier personalities. These are the rear-drive sedans from BMW, Infiniti, and Lexus IS. All three brands offer 300-horsepower-plus six-cylinder engines and chassis that love to take on challenging canyon roads.

The last car to consider is a dark horse of sorts, the all-new Chevrolet Malibu. When decked out in its best duds and its top engine, the Malibu is a very nice car. Yes, it is a Chevy, but it offers nearly everything the Acura TL does at a lower price.

The 2008 Acura TL remains a handsome sedan, inside and out.

The 2008 Acura TL retains its place in the market as a classy and comfortable front-wheel-drive sports sedan.

With a redesign scheduled in 2009, the Acura TL garners reviews that tend to point out the age of the design. ConsumerGuide states, "Its basic design is also aging," while Car and Driver says it's still "attractive inside and out," and adds, “the TL has evolved into a refined sports sedan with wedgy good looks." The wedge metaphor’s a popular one; Edmunds says its “wedge-like shape is still attractive as ever.” Cars.com says, "The TL sedan exhibits a wide, aggressive stance." ForbesAutos notes its “handsome styling.” Motor Trend wonders if “an Italian design house had penned the sheetmetal,” admiring in particular its “crisp lines, short rear deck, and tightly drawn shoulders.”

The Type-S has some styling tweaks to differentiate it from the base version. They include “front ground effects and black chrome trim on the grille and bumper in place of the bright chrome elements,” Cars.com notes. “The trunklid has a small, tasteful spoiler,” they add.

“Acura upped its interior game with this TL,” Motor Trend writes, “adding finer materials and more stylish design than in previous versions.” Edmunds agrees, noting the 2008 Acura TL has a “spacious interior [that] remains a model of craftsmanship and ergonomics.” ForbesAutos likes the “tastefully styled and high-quality interior,” too.

The 2008 Acura TL has good handling and steering, but torque steer spoils the fun.

The 2008 Acura TL and TL Type-S supply plenty of power via the front wheels.
However, all that power results in noticeable torque steer, and reviews researched by TheCarConnection.com felt that the TL’s drivetrain ultimately cut into its performance.

While the Type-S can be ordered with either a six-speed manual or five-speed automatic transmission, the standard TL only comes with a five-speed Sequential SportShift automatic, though it “permits manual gear changes,” Cars.com reports.

Fuel economy is fairly strong for a vehicle of the Acura 2008 TL’s size. Edmunds notes that the base TL is rated at “18 mpg city and 26 mpg highway,” while the manual-equipped Type-S “actually returns better mileage at 18 city and 27 highway, while the five-speed automatic gets 17/26.”

When it comes to handling, the 2008 Acura TL suffers from the sheer amount of power going through the front wheels. ConsumerGuide states, "The base model is agile and well-controlled" and goes on to praise the steering, though reminding us the Acura 2008 TL Type-S has superior steering response and less corner lean. Kelley Blue Book, though, voices the opinion of the majority of reviewers when it suggests "the TL explores the limit of what is possible with front-wheel drive and a torquey V6." Motor Trend says, “"If Acura wants to sell a front-drive car with this much horsepower, the engineers should figure how to tune out the wheel wiggle." Edmunds reports, “Its steering is incalculably precise, and the car's cornering is tack-sharp,” but the Acura 2008 TL falls back in the pack when compared with rear-drive cars like the Infiniti G35.

Otherwise, Cars.com reports, “The TL has a pleasant ride. In the Type-S, a combination of firmer springs, shock absorbers and stabilizer bars keeps the car from heaving its weight left and right, and improves roadholding. “

The 2008 Acura TL has a high-quality cabin with good room for four adults, though some may not fit perfectly in the backseat.

The roomy interior and high quality of interior finishes and materials are hallmarks of the 2008 Acura TL.

The TL's spacious cabin, standard leather seating, and state-of-the-art electronics provide a comforting travel experience for both the driver and the front seat passenger. Kelley Blue Book describes it as "one of the roomiest most comfortable cabins in the category." Backseat passengers do not fare as well, with ConsumerGuide advising that the Acura 2008 TL has a "somewhat uncomfortable rear seat." ForbesAutos reports that the 2008 Acura TL “comfortably accommodates four passengers, with a fifth able to fit in the rear seat when necessary. Taller occupants may find headroom lacking.”

Most reviewers praised the Acura 2008 TL's cabin; Car and Driver says it is "loaded with standard luxury features, excellent quality and durability." Edmunds reiterates its approval of the Acura 2008 TL's qualities, stating it has a "roomy and well-crafted interior." Cars.com likes the "readability and layout of controls and gauges." The most resounding approval of interior appointments comes from Edmunds, which states, "Both TL models are beautifully crafted, and that's where this luxury sedan really shines, with near bulletproof build quality and top-notch materials."

The car experts at TheCarConnection.com found the comfort and quality of Acura's TL to be excellent. The interior of the TL is top-notch with leather seats, power front seats, sunroof, and surround-sound as standard features. Though less plush than some of its segment players, the materials used, quality of construction, and execution is first class.

The 2008 Acura TL provides a high level of standard safety features and good value for the consumer.

Acura continues its reputation for innovation and safety in the 2008 Acura TL and TL Type-S, with high crash test ratings and an optional backup camera.

Edmunds highlights the safety features of Acura TL for 2008, noting that the "2008 Acura TL comes standard with stability and traction control, front-seat side airbags and full-length curtain airbags." Car and Driver feels the "TL's inventory of standard safety features is comprehensive."

Standard on the Acura TL Type-S and optional on the base unit, the navigation system comes with a backup camera for improved rear visibility. Cars.com notes this addition but adds, "A rear camera is a fantastic addition to the system, but its usefulness is limited in bad weather conditions, as the lens becomes easily clouded by salt and road residue."

Used Acura TL for sale near

The 2008 Acura TL is a car for gadget lovers and audiophiles. The optional navigation system with backup camera is the only option available on the base model and should be considered if you do a significant amount of traveling to unfamiliar areas.

The 2008 Acura TL has an impressive list of standard features and some cutting-edge options, too.

The optional nav and standard entertainment systems in the Acura 2008 TL are top of the line. The navigation system recalculates routes in real time when you get off course, and the display is large and touch screen-enabled. It also uses data from the XM Satellite Radio service to alert drivers of traffic ahead, and uses the navigation system to reroute.

The CarConnection.com’s car experts enjoyed the sound system quality, the easily usable electronics, and the comfortable feel of the Acura 2008 TL. Standard features like Bluetooth, combined with the optional nav system, made for a pleasant and gadget-filled driving experience.

2 Reviews
5 star
50%
4 star
50%
3 star
2 star
1 star
Rate and Review your car for The Car Connection! Tell us your own ratings for a vehicle you own. Rate your car on Performance, Safety, Features and more.
Write a Review
2008 Acura TL 4-Door Sedan Manual Type-S

Best and most reliable car I have ever owned!!

A wonderful car that has been almost fawless since purchase.

8.2
Overall
Expert Rating
Rating breakdown on a scale of 1 to 10?
Compare the 2008 Acura TL against the competition
Compare All Cars
Looking for a different year of the Acura TL?
Read reviews & get prices
Related Used Listings
Browse used listings in your area
See More Used
The Car Connection Daily Headlines