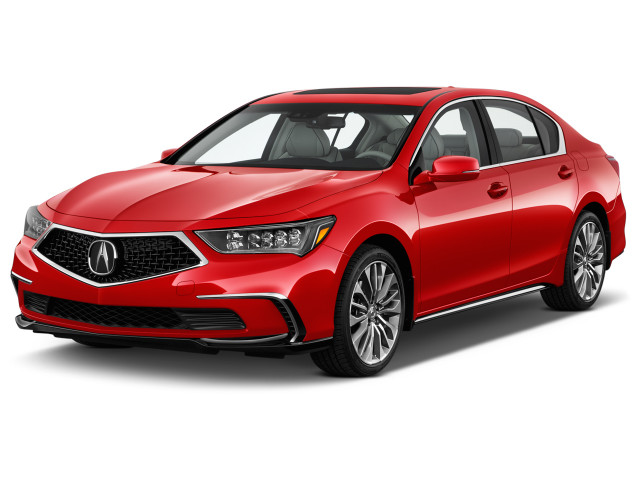 Go for the Sport Hybrid model for the best RLX experience in terms of options, fuel economy, and performance.

The 2019 Acura RLX wraps a forward-thinking powertrain in a comfortable but cookie-cutter package.

The 2019 Acura RLX is an outlier among luxury sedans, but that doesn’t mean it doesn’t deserve a second look. Boasting a potent hybrid powertrain derived from the NSX supercar, this aging sedan is a sporty green alternative to conventional German luxury options. We give it 6.7 overall, docking points for style but adding some back for great crash-test scores and its impressive powertrains. (Read more about how we rate cars.)

In the RLX, 2019 brought no changes following a refresh last year that added new styling including a massive diamond-shaped grille and some new LED headlights and taillights. Overall, these changes aren’t enough to offset the RLX’s pedestrian profile, and from any angle other than the front, it could be just another luxury sedan.

The RLX comes in two powertrain flavors, a conventional, front-wheel drive V-6-powered variant with 310 horsepower and the RLX Sport Hybrid, which pairs this engine with three electric motors and a 10-speed dual-clutch transmission for all-wheel drive and a potent 377 hp. Though the tech is borrowed from the NSX supercar, don’t expect the RLX to win any drag races, as this sedan is geared for comfort, not performance. A superb ride and smooth, controlled handling help offset the banal looks and aging interior.

Front seat passengers have the best seats in the house, with heated seats that provide plenty of support and lots of available storage. However, the rear seat isn’t as spacious as it should be on a sedan of this size, nor is the trunk compartment. Fuel economy is a standout, especially thanks to the hybrid powertrain.

Despite some touch-ups, the 2019 Acura RLX is a victim of its age in the looks department.

Mid-cycle refreshes halfway through a sedan's lifespan can only go so far to improve a car’s styling. Case-in-point: the 2019 Acura RLX. While it sports new design cues from the rest of the lineup, this sedan is dull overall, yielding a score of 5 out of 10. (Read more about how we rate cars.)

While the LED headlights and taillights and massive diamond-shaped grille add some drama, the RLX’s standard sedan shape doesn’t do enough to excite. Inside, it’s a similar story, with last-generation styling that looks ancient next to some of the more recently-redesigned rivals.

Material quality is solid, however, and there are a few interesting character lines both inside and out. Thanks to the lack of options on the RLX, though, each model gets handsome alloy wheels and the same style features, along with a few interior color choices.

The 2019 Acura RLX has a comfortable ride and boasts impressive hybrid tech but is no super sedan.

The 2019 Acura RLX Sport Hybrid is one of the best hybrids we’ve tested in terms of tech but is more intent on providing a comfortable ride than thrills on a twisty road. That said, we’ve given it 7 out of 10 for performance. (Read more about how we rate cars.)

The base RLX utilizes a 3.5-liter V-6 and relatively new 10-speed automatic transmission to pump out 310 hp through the front wheels, though the rear wheels are equipped with rear-wheel steering for a bit more confidence in the corners. It’s a solid engine with decent acceleration, but the real star of the RLX’s driving experience is in the ride, which is expertly dampened and plenty quiet.

The Sport Hybrid model packs some novel electrified tech, adding three electric motors and a 7-speed dual-clutch transmission to the standard V-6 for a combined output of 377 hp and 341 pound-feet of torque. This powertrain design is borrowed from the NSX supercar in concept but the execution here, while brisk, is much more subdued.

Thanks to electric motors at each of the rear wheels, however, the Sport Hybrid model offers all-wheel drive with excellent traction and more oomph off the line.

Steering is light but precise, and cornering is aided by the rear wheel steering, but this big sedan is no canyon-carver.

The 2019 Acura RLX’s three-box sedan design suggests ample interior space and a cavernous trunk, but somehow doesn’t live up. We’ve given it 7 out of 10 for quality. (Read more about how we rate cars.)

Front seat passengers will certainly be happiest, with soft, supportive seats that come heated as standard and ventilated on the hybrid model. Out back though, rear passengers have reduced headroom and legroom despite the RLX’s conventional roofline, and the trunk is barely big enough at 14.9 cubic feet for front-wheel drive models, dropping to 12 cubic feet for hybrids.

However, the supple ride and 12-way power adjustable seats up front almost make up for it, and while the cabin’s design is several years old at this point, fit, finish, and material quality are all up to snuff.

The 2019 Acura RLX gets some of the best safety scores in its class, with five stars overall and in every possible category from the federal government. With active safety tech standard too, we give it 9 out of 10 points. The only thing keeping it from a 10 is that it lacks some of the advanced self-driving tech available on most rivals. (Read more about how we rate cars.)

The RLX also gets a Top Safety Pick award from the IIHS for 2019, managing “Good” scores in every crash test, as well as “Superior” front crash prevention technology, though headlights and child seat anchors both get an “Acceptable.”

Speaking of safety tech, the RLX gets a rearview camera, adaptive cruise control, forward collision warnings with automatic emergency braking, and lane departure warning as standard. Traffic jam assist also helps accelerate and slow the vehicle from a stop up to 40 mph, and the Sport Hybrid model gets surround-view cameras and parking sensors front and back.

Used Acura RLX for sale near

The 2019 Acura RLX packs plenty of standard features, but no options, and the hybrid gets the better end of the deal.

For 2019, Acura has kept the RLX lineup simple, but blocks certain options from the base model to drive buyers towards the hybrid. We’ve given it 7 out of 10 for features. (Read more about how we rate cars.)

To get the full suite of features on an RLX, though, buyers have to step up to the Sport Hybrid, which adds surround-view cameras, heated rear seats, ventilated front seats, parking sensors front and rear, and an excellent 14-speaker Krell audio system.

The infotainment system, however, leaves a lot to be desired as its age is showing. The two-screen setup is a clumsy affair, with one used primarily for displaying information and visuals like maps and the other remaining mostly functional. Fortunately, many buttons and switches remain, but Apple CarPlay and Android Auto are conspicuously absent.

The 2019 Acura RLX is middle-of-the-pack in terms of fuel economy, but the hybrid model naturally manages much better figures. We give it a 5 out of 10 in this category. (Read more about how we rate cars.)

For 2019, the 10-speed automatic transmission in the front-wheel drive RLX still hasn’t helped improve fuel economy, with ratings of 20 mpg city, 29 highway, and 23 combined. The hybrid, on the other hand, improves city and combined mileage significantly, but the highway rating stays the same for 28/29/28 mpg.

Premium fuel is required for both models, however.

Be the first one to write a review on 2019 Acura RLX
Rate and Review your car for The Car Connection! Tell us your own ratings for a vehicle you own. Rate your car on Performance, Safety, Features and more.
Write a Review
Browse Used Listings
in your area
6.7
Overall
Expert Rating
Rating breakdown on a scale of 1 to 10?
Compare the 2019 Acura RLX against the competition
Compare All Cars
Looking for a different year of the Acura RLX?
Read reviews & get prices
Related Used Listings
Browse used listings in your area
See More Used