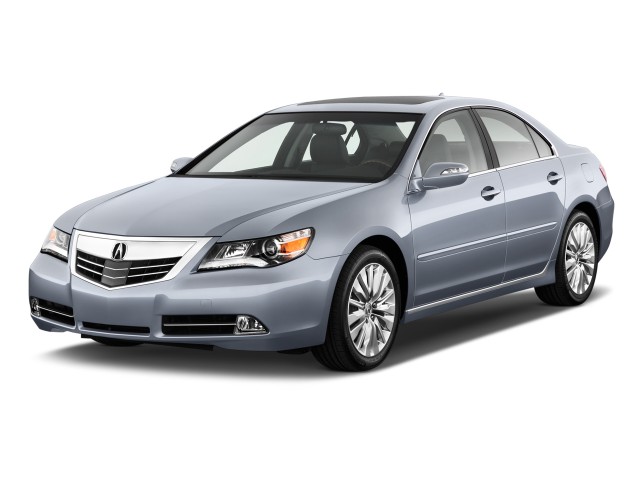 Think about leasing a model like the Acura RL; with its strong resale value and high price tag, it might prove favorable.

The 2012 Acura RL is loaded with tech features and supremely comfortable for long-haul trips; but it won't get driving enthusiasts all that excited.

The 2012 Acura RL offers up strong, surefooted all-wheel-drive performance, along with strong roster of comfort, tech, and infotainment features, all in an elegant, somewhat conservative package. But compared to nearly any other sport luxury sedans from rival brands, it comes up short.

Overall, we're not completely sure how Honda is distinguishing the RL from the more affordable TL, which also feels sportier and is, surprisingly, about the same size as the RL. Although no RL replacement has been announced, the current RL has been around since 2005, so it's definitely due. That said, while the RL's design is no longer fresh (despite a modest 2011 refresh), the RL still looks tasteful and sporty to most eyes. The proportions are nice, but the clean-sided, high-shouldered look gives it away as far from the cutting edge. Inside, the familiar Acura instrument panel has held up well; it's a little restrained, but still feels sporty and cockpit-like.

The Acura RL has promising performance credentials, but somehow from the driver's seat it doesn't quite provide the thrills you might expect. The powerful 300-hp V-6, a six-speed automatic with paddle-shifters, and a sophisticated SH-AWD all-wheel drive system help put the power to the pavement (and smartly manage it from side to side) even on tight, roughly surfaced corners. The powertrain is one of the more agreeable, responsive ones in this class, but it's let down by numb, innocuous steering and overall, a dynamically isolated feel that keeps you from pushing it hard—even though it's hard to fluster, with outstanding composure and grip thanks to Acura's SH-AWD system.

Cruising on the open road, the RL shows its best side. With its quiet, supremely isolated interior and a suspension that keeps body motion very much under wraps yet without giving up comfort, it's a go-fast touring machine for the sorts of trips where you want to cover hundreds of miles a day. All the while, the interior is so quiet that you'll never need to raise your voice to converse with passengers.

The 2012 Acura RL has one of the one of the quietest and very comfortable interiors of any luxury car—for those in the front seat. But it's far from the roomiest in back, and really only fit for four adults. The backseat is surprisingly short on headroom and foot space, and the trunk feels like a compromised afterthought. Again, the RL's strong suit is quietness in the cabin, thanks to a host of true luxury-car measures, including an active noise cancellation system.

The RL's safety is blemished only by a 'moderate' rating from the IIHS for roof strength, but the feature list is robust. Six airbags are standard, plus active front headrests, electronic stability control, and anti-lock brakes. Radar-based cruise control and automatic curve-following headlights are available, and a Collision Mitigation Braking System is bundled with adaptive cruise control (ACC), which adapts speed and distance to the vehicle in front.

Tech and comfort features are on offer in abundance on the 2012 RL, with some including xenon headlamps with Active Front Lighting, adaptive cruise control, heated and ventilated seats, Bluetooth and USB connectivity is standard. The navigation system taps into real-time traffic and weather data, though we found it somewhat laggy and rudimentary compared to some of the latest infotainment systems.

The 2012 Acura RL has a pleasing interior design, but the anonymous exterior is a turnoff to luxury shoppers who want to flaunt it—even a little bit.

The design of the current Acura RL has been around, mostly unchanged, since 2005, and on the outside it's showing its age. Contemporaries like the Mercedes-Benz E Class, Lexus GS 350, or Lincoln MKS all have fresher faces and more fashion-forward exterior details. In fact, the RL now feels flat-out dull for a luxury car. Acura terms the RL's styling 'aggressive,' but we're not seeing it here.

Last year a somewhat blunter (and cheaper-looking) snout included a grille that broke up the fluid look and integrated appearance of the original RL grille. That said, the RL still looks tasteful and sporty, with nice proportions, but the clean-sided, high-shouldered look keeps it far away from the cutting edge.

Inside, the familiar Acura instrument panel has held up well; it's a little restrained, but still feels sporty and cockpit-like. Stylistically it's pleasing and complex, with a middle belt that wraps across the dash and around into the doors, functionally it's one of the simpler designs among large luxury sedans, with center-stack controls nicely arranged with climate control up top, audio below that, and nav/trip controls beneath that. It stands out as unique (or perhaps a little obsolete) in that it doesn't rely on a touchscreen for climate or music controls. The cost, of course, it that there are a few more buttons, and a little more clutter.

The 2012 Acura RL offers well-rounded performance, but it's lacking the satisfaction and involvement that you probably expect in a sport sedan. .

Looking at the facts on the 2012 Acura RL spec sheet, you'd expect it to have promising performance credentials. There's a big, high-revving, 300-horsepower V-6, a new six-speed automatic with paddle-shifters, and a sophisticated SH-AWD all-wheel drive system to put the power to the pavement (and smartly manage it from side to side) even on tight, roughtly surfaced corners. But somehow, something's missing in the translation to the driver's seat. But somehow it doesn't manage to transmit those sensations through the driver's seat.

The RL's (271 pound-foot) engine isn't the torquiest off the line, but it builds to a sonorous and impressive power peak, for as quick of a super-legal two-laner semi pass as we could ever see laid-back drivers wanting. And one longtime problem with all V-6 Honda and Acura cars—lumpy, almost harsh shifts on gentle acceleration—seems to have been completely solved with the six-speed automatic, which with a multi-clutch torque converter adds smoothness while boosting fuel economy.

And there's something in the way the RL is tuned (and how well it's isolated, perhaps) that doesn't invite you to drive it hard, but it has no problem being driven fast. Thanks also to the isolation, you'll likely end up pushing way past the speed limit because. Body motion is kept well under wraps, but you don't give up any comfort, so it's a go-fast touring machine capable of eating up the miles. But, that said, the RL isn't on the same level as some sport sedans, because It's let down by numb, innocuous steering and overall, a dynamically isolated feel that keeps you from pushing it hard.

Review continues below
Otherwise, we'd wish for a steadier brake feel as well. While they're strong, they have an initial, almost overboosted bite that can take some getting used to.
8

A whisper-quiet interior and nice details show that the 2012 Acura RL is every bit a luxury car, but its design gives short shrift to backseat and trunk space.

Even among luxury-car interiors, the 2012 Acura RL has a cabin that ranks as one of the quietest and most comfortable—provided you're in the front seat. Considering its size, as a large sedan, it's surprising that it's barely good enough for four adults.


Firm, supportive front seats, with ventilated leather (and heating and cooling) strike a good comfort balance; all they're missing are extending thigh supports. In back, though, there's, surprisingly, just enough space for adults.

With the front seats in their rearmost position, six-footers will find headroom and legroom in back very tight—but not really any more ample than in a TL or Accord. The roofline has been awkwardly carved out to get that headroom, even. The trunk is also disappointing, as it's tiny for such a large sedan; loading isn't easy either, with the small decklid and opening.

The 2012 Acura RL offers a comprehensive safety-feature package—yet its roof-strength ratings are a cause for concern.

By most standards and measures, the 2012 Acura RL is a very safe car. Yet at least one area of its crash-test results could be a cause for concern for the most safety-minded shoppers.

The Insurance Institute for Highway Safety (IIHS) has tested and rated the RL in all of its categories, and while it gets top 'good' results in frontal, side, and rear tests, it didn't do well at all in the new roof-strength test. In fact, the RL has the worst results in the roof strength category of any model tested—indicating a higher-than-typical chance of injury in a rollover, which is, admittedly, less likely in a low sedan like the RL. A set of ratings from the federal government, in its recently revised tests, isn't available.

Used Acura RL for sale near

The 2012 Acura RL offers many of the latest infotainment and tech features, but the implementation doesn't feel as contemporary or elegant as you might want.

Tech and comfort features are on offer in abundance on the 2012 RL, with some including xenon headlamps with Active Front Lighting, adaptive cruise control, heated and ventilated seats, Bluetooth and USB connectivity is standard. The navigation system taps into real-time traffic and weather data, though we found it somewhat laggy and rudimentary compared to some of the latest infotainment systems.

Other features include a navigation system with real-time traffic and weather data, along with full XM satellite radio integration.

If you skip all that, standard equipment is pretty impressive, with a sunroof and xenon headlamps included, and leather upholstery, power sunshades, and dual-zone climate control further swaddle occupants in luxury. But many of the tech features are bundled together, driving up the price by thousands.

Also, technophiles will want to consider that many of the tech features are showing their age. They 'keyless' ignition is a disappointing stub attached to the steering column (not a fully integrated/hidden piece), and the overly sluggish, outdated navigation system feels a full decade behind Audi's 3D Google Earth displays in the A6 and other models. You'll also want to consider the merits of the RL's control layout, which opts for a central rotary knob—and many peripheral buttons—instead of touch screens. Some of the layout choices—like the A/C button clustered with the nav controls—are puzzling.

The 2012 Acura RL is respectable in its class but not particularly fuel-efficient.

With EPA fuel economy ratings of 17 mpg city, 24 highway, the 2012 Acura RL is neither particularly fuel-efficient nor especially thirsty.


However, there are a number of other non-luxury-brand mid-size sedans that provide about the same interior space but get much better gas mileage of around 30 or higher on the highway; examples include the Hyundai Sonata, Chevrolet Malibu, and Buick LaCrosse.

If anything, you might do even better than those EPA ratings, though. In a drive of a 2011 RL, over a 250-mile mix of suburban errands and a weekend trip mixing Interstate cruising and two-laners, we managed about 22 mpg overall—pretty respectable for a large-displacement V-6.

Be the first one to write a review on 2012 Acura RL
Rate and Review your car for The Car Connection! Tell us your own ratings for a vehicle you own. Rate your car on Performance, Safety, Features and more.
Write a Review
Browse Used Listings
in your area

7.4
Overall
Expert Rating
Rating breakdown on a scale of 1 to 10?
Compare the 2012 Acura RL against the competition
Compare All Cars
Looking for a different year of the Acura RL?
Read reviews & get prices
Related Used Listings
Browse used listings in your area
See More Used
The Car Connection Daily Headlines