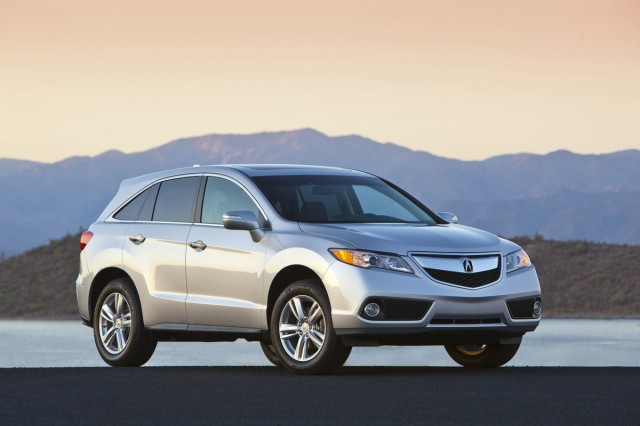 The 2014 Acura MDX is an all-new model expected later in the year. If you'd find a third-row seat, somewhat larger package, and a few more technology features of use, you might want to wait a few months and check it out.

The 2014 Acura RDX offers a relatively sporty look and driving feel, as well as a quiet, comfortable interior and top-notch safety; but features or flair it's no standout.

The 2014 Acura RDX has made quite an about-face from its initial form. Introduced as a compact crossover with a high-strung turbocharged four-cylinder with a taut ride, the RDX has matured into a better choice for family drivers. It's still sized manageably, but has been upgraded to a V-6 engine, and with a better selection of safety features and conveniences.

Already into its second year since a complete redesign, the RDX last year found--compared to the first-generation RDX that preceded it--a 'milder' personality that more shoppers should like. With the first-generation RDX, Acura had been pretty much the first one out the gate among sporty luxury-brand crossovers. It got a few things right--like the just-right size, nimble handling, and attractive design--but it offered plenty of rough spots, too, including a rough ride, laggy power delivery, and surprisingly lackluster gas mileage. The new RDX bucks the former model's turbo four and stuffs in a 6-cylinder in its place. Rivals are dropping bigger engines, but in this case, the switch yields better power, refinement, and fuel economy. Gas mileage is higher, up to 5 mpg compared to the previous engine--a respectable 28 highway in front-drive models.

The RDX has an energetic driving feel. It doesn't quite offer the turbo urge of the pre-2012 model, but it's strong, and smooth, whenever you need it to be--aided by a transmission that lags sometimes for downshifts but is otherwise responsive. Merges happen quickly into speedy freeway traffic and the RDX readily passes two-lane slow pokes. With new two-stage shocks, it rides better, and stays composed on winding roads while it handles their worse bumps.

Nicely drawn but hardly extroverted, we'd call this RDX more mature than the previous generation, as well as some other models in this class. Big fenders help punctuate an otherwise smooth shape and generally attractive profile. The cabin has sleek lines and a well-organized pod of dash controls. Soft-touch trim lends an upscale feel, though there are a few bright finishes on the dash we'd soften.

The RDX is closely related to the CR-V, and it shares a lot of the Honda crossover's smart packaging, from its low cargo floor, to its well-designed seats, to its versatile cargo area. Front-seat space is ample for even those bigger than 6 feet tall. Its tilt/telescope steering and 8-way power seat mean almost any driver can find the right position at the controls. The cabin is hushed, and comfortable from the back seat, too. The RDX sits in the middle of the compact-SUV market, with almost 77 cubic feet of storage inside, including beneath its rear cargo floor.

On the value front, the 2014 RDX undercuts BMW and Mercedes, offering more in the way of content than even Lexus does in the the RX 350. Yet you won't find touches like blind-spot monitors, adaptive cruise control, and automatic parking. It does have dual-zone climate control, keyless entry and pushbutton start, ambient lighting, cruise control, and 7-speaker audio with USB and Bluetooth audio control.

With the optional Technology Package, Acura fits a sophisticated nav system with voice commands, real-time traffic, SMS texting, and streaming audio via Pandora. It also gets the 10-speaker Acura/ELS audio system , a beautifully rich-sounding system. The navigation system is relatively easy to use, but we think it--and the interface itself--looks a bit dated in comparison to the large, wide-aspect screens in rival models.

The only significant change in the 2014 RDX, versus last year, is a new extra-cost exterior hue: Kona Coffee, replacing Amber Brownstone.

An understated design and clean lines make the 2014 Acura RDX one that looks good from all angles; but it won't be called bold.

Last year, Acura brought some new meaning to its crossover offerings with the second-generation RDX. With a fresh exterior, updated interior, and revamped purpose, the RDX is striking out in a more traditional direction. It shows with a design that's smooth and stylish but simply not at all edgy.

Acura has toned down the beak-like front end on the RDX, to good effect. Sleek proportions and smoothed-over curves give the RDX the look of a smaller vehicle in some ways, especially the arch of the glass along the roof line. The RDX isn't an SUV in the traditional sense, but it has some of the proportions of one, with a slightly raised ride height and powerful fenders. The low, sloped roofline gives it away as more of a wagon at heart.

And now that we've seen the upcoming, step-larger 2014 Acura MDX, the two designs fit very well side by side--with the RDX looking just a little leaner in profile and stance.

There's a more mature look inside, where the RDX trades some of its flashier bits from the previous generation for more mature matte finishes. The claustrophobic sensation of some sporty cars isn't found here, though the center console and controls do bend a bit toward the driver.

The smooth, strong V-6 in the RDX highlights excellent handling and a really well-tuned chassis.

The Acura RDX was once way ahead of the game in the trend for crossovers to go to turbochargers and downsized engines. Yet with this latest version--continued for 2014--it's moved to a 3.5-liter V-6.

The big V-6 in the 2014 RDX gives up some of the surge and urge of the previous turbo engine, but it's much smoother, quieter, and fitting of its luxury badge. We found the six-speed automatic transmission to be frustrating at times, with delays and indecision when multiple-gear downshifts are demanded, yet the engine's flexibility allows confident passing, and the rest of the time the automatic shifts smoothly and unobtrusively.

Compared to other luxurious crossovers its size, the RDX still bends toward the sporty side. The suspension has been softened considerably since the 2013 model year, and it's no longer a brittle-riding vehicle. It leans a bit more in corners, but more capable two-mode shocks mean that it can absorb more road imperfections. The steering has gone softer and more vague, but it's weighted well for drivers who will use it more on highways than back roads.

The RDX has strong brakes that don't modulate as well as they lay on lots of stopping force.

Finally, Acura has simplified the RDX's all-wheel drive. It doesn't vector torque to individual wheels anymore, but when the car senses it's going uphill, it can send more power to the rear wheels for better traction.

The 2014 Acura RDX has competitive cargo space and a quality interior—and it's surprisingly quiet and composed.

Whether it's space, comfort, or versatility, the RDX does a fair job at equaling tough competition like the BMW X3, Lexus RX, and Audi Q5.

Last year's redesign brought a roomier RDX, with improvements for front and rear passengers, as well as more cargo space. In front, the cabin is comfortable and relatively spacious, with enough adjustment to fit both taller and shorter passengers. The seat bottoms themselves should be longer, for more support. The back seat isn't wide enough for three passengers of the adult variety, but tall passengers won't have much to complain about.

The cabin isn't as tidy or lush as that in, say, Audi's Q5, but Acura does a fine job of sorting out the RDX's trim and fit and finish. A well-organized cabin has lots of storage spaces, and most of the controls are laid out in a logical way.

A solid set of standard equipment and some of the best ratings in this class for safety make the 2014 RDX a secure pick.

The 2014 Acura RDX already has some great crash-test ratings--as well as a top-notch set of safety equipment.

Front, side, and side-curtain airbags are standard on the RDX, along with anti-lock brakes, stability and traction control, daytime running lights, a backup camera, and a rollover sensor to trigger appropriate airbags. The RDX is missing some of the advanced active-safety features of the larger (and pricier) MDX, however.

The National Highway Traffic Safety Administration (NHTSA) has given the RDX a five-star Overall Rating, as well as top five-star scores in frontal and side impact. The Insurance Institute for Highway Safety (IIHS) has given the RDX top 'good' ratings in all frontal, side, and rear tests, along with roof strength; although it hasn't yet been tested in the new small overlap frontal category.

The 2013 RDX delivers lots of bang for the buck—although it's missing some of the high-tech gadgets.

Compared to most other luxury crossovers in the compact-to-mid-size category, the 2014 Acura RDX offers just a little bit more for the money in its standard form--for a lower base price than the BMW X3, Mercedes-Benz GLK-Class, or Lexus RX 350.

The only significant upgrade in the lineup is the Technology Package. That includes navigation with real-time traffic and weather, a 410-watt Acura/ELS surround sound system (which our editors highly recommend), voice recognition, remote power-operated liftgate, GPS-linked climate control, and Xenon HID headlights.

The 2014 Acura RDX is is mid-pack for a luxury crossover this size, but with its V-6 it does pack a lot of punch per gallon.

The 2014 Acura RDX only comes with one engine: a 3.5-liter V-6. That doesn't sound like the recipe for segment-leading fuel economy, and it isn't. But for its power and purpose, the RDX's fuel economy ratings aren't bad.

Beyond that, you don't have any other option for the RDX; as of yet, at least, there's no hybrid, and the diesel engine that Acura had been teasing a few years ago (which would have been perfect for this model) never arrived.

3 Reviews
5 star
33%
4 star
67%
3 star
2 star
1 star
Rate and Review your car for The Car Connection! Tell us your own ratings for a vehicle you own. Rate your car on Performance, Safety, Features and more.
Write a Review
For 2014 Acura RDX

Several problems with the 2014 RDX

Like the car, but the transmission performance is not acceptable and the suspension is noisy.

The RDX is just what I wanted. A smaller, classy SUV.