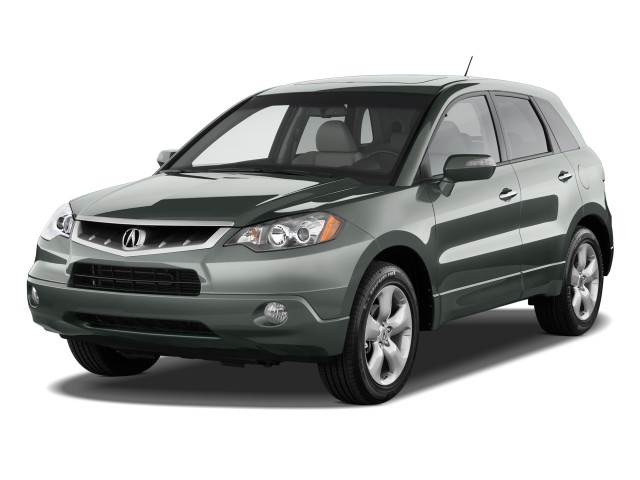 If you live in an area with a lot of traffic issues, opt for the XM real-time traffic system on the 2009 Acura RDX; it will quickly pay off in terms of saved time.

The 2009 Acura RDX has an energetic personality thanks to its turbo power and crisp handling, but those same attributes make it a bit nervous.

The 2009 Acura RDX is a compact, sporty crossover vehicle. Part SUV and part tall wagon, the RDX makes no claims of off-road ability, instead offering the cargo versatility of a ute and performance more like that of a sport sedan.

The RDX is similar in some ways to the CR-V, but it has a very different feel from the less expensive Honda. The exterior style of the 2009 Acura RDX is more aggressive and angular than a typical SUV with the designers focusing on the "sport" rather than the "utility" of "SUV." The interior is also very driver focused with a crisp design, metallic trim, and leather seats.

The 2009 Acura RDX comes with a single powertrain combination: a 2.3-liter turbo-4 that makes 240 hp. It's combined with a 5-speed automatic that can be shifted via paddles.

The engine in the RDX feels more sport coupe than sport-ute. It's energetic but comes across as a bit spastic. All-wheel drive is also standard and does a good job handling the frenetic turbo power. Turbo lag is evident, and when it does kick in, it comes on strong, making it difficult to modulate the power. One advantage of a turbo, at least in EPA estimates, is better fuel economy with ratings of 19 mpg city, 24 mpg highway. TheCarConnection.com notes that those ratings are quite optimistic, however, and most drivers will see figures in the upper teens.

Engine response aside, the 2009 Acura RDX drives with eagerness compared to other family-oriented small utes. The RDX has strong brakes that bite quickly and stop swiftly. Quick and light steering also helps to make the RDX one of the more carlike crossovers on the road.

The 2009 RDX rides on standard 18-inch wheels attached to a strut front and multi-link rear suspension. The package isn't as tight as a BMW X3 but is far from the plush ride an American-style SUV delivers. If you are considering the RDX, make sure you spend time on a myriad of road types, as ride quality is a bit hard for potholes. The front perches are comfortable, but the rear seats aren't designed for adults.

The RDX enters its second year with no major changes. The 2009 Acura RDX comes standard with the hardware for satellite radio, Bluetooth, power driver and passenger seats, and USB iPod input. Satellite radio-driven traffic data and DVD-Audio are optional.

The 2009 Acura RDX has earned 5-star ratings from the NHTSA for most crash tests, and 4 stars for its rollover risk.

The 2009 Acura RDX is athletic-looking, attractive, and unmistakably Acura.

The RDX wins kudos for its tightly composed look.

Cars.com approves of its 'manageable dimensions'. MyRide.com calls it 'not exactly sexy', 'more athletic than aggressive.' Kelley Blue Book points out that the RDX's 'unconventional tailgate' gives it a 'smoother look.'

Edmunds says the cockpit of the RDX is 'considerably more upscale' than some of its rivals. Cars.com finds the 'gauges are well-lit...and are easy to read.' Consumer Guide complains that the climate controls and audio switches are 'undersized.'

The 2009 Acura RDX performs just as athletically as it looks, although fuel economy is unimpressive.

The 240-hp turbo-4 Acura fits in the RDX is 'slightly weaker' than the one Mazda fits into its CX-7,' according to Car and Driver. Autoblog says it's fine with the '5-speed automatic transmission [with] manual shifting capability.'. Forbes approves of the RDX's torque, which can 'rival the power produced by some 6-cylinder engines.'

Cars.com says 'power doesn't come immediately.' Once it's put into Sport mode, the RDX has shifts that are 'above-average.'

The best feature of the RDX could be its AWD system, Autoblog says.' 'You'll never worry about taking a turn faster than you planned,' Cars.com agrees.

In terms of gas mileage, the RDX's '22 mpg on the highway' is called out by Forbes Autos, while Car and Driver says the RDX's gas mileage to be '3 mpg worse than the ballsier BMW [X3]'s.'

The 2009 Acura RDX is quite impressive inside—provided you’re sitting in front.

The RDX puts snappy performance ahead of comfort.

Auto Spectator is fine with front seats that provide a 'confident field of view.' MyRide.com likes the 'sturdy seats [that] hold occupants nicely,' and thinks the driver's seat is 'superb.'

Cars.com thinks the cargo area is 'right up there with the best.' Consumer Guide finds the 'large door pockets' useful. KBB says the RDX's center console is 'big enough to swallow a laptop computer.'

There's less to love in the back seat. KBB calls it 'cozy without being cramped.'

Forbes Autos considers the drive 'a bit noisy on the front-passenger side.' Consumer Guide thinks the 'tires are noisy even on smooth asphalt.'

TheCarConnection.com also notes that the RDX rides very firmly. If you drive on relatively smooth roads, you'll be fine, but pothole-ridden surfaces can prove uncomfortable.

The Acura 2009 RDX is perhaps the safest vehicle in its class.

Nearly all signs indicate that the 2009 RDX is reassuring in its occupant protection and accident avoidance.

Cars.com reports the RDX earns the IIHS' top rating of Good, a feat that earns a Top Safety Pick award.

Forbes Autos says safety is a part of its design. 'The hood is specially designed with collapsible hinges.'

Edmunds gives the nod to standard features such as 'front-seat side airbags' and 'side curtain airbags with a rollover sensor.'

Consumer Guide points out there are 'no factory options' on the RDX's order sheet. It's missing features becoming common on luxury cars, features like adaptive cruise control.

The 2009 Acura RDX comes with everything but the kitchen sink.

The 2009 Acura RDX has enough features to please most technology snobs--along with an extensive list of standard equipment that goes beyond what's offered by many competing models.

At Acura, 2009's RDX has just one option available--the Technology Package--but it's a doozy. According to Kelley Blue Book, it includes 'a navigation system with voice recognition and real-time traffic information, GPS-linked solar-sensing climate control and a 410-watt, ten-speaker audio system that features XM Satellite Radio and a six-disc CD/DVD-Audio player with MP3/WMA capability plus DTS and Dolby Pro Logic II processing.'

Be the first one to write a review on 2009 Acura RDX
Rate and Review your car for The Car Connection! Tell us your own ratings for a vehicle you own. Rate your car on Performance, Safety, Features and more.
Write a Review
Browse Used Listings
in your area
8.6
Overall
Expert Rating
Rating breakdown on a scale of 1 to 10?
Compare the 2009 Acura RDX against the competition
Compare All Cars
Looking for a different year of the Acura RDX?
Read reviews & get prices
Related Used Listings
Browse used listings in your area
See More Used
The Car Connection Daily Headlines