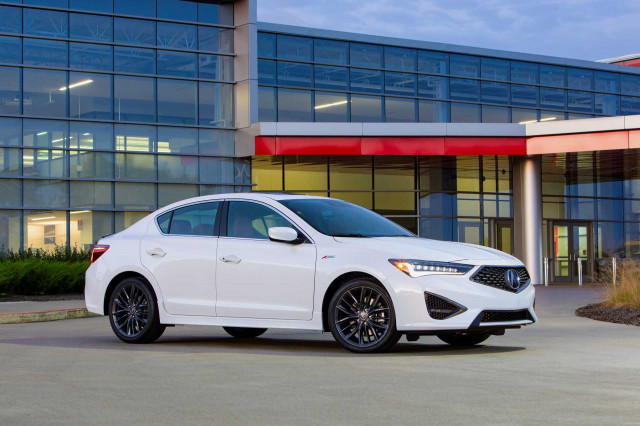 The $1,850 Premium Package is the key to unlocking the luxury in Acura’s small sedan.

The 2020 Acura ILX is still the most affordable car with a luxury badge, but it requires a few concessions.

The 2020 Acura ILX compact sedan is not a full-blown luxury car, but it brings enough niceties to the table that it makes a compelling case as an entry-level premium product worthy of consideration.

For 2020, the ILX continues on more or less unchanged, less some minor feature adjustments. Under the skin, it’s still based on the last-generation Honda Civic, which costs it a bit in terms of refinement and comfort. For that (and a few other reasons), we rate the 2020 ILX a 4.7 out of 10. (Read more about how we rate cars.)

The 2020 ILX starts at just a hair under $27,000. It is offered with three packages that can bump up the cost of entry to less than $33,000, which is appropriate for a premium (but not quite luxury) sedan.

On the outside, the ILX splits the difference between a luxury and a well-appointed mainstream model. It’s powered by a 201-horsepower inline-4 paired with a dual-clutch, 8-speed automatic transmission. As is typical of Acura sedans, the ILX drives its front wheels only. All-wheel drive is not available. Despite the available A-Spec package, the ILX isn’t much of an athlete, but it does handle respectably.

Acura’s 2.4-liter inline-4 requires premium fuel and delivers a combined fuel economy of 28 mpg, which is unremarkable, but passable.

The ILX’s standard moonroof can make the interior a tight fit for 6-footers, but it’s otherwise comfortable. Android Auto and Apple CarPlay are available options, which competitors make standard equipment. But adaptive cruise control, automatic emergency braking and active lane control are all standard, which gives the ILX a safety boost.

The ILX sedan is due for a redesign.

For better or worse, the ILX looks like an Acura, but after several hasty updates, there really isn’t a lot more Honda’s premium brand can do to improve the compact’s styling. The fundamental design dates back to 2013, and it shows.

The ILX’s sports Acura’s new (and large) corporate grille, which doesn’t do the small sedan many stylistic favors. It does boast standard LED headlights for a little upmarket flair, but even that doesn’t really set the ILX apart, even among mainstream offerings, and they did not receive good marks from the IIHS.

Taken in whole, the ILX’s design still comes off a bit haphazard and disjointed.

The ILX’s interior isn’t much to write home about either. The dash is cluttered and its materials are unimpressive. Loaded-up models look a bit neater thanks to a 8.0-inch touchscreen infotainment system, but it doesn’t do much to elevate the rest of the cabin.

For those who want a sportier look, the available A-Spec package gives the ILX an edgier look.

The 2020 ILX fills a slot in Acura’s lineup that was once dedicated to sporty compacts such as the Integra and RSX. Unfortunately, the ILX doesn’t really live up to that legacy.

We rate it at 5 out of 10. The ILX’s transmission is a high point, but there’s not much else compelling about its performance.

With 201 horsepower on tap, the ILX offers a bit more oomph than a lot of other small cars. Its naturally aspirated 4-cylinder packs 180 pound-feet of torque, which doesn’t jump off the page, but it’s enough to get the job done. Thanks to the 8-speed dual-clutch transmission, the ILX offers respectable acceleration and quick, smooth shifts. Wheel-mounted paddles can make the experience more engaging.

Unfortunately, even the 8-speed fails to elevate what are otherwise the underpinnings of the last-generation Honda Civic Si. The heavier ILX lacks the replacement Civic’s fleet-footedness and torque turbocharged engine, making the premium Acura feel dated by comparison. Its comfort-tuned suspension is great for getting around, but not as adept when it comes time to hustle. The A-Spec’s larger wheels don’t help much in this regard, especially in terms of comfort.

The ILX’s standard power moonroof, which is a nice feature, but it compromises head room, especially in the rear. These cramped quarters cost the ILX, and we rate it a 3 out of 10 for comfort.

The front seats are wrapped in synthetic leather, giving the cabin a premium appearance. The standard eight-way power-adjustable driver’s seat is a nice touch, and the Premium package adds real leather and a power-adjustable passenger seat. The ILX’s 38 inches of head room are adequate, but not outstanding.

In the rear, there’s sufficient leg room, especially considering the ILX’s compact dimensions, but nothing earth-shattering. It offers just under 36 inches of head room, which will be cramped for taller passengers.

The ILX’s cabin is reasonably nice, but falls short of being truly luxurious.

Federal and independent testers give the 2020 ILX good marks.

The 2020 Acura ILX comes with automatic emergency braking, active lane control, and adaptive cruise control. It performs fairly well in both government and IIHS safety tests, but falls short in headlight performance. This combo is still good enough for a rating of 7 out of 10.

NHTSA was kind to the ILX, granting it a five-star overall rating, but it scored only four stars in front crash and rollover tests.

The ILX performed similarly in IIHS testing, but was kept out of Top Safety Pick contention by its poorly rated headlights. Its automatic emergency braking system was rated “Superior.”

New Acura ILX for sale near

Base versions are lacking, but top trims of the ILX are competitive.

What the ILX lacks in luxury it makes up for in value.

We rate the 2020 ILX at 4 out of 10 for features, largely because its base trim is lacking.

The base ILX costs just under $27,000. For an upmarket brand like Acura, that’s affordable, which makes its somewhat unimpressive feature suite a bit more forgivable. The lack of basic inclusions such as smartphone integration is glaring.

Apart from LED headlights, USB port, Bluetooth connectivity, power moonroof, power driver’s seat, heated front seats, and synthetic leather upholstery, the base ILX doesn’t offer a whole lot. Fortunately, the Premium package adds only $1,850 to the ILX’s base price, and frankly we’d be surprised to see any on dealer lots without it. It adds Apple CarPlay and Android Auto compatibility, which helps.

For those who want navigation, the Technology package is your answer. It’s pricey, at $3,750 over the base ILX, but it also bakes in an upgraded audio system (along with the features included with the Premium package).

The ILX is just average among new cars for fuel economy.

We rate the ILX at 5 out of 10 for fuel economy. While its figures aren’t terrible, the ILX isn’t as frugal as many other compact offerings, especially since it requires premium fuel.

The ILX’s 24 mpg city, 34 highway, 28 combined were reasonably impressive when it debuted in 2013, but like the car itself, those numbers haven’t aged terribly well.

The 2020 ILX rates a little lower than the Audi A3’s 30 mpg combined, but compares more favorably to the Mercedes-Benz A-Class, which is rated at28 mpg combined.

Be the first one to write a review on 2020 Acura ILX
Rate and Review your car for The Car Connection! Tell us your own ratings for a vehicle you own. Rate your car on Performance, Safety, Features and more.
Write a Review
$25,900
MSRP based on Sedan
Change Style

Features
Other
See Your Price
4.7
Overall
Expert Rating
Rating breakdown on a scale of 1 to 10?
Compare the 2020 Acura ILX against the competition
Compare All Cars
Looking for a different year of the Acura ILX?
Read reviews & get prices
Related Used Listings
Browse used listings in your area
See More Used